Nextail Says the Future of Fashion Leadership Is Female

Nextail’s report says a growing number of women are taking on “the top job.”

Nextail's report says female ceos are taking the lead in 2021.

Spain-based Nextail is predicting that fashion’s future will be female-led — and the proof is in the numbers.

Nextail, a cloud-based SaaS platform that enables algorithmic merchandising decisions, today released a report that plays to the prowess of the modern fashion chief executive officer; and this woman is digitally savvy, as well as ecologically aware, the firm said.

Looking at the U.S. and Europe, its second annual report titled “Fashion’s Newest CEOs at the top of 2021” is focused on the skill-sets of more than 100 newly appointed CEOs of leading fashion brands, as well as profound transformation in retail as the industry continues to “grapple with a number of issues.”

Its report said fashion companies appointed more than 100 new CEOs in 2020 despite the COVID-19 pandemic, and those new leadership choices “show patterns of strong executives ready to meet both short and long-term industry goals.” Overall, the report points to a growing number of women “taking on the top job.”

And in spite of “overall risk aversion” and an understandable preference for highly experienced executives, fashion companies’ long-term goals are digital transformation, growth and sustainability, which has begun “appearing as a factor for hiring CEOs.”

​Nextail CEO and cofounder, ​Joaquin Villalba​, said, “This report shows that despite the consequences of COVID-19, businesses were planning for the future as much as attempting to deal with immediate issues. The hiring of fashion retailers reflects their strategies for succeeding in the new retail landscape, entrusting leadership who will lead the way toward making fashion retail a better, more sustainable place.” Nextail calls Versace, River Island and Pepe Jeans clients. 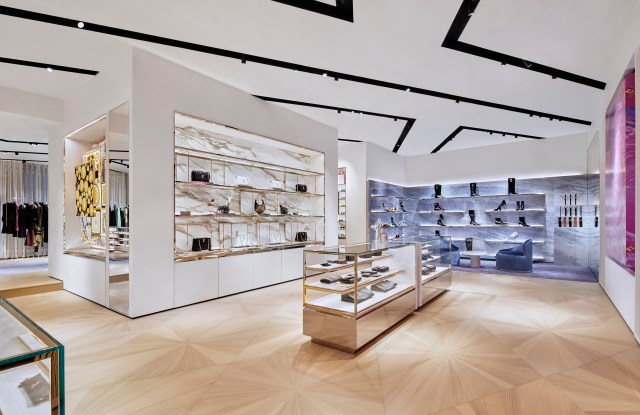 Inside Versace’s new store in Zurich.  Courtesy of Versace

The report said, “After a flurry of activity in the first quarter of the year, the appointment process slowed down until after the first set of lockdowns were over. However, the priorities seemed to remain constant: ​a deep fashion and well-rounded retail background. Sixty-three percent of hires had ​existing C-level experience​ while setting forward-looking priorities, such as ​digital transformation​ and ​sustainability​.”

Interestingly, of the CEOs who left their posts in 2020, the average time spent in the job was almost eight years, not including those who lasted only a matter of months, Nextail said.

And it appears that fashion companies are seeking a trifecta of retail expertise in very specific areas, such as product (brand, marketing and design); operations (supply chain, logistics and h.r.); and analytical (merchandise planning, finance and strategy).

The brand explained that the new hires are bringing in “increased experience” in all three of these areas compared to their predecessors and noted that when compared with outgoing predecessors, female leadership grew by 95 percent,​ reaching more than 40 percent of turnover cases, the report said, which includes Helena Helmersson at H&M, and Sonia Syngal at Gap.

The report noted that Helmersson had come in with “a strong sustainability brief” while Syngal holds an impressive background in retail operations and analytics. Nextail emphasized that “Importantly, their skill-set matches the new paradigm.”