Nike Aims to Go Farther and Faster at Tokyo Olympics

The sporting goods giant is hosting an immersive experience to showcase its uniforms and other products during New York Fashion Week.

Get ready for the Games.

Nike certainly is, viewing major business and marketing opportunities around the Olympics, when the top athletes from more than 200 countries will face off this summer in Tokyo — many of them decked out in the latest innovations from the sporting goods giant.

John Hoke, Nike’s chief design officer, said the Olympics allows the company to “reset the standards” every four years. “The world is better with sports,” he said, “and there’s no greater stage than the Olympics.”

For these Games, Hoke said there are two major “tentpoles” for Nike: the first is to offer apparel and footwear that provide athletes with measurable performance benefits backed by scientific research. The second is to highlight the brand’s commitment to protecting the planet by using sustainable materials. Nike has been vocal in its quest to significantly reduce its carbon footprint and incorporate recycled materials into its product line wherever possible.

Right now, 75 percent of products incorporate some recycled materials, the company said, and the goal, which Nike has called, “Move to Zero,” is ultimately to move to zero carbon and zero waste.

In Tokyo, this initiative will be evident in the 2020 Olympic skate uniforms for the U.S., France and Brazil that are being made from 100 percent recycled polyester, as well as the medal stand uniforms, where American athletes will wear Windrunner jackets manufactured from 100 percent recycled polyester and pants from recycled nylon with the team logo and other decorative elements created from Nike Grind recycled rubber. The shoes the medal-winning athletes will wear will be the Nike Air Vapormax 2020, which are made using 75 percent recycled manufacturing waste.

Amy Montagne, vice president and general manager of global categories for Nike, said the company views the Olympics as a watershed moment and a platform for the brand to create product that will “deliver long-term growth.” She pointed to the introduction of the Flyknit marathon running shoe at the 2012 Olympics in London as an example. The technology that led to the creation of that shoe filtered down to the commercial market and by fiscal year 2019, she said, Flyknit “drove over $2 billion in revenue.”

And the Air Max, which Nike created some 40 years ago, would be the “third largest athletic company in the world” if it were a stand-alone business, she said.

With the Summer Games less than six months away, Nike chose New York Fashion Week to take the wraps off several of its most-heralded product creations, including the next iteration of the Air Zoom Alphafly Next%, the highly touted — and controversial — shoe that Eliud Kipchoge wore to break the two-hour marathon barrier, as well as the first Olympic skateboarding uniforms and a sustainably sourced medal stand collection.

More than 100 elite and everyday athletes will don the products on the runway tonight during what the brand is calling an immersive experience that will showcase the new technology and designs that Nike’s teams of engineers and product designers have created for the Games. The show, styled by Melanie Ward, will also highlight other Nike product. Although the high-tech products are intended initially for Olympic athletes, the research that led to their creation will eventually filter down to Nike’s everyday product line. 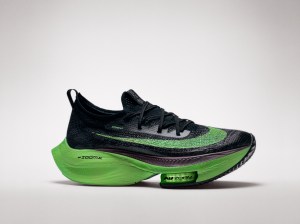 The Alphafly Next% shoe.

Montagne thinks the Nike Air Zoom Alphafly Next% has almost the same business potential as the Air Max.

The shoe Kipchoge wore, which reportedly featured triple carbon plates and four air cushions — has been banned from international competition. But the newer version, which features two Air Zoom pods, foam and a modified carbon plate, has been cleared to be used at the Olympics.

Last week, World Athletics, the governing body, also implemented a ban against wearing prototype shoes in competition. Instead, any shoe used for races must be “available for purchase by any athlete on the open retail market for a period of four months before it can be used in competition,” WA said. The Alphafly Next% will be offered for sale this month at a $300 retail price.

Tony Bignell, vice president of Next Footwear, said the company is rigorous in ensuring that its footwear meets the international standards. In fact, he said one of Nike’s training spikes has also been banned since its height is too high.

But it’s a balancing act for the company to constantly push the envelope in terms of innovation without going too far.

Bignell pointed to the shoe that the long-distance racers will wear in Tokyo, saying they far exceed the industry standard for energy return. Most shoes on the market return 60 to 70 percent of the energy from each foot strike, but the Alphafly Next% with the Air Zoom pods returns 90 percent. “If an athlete were to get more energy back, then it wouldn’t be fair,” he said. But that’s not the case with these shoes. “We’re just minimizing the gap.”

The standards are not the same for recreational athletes, so for the general public, Nike has created the Nike Air Zoom Tempo Next%, a “more democratic version” of the competition shoe, Bignell said, which will feature many of the same bells and whistles, but is designed for higher-mileage, training runs. That shoe will cost $200 when it debuts in the fall. 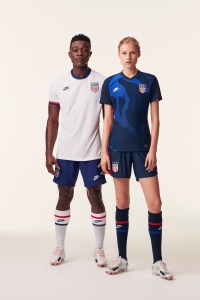 The soccer kit for the U.S. federation.  CAMPFIRE LLC

Nike’s apparel offering for the Olympics has also been updated. The Summer Games are expected to be among the hottest on record so Nike’s research and development team worked to provide enhanced temperature regulation as well as mobility. The track-and-field uniforms, for example, are created from a new Dri-Fit Aeroswift material that helps manage sweat and avoids pulling, moving or bunching.

Janett Nichol, vice president of apparel innovation, said in the past fabrics were soft and smooth, but extensive research from the Nike Sport Research Lab has resulted in garments with subtle ridges and added structure that provide 25 percent more stretch and better temperature regulation.

Similar technology is being used on the basketball uniforms as well as the skateboarding outfits.

Eventually, this technology will be available to the public as well. An example would be the compression leggings that the track-and-field athletes will wear, which will eventually be offered to the public as tights. 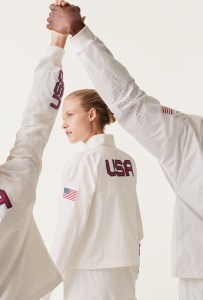 The medal stand uniforms for the U.S. team.

Since skateboarding is new to the Olympics this year, Nike had a clean slate when creating those uniforms. Knowing that skaters are some of the youngest and least traditional athletes in the Games, the company collaborated with Dutch artist Parra on the design of the garments, which range from tank tops and polo shirts to soccer or basketball jerseys with landscape-style patterns unique to each country. Regardless of color or nation, all are made from recycled polyester. 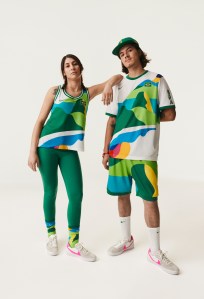 Nike believes the design of the skateboarding uniforms will resonate with fans of the sport and commercial versions of the collections will be available this summer. The medal stand jackets, which will retail for $450, will also be sold around the time of the Games.

This is just one example of how the products will live on well beyond the Olympics. “These are our springboards for the company beyond Tokyo,” Hoke said.

Another case in point is the Space Hippie collection of footwear that will debut around Earth Day and whose creation inspired the Medal Stand collection. The capsule collection is created from scrap material from the company’s factory floors. Four models will be available retailing from $130 to $180. 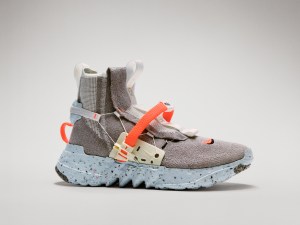 The Space Hippie collection is made from all recycled materials.

This strategy of offering pinnacle product for elite athletes and less technical versions for more commercial purposes has worked well for the company in the past. Montagne called the U.S. women’s World Cup victory last year an “epic growth driver” for the brand that resulted in the highest sales of women’s jerseys.

Hoke said that the Olympics just magnifies that opportunity. “Every four years, the eyes and attention of the world is placed squarely on sports,” he said. “But it’s just a declaration of intent and a springboard of ideas for us.” He said that even after the Games are over, the brand will continue to pursue innovation.

“We believe in the progression of sports,” he said, “and not just breaking records, but breaking barriers.”

Even though Nike continues to be the leader among sports brands, the corporation is not without its challenges. This month, John Donahoe, a former chief executive officer of eBay, is taking over from Mark Parker as Nike’s ceo. The change at the top follows several high-profile issues including charges of sexual harassment and discrimination against women as well as the shutdown of its Oregon Project running program — and the suspension of its coach Alberto Salazar — amid charges of doping and emotional and physical abuse of its athletes.

Despite these challenges, the company continues to motor ahead. In the second quarter ended Nov. 30, 2019, net income increased 32 percent to $1.1 billion and revenue increased 10 percent to $10.3 billion. Late Tuesday, the company reported however that the coronavirus in China has caused the company to close half its stores there, a move that may have “a material impact” on its operations in that region and subsequently its third-quarter results.