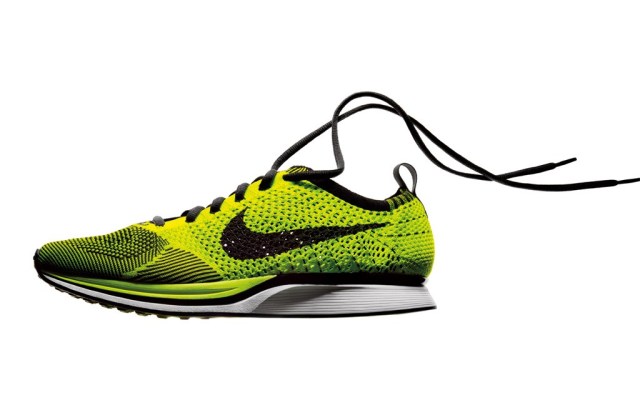 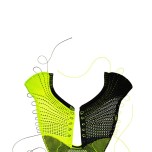 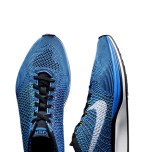 NEW YORK — Nike believes its new Flyknit sneakers, which will be released just in time for the Olympics, represent a revolution.

Touted as one of its most significant innovations of the year at the Nike Olympic Innovation Summit, held Tuesday and today at Basketball City at Pier 36 here, Nike Inc. chief executive officer Mark Parker expects the sneaker to unleash “a paradigm shift in footwear manufacturing.”

“It’s smart, fast, beautiful and sustainable,” Parker said during the summit Tuesday, where the featherweight, seamless shoe was introduced (in addition to the Pro Turbospeed Suit, Zoom Spikes, Hyper Elite Basketball Uniform and the Lunarlon collection). It’s also the most eco-friendly shoe produced by the brand to date — but the fact that the upper is comprised of just a single piece of woven polyester is its most innovative quality.

The Nikeknit technology includes a Flyknit Racer — a 5.6-ounce high performance shoe designed for a marathon runner — and the Flyknit Trainer+, a version of the above that’s been modified for the everyday athlete in a slightly heavier 7.6-ounce sneaker. Both will go on sale in July, but a limited edition HTM Flyknit collection of three sneakers will be released today at the Nike Sportswear store on Mercer Street. The latest in a decade-long collaboration between Parker, Hiroshi Fujiwara and Tinker Hatfield, the three shoes include the HTM Racer, identical in function to the Flyknit Racer, and two versions of the HTM Trainer+ (one features the Lunarlon midsole) that will retail from $160 to $175.

“It’s extremely lightweight and comfortable so it’s like a sock or second skin. Another key element is there’s almost no waste. We’re doing the right thing for the athlete but also for the environment,” Martin Lotti, Nike’s global creative director Olympics, told WWD. “I’ve designed many, many shoes, and if you compare traditional shoemaking to this, it’s completely different. This is completely automated and you can design down to the smallest millimeter for breathability — whereas as before it was crude and rudimentary. Now it’s one single surface.”

Lotti went on to describe the upper of the shoe, adding that it feels like an “engineered surface” made of multiple strands of woven polyester on a “printer”-like machine. The end result gives a look of a textured, woven sweater — in shocking neon or blue — but fits the wearer’s foot like a second skin.

Abdi Abdirahman wore the Flyknit Racers when he qualified to be part of the U.S. Olympic marathon team last month. One of the first to train in the shoes, this will be Abdirahman’s fourth Olympic games, although he’s only competed in 10,000-meter races thus far.

“The shoes have all the support you would want, but the top feels like a sock,” the athlete said. “It feels like you’re walking barefoot, to be honest.”