The average American throws out 80 pounds of textile waste a year, according to World Wear Project. And to help mitigate negative impacts stemming from that waste, retro-inspired California lifestyle brand Marine Layer today announced the launch of Re-Spun, its first capsule collection of men’s and women’s shirts created entirely from upcycled consumer T-shirts. The collection will be available for purchase on April 28.

Marine Layer said it has collected more than 75,000 shirts from consumers — the company collects shirts in its stores or online, and offers prepaid mailers — to create its Re-Spun capsule, which includes an impressive waterless manufacturing process that results in buttery soft 100 percent recycled shirts. The collection features eight retro-inspired styles, including four men’s shirts and four women’s shirts, with customer favorites such as its Ringer, Baseball Raglan and the Pocket Tee that have been updated with Re-Spun yarn, but maintain the company’s signature “favorite T” look and feel. Prices range from $52 to $92 per piece.

Founded in 2010 as a men’s T-shirt line, the San-Francisco-based brand said it is the first to create such an initiative exclusively for apparel. Michael Natenshon, chief executive officer of Marine Layer, said the company has “always tried to make the best possible products in a responsible way and part of that has been trying to find a solution to textile waste. This innovative program is an extension of that goal made possible by our awesome community and our experience developing best-in-class fabrics. Within two years, we’re shooting to have 50 percent of our styles be a part of the Re-Spun program.” The company currently operates 41 stores nationwide. 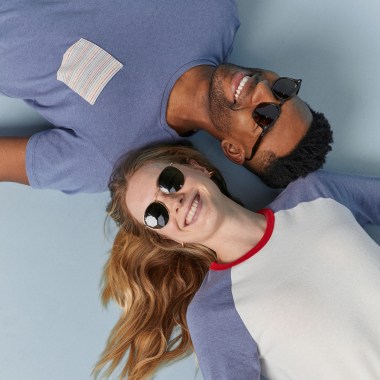 Marine Layer’s sustainability solution is differentiated by its decision to directly involve consumers in the recycling process: Within 24 hours of asking customers to participate in the Re-Spun program, the company received more than 5,000 requests to send in old T-shirts. Its multistep operation includes sorting collected T-shirts into four color groups; breaking them down; reweaving them into colored, upcycled cotton fiber, and topping off with a light sueding that enhances softness. The fibers are cleaned through a UV light-based technology that is entirely chemical free. Due to the nature of the process, each shirt in the collection slightly varies in color, and impressively, no water or chemicals are used at any point throughout its material development, as there is no need to dye the garments. All in all, the manufacturing process saves an average of 2,700 liters of water that is typically needed to produce one shirt, the company said.

Molly Getty, Marine Layer’s vice president of design and development, said, “Creating Re-Spun was the most complicated fabric development we’ve ever done. It took years, but the outcome is so worth it. Re-Spun maintains the quality and softness of the garment.” Marine Layer added that any old T-shirts that could not be repurposed were broken down and used for other applications — true to form, none of them were discarded. Natenshon told WWD, “The majority of shirts we hope to recycle, as long as they’re 40 percent cotton. But the ones that are below that threshold or have too much embellishment that make it not possible we can still properly recycle those and turn them into insulation, or something like that.” He added, “We’ll take everything, because I think we have a better chance of finding the greatest and best use for those old shirts.”

And the brand will soon embark on a road trip with its first mobile store, a converted shipping container that will travel across the country on a six-month tour to promote its Re-Spun program whilst engaging consumers through retail events and Instagram contests, as well as an interactive event at its new store in Austin, Tex. Natenshon told WWD, “This program I think is so cool because it gives [clothes] a second life. People don’t want to throw [their clothes] away, they want to do something good with it, or put it toward something else.”