Research from NRF shows that consumers want quality and price most, but will back out of a purchase if it isn’t convenient.

The meaning of convenience in shopping is ever evolving.

For its winter 2020 consumer view, NRF gathered insights from consumers to uncover the importance of convenience and determine the future role of connivence for the retail industry. When looking at convenience, NRF says “consumers send a mixed message,” finding that only one in 10 consumers mention convenience but nearly all report abandoning a purchase because the experience was inconvenient.

In fact, according to NRF’s findings, 83 percent of consumers find convenience while shopping to be more important today than it was just five years ago. And more than one-third of consumers reported feeling they have less free time now when compared to five years ago.

“Our lives are getting busier every day and not many people have the luxury to spend hours at the grocery store or department store looking for specific items,” one consumer told NRF. The company found that 52 percent of consumers make at least half of purchases are influenced by convenience.

And according to Greg Portell, global head of the consumer practice at Kearney, convenience shouldn’t come free. “Retailers have allowed the consumer to prioritize convenience without having to make an economic trade-off,” Portell said. “The concept of free delivery masks what the consumer preference really means.”

In a recent report by WWD, it was reported that retailers will be doubling down on BOPIS, self-checkouts, faster deliveries and improving we sit navigation in the name of better convenience. 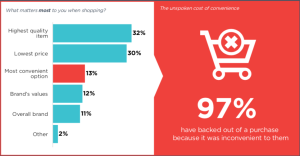 Joel Rampoldt, managing director at Alix Partners, told WWD that he sees BOPIS was a top trend in the last year, saying that it is a trend that will continue to grow. “We’ve seen the biggest players make some very aggressive moves in that direction and consumer acceptance seems to be very high,” Rampoldt said. “People like not only the convenience of it but the control. They like the fact that it can be economical in some categories because you end up doing less impulse purchasing.”

According to NRF’s report, 70 percent of consumers found BOPIS had improved their experience. “Strategies like BOPIS ensure the shopper has a convenient experience regardless of channel,” noted NRF.

“We think convenience is going to continue to drive a lot of the decisions that happen in retail today around converging channels, converging markets, etc.,” Rod Sides, vice chairman and U.S. leader of retail and distribution at Deloitte, told WWD. “Those who win at making life easier are going to win in the market overall. We believe it’s going to continue to be a trend in 2020.”

As previously reported by WWD, Deloitte’s 2020 Retail & Distribution Industry Outlook report, which was released at the NRF trade expo in New York, also referenced convenience as key, saying “in 2020, retailers will need to up their game with stores that can help deliver more convenience to the consumers’ order fulfillment journey.”

“I think there has been a lot of interesting, competitive moves made by major players and I think that will be an area that will continue to be a battleground,” Sides said. “So, the idea there is to build efficiency and at the same time build on the idea of convenience and doing it in a cost-effective way.”

NRF’s survey found that consumers do find shopping to have become more convenient, with 86 percent reporting shopping today is more convenient than five years ago. On consumer told NRF personal expectations for convenience are higher now than ever, saying recent experiences had caused them to become accustomed to convenience and become “spoiled.”

The company further reported that nearly all — nine in 10 — consumers are “more likely to choose a retailer based on convenience,” while 36 percent felt “retailers don’t always live up to their convenience expectations.” NRF notes that today, consumers are aware of innovations that increase convenience and therefore look for them to be provided by all retailers.

Consumers shared with the company retail “wishes” which included an online tool to locate items in-store, assistance in locating sizes and trying items on, and pickup areas at the front of the store for online orders.