Andrea Grilli, CEO of Off-White licensee New Guards Group, said during an event staged in Milan to present the spring 2021 collection that he expects further growth in 2021 for the brand.

The first look of the Off-White spring 2021 collection.

MILAN — Waiting is not part of Off-White’s vocabulary.

The brand’s spring 2021 collection was streamed on Tuesday and selected items from the lineup was instantly available online and in stores, as part of the company’s new strategy to be more in sync with the seasons.

As reported, Off-White’s licensee New Guards Group last year revealed to WWD that the brand, founded and designed by Virgil Abloh, was adopting a new calendar of product deliveries.

Involving the entire pipeline, from the supply chain to marketing, the new organization was set up in eight months, leveraging New Guards Group’s “well-oiled machine,” said Andrea Grilli, chief executive officer of New Guards Group’s operating firms. The executive touted the group’s flexibility and dynamic organization, which allowed it to optimize its structure.

Grilli was speaking at a Milan industrial venue where Off-White staged a fashion show and live performances to reveal the spring 2021 collection through a global digital event, dubbed “Imaginary TV,” in the presence of a very limited group of mask-wearing journalists, all tested for COVID-19 at the entrance. The brand skipped Paris Fashion Week, where it has regularly shown, in favor of this format in the Italian city, home to an Off-White design studio.

The interface was custom built for the showcase and Off-White’s TV offers a number of channels and networks, which point to the concepts behind the collection.

A group of performers contributed to creating the experience, wearing looks from the collection. Abloh, who also holds the role of artistic director of men’s wear at Louis Vuitton and was not in Milan given the travel restrictions, paid tribute to creativity and, true to his beliefs, promoted inclusivity. To name a few, in one area, Damiano Afrifa played Franz Schubert on a piano surrounded by grass running wild and wearing a tracksuit and sneakers from Off-White x Air Jordan; musician Caterina Barbieri composed electronic music wearing the brand’s new eyewear; Sofia Frigerio and Giorgio Bissi donned Off-Active athletic wear to show their skills on an indoor rock-climbing wall, and Leonardo Totino, Bufer, Snitch and Zoow drew graffiti on a stage that later served as the runway for the models. 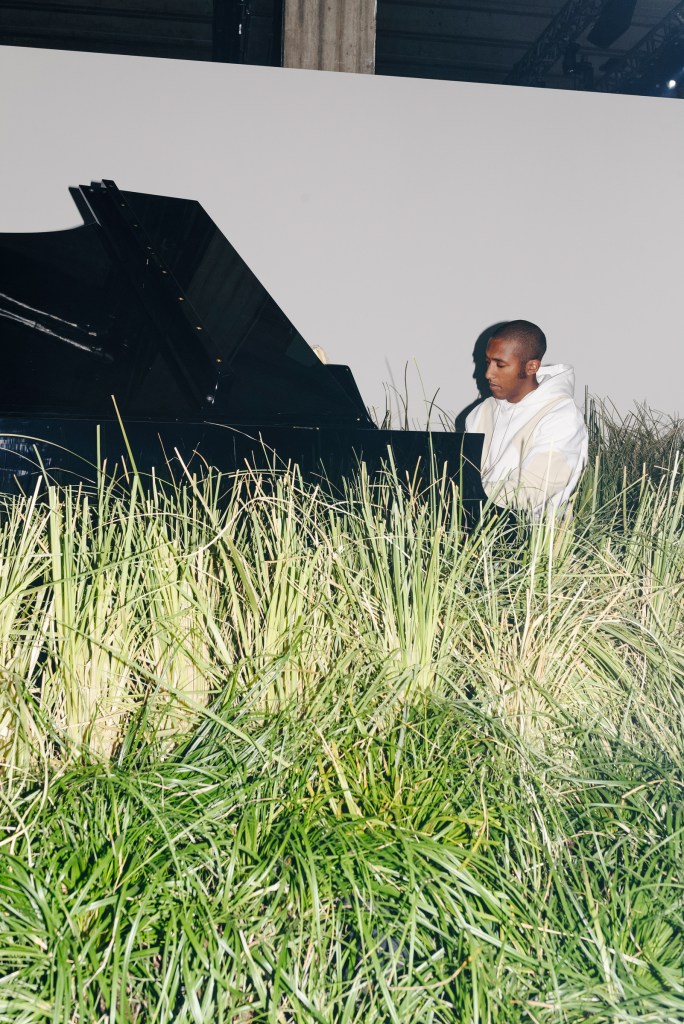 Artisans showed how to create Off-White’s new Burrow Bag, an evolution of Abloh’s “Swiss” and “meteor shower” concepts, debuting with a perforated shoulder bag shape with a punch-holed graphic treatment.

The collection, titled “Adam Is Eve,” will become available via three product drops between February and the end of May.

“This is a digital-driven brand, consumers feed on news,” explained Grilli. Armed with studies supplied by Farfetch, Grilli believes “customers don’t want to wait six months for these products, it’s too long and there are so many uncontrollable events that impact consumers.” This strategy will help increase customers’ curiosity and their engagement, he contended.

Off-White’s online business grew exponentially last year to represent 16 percent of sales, up from 3 percent in the previous year. Of course, Grilli said, Farfetch also contributed to this growth with its digital expertise, and the pandemic accelerated the changes. Grilli declined to provide a sales figure for the brand, but said it has the potential to reach the 1 billion euro benchmark.

While the digital channel is key for Off-White, the company is not neglecting its retail distribution. Last year, despite the pandemic, the brand opened key stores in cities such as Milan; Miami, in the Design District — a space designed by Abloh and AMO, the research and design branch of architecture firm OMA led by Samir Bantal; in London’s Sloane Street, Knightsbridge, developed in collaboration with spatial designer Andrew Taylor-Parr; Singapore. and Bangkok. Currently, there are 60 Off-White stores globally.

Grilli revealed Off-White will open a flagship in Paris in June on Rue de Castiglione. Covering 6,480 square feet, it will be the biggest store yet. “We are also thinking of resort locales, such as Ibiza,” he said.

Europe is the biggest market for the brand, accounting for 40 percent of sales, followed by Asia and the U.S., each representing 30 percent of the total.

Asked in particular about China, Grilli said the region grew 10 percent in 2020, benefiting from new openings. Off-White has also landed on WeChat and Weibo, which he said were “fundamental” in the Asian market. Also relevant is rolling out dedicated capsules. “We are a global brand, but local initiatives are key,” he observed.

He admitted a “bullish” attitude, expecting growth in 2021 after a year that was “challenging” but that still helped the brand see gains.

The group counts 400 employees, increasing its headcount by 150 last year — despite the pandemic, he noted.

After launching a homeware collection, Off-White is planning new categories, Grilli also revealed, while boosting the visibility and marketing of handbags and sneakers, for example. The latter category already accounts for 20 percent of sales. Working on sustainability with Farfetch, Grilli was proud of the brand’s sustainable packaging and replacement of plastic details with sugar paper.