Outlook in China Brightens as Textile Factories Begin to Reopen

Textile industry members and experts weigh in on progress made in China as coronavirus begins to level.

The coronavirus is starting to hit the U.S. hard, but has softened in China.

As fashion industry stakeholders eagerly await news regarding coronavirus’ impact on the Chinese textile manufacturing sector, the situation to beginning to brighten.

And while the flow of goods in the U.S. and Europe has halted as retail stores shutter, and spring items are shipped back, news from China offers light at the end of the tunnel.

Sources said textile factories in China are reopening, and the workforce is regaining its footing rather quickly. Stanley Chao, managing director at All in Consulting, a firm that helps western companies do business in China, told WWD, “The [factories] I speak with are in the Guangdong area. About 80 percent of workforce is back; the 20 percent not returning are from the Wuhan area that are still locked down. They are running about eight weeks behind schedule and expect to make up that by mid to late April.”

Chao added, “Guangdong province has been more affected by Wuhan lockdown given the proximity. Some of the textile factories in Shanghai and the north are fully operational with everybody back. They are running ahead of Guangdong factories.”

On the technology front, companies such as Chain of Demand, a predictive analytics company based in Hong Kong that uses artificial intelligence to help retailers and brands predict sales, minimize markdowns and overstocked inventory, have found that textile businesses are looking at permanent solutions for temporary problems.

The firm told WWD, “Textile and apparel products are still in production at the moment, as factories gradually reopen. However, capacity is still very low, as many workers remain under lockdown in their hometowns. Because of this, businesses have started to evolve by using more technologies in daily operations from mobile conferencing to advanced inventory solutions.” 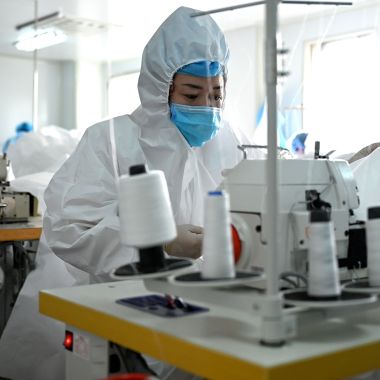 Chain of Demand said companies are thinking of leaving China entirely: “Businesses have been considering moving production away from China, but as we see with the pandemic, other sourcing countries are also affected as part of the global supply chain. Closer collaboration with suppliers is an alternative and more effective solution that we have seen as an upcoming trend.”

And while Wuhan has been the geographical center of focus throughout the coronavirus pandemic, cities that are economically driven by textile manufacturing have also been heavily affected, according to Lior Ohayon, chief executive officer of Hush, a weighted blanket company. “As some people are aware, the brunt of the coronavirus hit China in Wuhan. While Wuhan is one of the major hubs of textile production in the country, there are many others, such as Shaoxing County, considered the fabric capital of China.”

Ohayon added, “Despite some closures, restrictions outside of Wuhan have become slightly more relaxed and production is on the rise again. For many businesses, product shortages are shipping, rather than production-related. The lesson companies are taking from this is to keep larger supplies of Chinese manufactured products at the ready. This does not always mean need more space at sales locations, but at more accessible warehouses.”

And some factories that have taken well-advised “breaks” are now back to work, according to Edith G. Tolchin, the owner of EGT Global Trading. Tolchin is the author of several books on sourcing and manufacturing in China, and has manufactured and imported textile products from China since 1990.

Tolchin told WWD, “A China textile factory I have been working with for the past 10-plus years had advised us that they were taking a break for about two weeks, [around mid]-February. They did [take a break] and reopened the factory for production of baby textile items the last week of February. To my knowledge, they are current with orders and are shipping my client’s next container load shipments within the next week — I am in daily contact with the factory.”