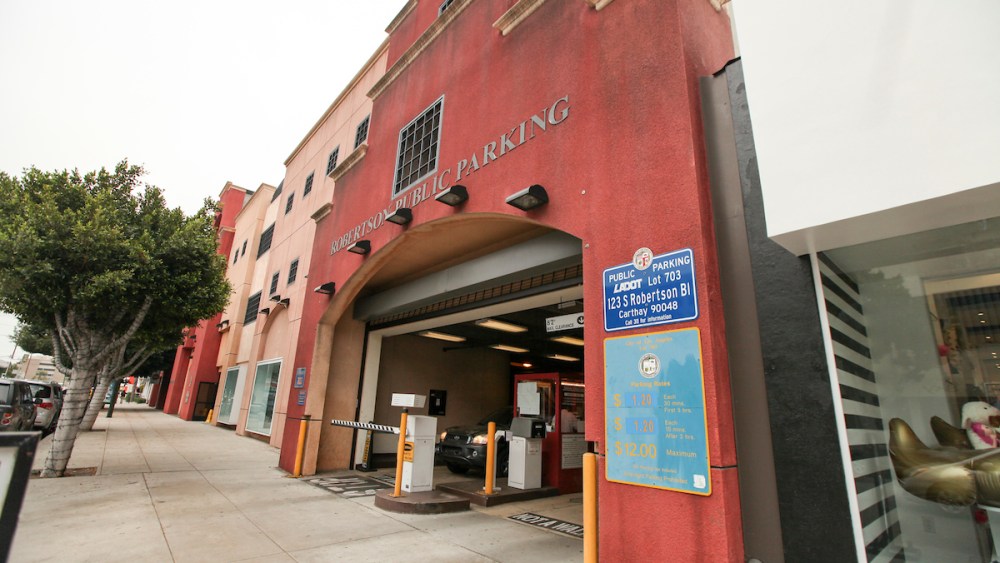 LOS ANGELES — Parking and politics aren’t mixing well for Robertson Boulevard businesses, leaving some to question whether retailers have become pawns in the lead-up to the city’s March elections.

The recently opened campaign headquarters on Robertson Boulevard of Jesse Creed, who is running against incumbent Paul Koretz for a chance to represent the fifth district on the Los Angeles City Council, was followed with a surprise for the street’s other tenants: the removal of a two-hour free parking garage program some allege was taken away to stop Creed’s volunteers from using it.

Free parking is gold in Los Angeles, where gridlock and circling blocks to find an open metered spot is factored into all commute times. For Robertson Boulevard, it’s perhaps even more critical as some hope for a revival of the occupancy-challenged street. Offering the first two hours free in the structure — a common carrot in places such as Beverly Hills or Santa Monica — is seen as a way to woo people to the street.

“Free parking on Robertson is imperative to the success of the street and small business owners like us especially,” said Alissa Jacob, the cofounder and ceo of the multibrand concept shop Reservoir. “We are competing with Beverly Hills’ free parking and have many customers who are incentivized to come here only if there’s available free parking for a portion of their time on the street. The street is really suffering, with many more homeless people than ever, and if the city doesn’t do something now to help businesses, then this street will continue to suffer and more businesses will shut down or relocate.”

At issue is what the city of Los Angeles calls lot 703, the parking garage it owns at 123 S. Robertson Boulevard. Between Dec. 15 and Jan. 15, the structure offered the first two hours of parking free. Business owners reported anecdotally a lift in foot traffic and sales during that time.

A spokeswoman for the fifth district said the office received positive feedback about the free parking program and extended it another 15 days and could not lengthen it any further without changing policy. The fifth district office is now working with the Department of Transportation on studies of how to best use spaces in the garage and possibly make the two-hour free program permanent, the spokeswoman said.

The two-week free parking program was approved for the holiday via a council motion, but will not be returning, a Los Angeles Department of Transportation spokesman said.

That’s a different story than what was told to Fraser Ross, the founder of Kitson and owner of the new boutique concept Kitross on Robertson Boulevard. Ross has attempted to work with the city since May beginning with Manav Kumar, deputy counsel to Mayor Eric Garcetti, before being shuttled to Garcetti’s senior director, William Chun. He was passed on to the office of councilman Paul Koretz, who oversees the fifth district where Robertson is located, and has since been working with John Darnell, district director for Koretz.

Darnell, according to Ross, said at the onset the free parking would be extended every two weeks before swinging to full-time in March. Ross had a free parking sign made after he said he was told the city couldn’t afford to make such signage.

“Why do I have to make signs for the city? I’ve got enough to do. I have to pick up the garbage, get the tree [on the sidewalk] trimmed, get the phone booth [on the sidewalk] down. When was the last time Paul [Koretz] has walked the streets of Robertson to see the problems first hand?” Ross said.

The sign’s lettering was slashed, by an unknown party, last week with the end of the free parking program.

“It looked like we possibly had his [Koretz’s] attention, but since Creed’s office [opening], I’m having difficulty talking to his office,” said one merchant on the street, requesting anonymity.

Ross on Monday started a petition to bring the free parking back and expects to get to 1,000 within a week. He also, per his style, dressed his store’s window with a hard-to-miss statement accusing Koretz of taking away the parking. “Pay for play. All talk, no action,” part of the window reads.

Creed, the incumbent running against Koretz for the council, said he moved onto the street because he had seen the thoroughfare languish and took up the space as a statement of what he said was solidarity with the other business owners. He called the sequence of events — free parking available when his headquarters moved in Jan. 1 and then no free parking Jan. 15 — “suspicious.” One other observation since his move onto the street few would argue with: “The merchants here are desperate for help,” Creed said.

“There’s no ownership and Mayor Garcetti and Paul Koretz were down at the march on Saturday and they’re saying stand up for your rights and fight the fight. Well, we’re fighting the fight against you [politicians],” Ross said, pointing to American Apparel, BCBG Max Azria Group, The Limited and other retailers shuttering doors. “I mean, come on. You can see there’s a problem in this brick-and-mortar retail business. You’ve got to invite people to stores and make common areas again.”

Instead, what people see are empty and sometimes dirty storefronts, some of that city-owned real estate.

Bob Esho, the owner of the optical and sunglass store Optx, has been on the street for some 15 years. He previously occupied the storefront, owned by the city, located next to the city-owned parking garage. He shared the space with a doctor who decided he wanted to exit Robertson in 2015. Esho said he asked if the city could re-write the lease, removing the doctor from the contract, and was told no one was available to redo the paperwork. He closed in July 2015 and inked a lease across the street a few months later at a building owned by a private individual.

Nathan Sager, who owns Sager French Salon, has expressed interest in leasing Esho’s previous space on Robertson. It would have been a homecoming of sorts, with Sager French on the street for 17 years before relocating to Beverly Hills after losing its lease when the building underwent major renovations. Sager was told by Darnell he would have to apply for the space via a request for proposal process through the Department of Transportation.

The city expected the RFP to post by mid-August, according to e-mails between Darnell, Chun and parking and LADOT analyst Rene Sagles. Darnell followed up with Sagles in November, at which time he was told the RFP would be released the first week of December. On Dec. 2, a follow-up e-mail between Darnell and Sagles indicated what Sagles called a “small setback we need to resolve” and that the RFP would be out the following week. The RFP has not yet been posted.

“I don’t understand it,” Esho said. “Why wouldn’t you lease the space and have a tenant there paying….There’s no accountability. Who are you going to hold accountable for it? They will blame each other [at the city].”

And even as lease deals get inked, merchandising of the street’s tenants needs to be done with a more careful eye, Sager added, factoring in services and lessons learned from the street’s past boom and then bust.

“The street’s lost so much of the retail and we understand that you cannot support retail without services,” Sager said.

It didn’t help that big brands — Chanel, Ralph Lauren and Lululemon, among others — moved in years ago, boosted rents and later left with the recession and rise of competing streets offering cheaper prices. It wasn’t good for real estate and it wasn’t good for a street aimed at trendsetters and neighborhood shoppers, some would say.

“These people [big brands] don’t really look at recessions,” Sager said. “These people have an agency that is looking for them and what is the hottest location. None of these owners stand on the street and see what people are walking them. They have location scouters.”

“I’ve been here for 20 years. This street, I’ve never seen it so bad,” said Sylvia Diaz, owner of the restaurant Cuvée. “Any little thing we can get that would increase our business, I’m shocked that the city doesn’t get it.”

Diaz said longtime customers come in and regularly ask her what happened to the street, referencing the heyday when celebrities shopped there and tour buses rolled through. Today, she’s contemplating whether she should relocate following a rough six months capped by a November and December that were the worst months the business has had during its run on the street.

“It’s never been this bad,” she said. “I’m working harder. I’m trying to come up with new ways of drawing in business and it’s hard. I’ve never had to cut [employee] hours before. These employees of mine, it really breaks my heart.”