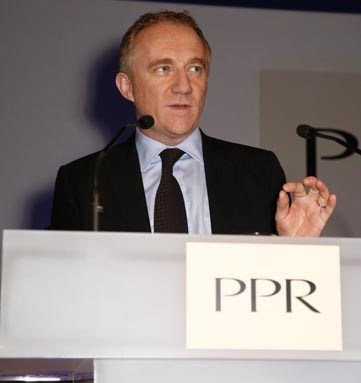 PARIS — PPR, the French parent of Gucci Group, on Thursday reported stable profits for the year despite a slowdown in sales growth in the fourth quarter due to the worsening world economy.

The growth came despite relatively flat sales in the three months ended Dec. 31, when revenues inched up 0.1 percent to 5.68 billion euros, or $7.49 billion. At comparable exchange rates, revenues fell 1.5 percent.

In the luxury division, fourth-quarter sales rose 3.4 percent at Gucci, 13.6 percent at Yves Saint Laurent and 11.8 percent for “other brands,” which include Balenciaga, Boucheron and Stella McCartney. Sales at Bottega Veneta slipped 2.3 percent.

The results beat most analysts’ expectations and PPR stock gained 7.2 percent Thursday to close at 43.82 euros, or $55.14, on the Paris Bourse.

Pinault told a meeting of analysts and press here that PPR nipped potential losses in the bud by reacting quickly to the “exceptional” economic environment, which started to eat into luxury in July.

Pinault said PPR implemented rigorous cost-cutting measures, which it will continue this year. As reported Thursday, those measures include cutting some 1,200 positions at the Fnac music and book chain and Conforama furniture stores. PPR is also looking to close unprofitable stores and sell underperforming brands, including the Bedat & Co. luxury watch business.

Despite the worsened climate in the second half of the year, Gucci Group reported recurring operating income improved 9 percent to 731 million euros, or $1.08 billion.

However, recurring operating income at the cash-cow Gucci brand declined 3 percent to 625 million euros, or $919.6 million, as the fashion house suffered declines in its watch and jewelry business. For the full year, Gucci sales improved 1.4 percent to 2.2 billion euros, or $3.25 billion. Not including the negative effect of the timepiece and jewelry business, sales improved 6 percent.

Meanwhile, Yves Saint Laurent broke even for the first time since it was acquired by Gucci Group as the legendary house sold more Muse and Downtown bags and narrowed costs. Sergio Rossi also entered the black.

Pinault said cost-cutting measures within the luxury division would be targeted at reducing unnecessary costs. “We are very conservative with our budgets [for 2009],” said Pinault. “They are based on the hypothesis of sales of the same value [as last year].”

At the Gucci brand, investments will be cut 13 percent, with most capital expenditure funneled into strategic store openings in Asia, where business continues to grow, albeit at a slower rate.

“This year will be difficult for the world economy,” said Pinault, who declined to predict business trends through the rest of the year.

He noted business in January was better than at the end of the year, perhaps due to the Chinese New Year happening in January rather than February last year.

Robert Polet, ceo of Gucci Group, agreed it was impossible to predict luxury sales in coming months. “Visibility is extremely limited,” he said. “What will happen is the most important question on our minds.”

Some markets are holding up better than others. Pinault said Greater China continued to produce double-digit sales gains and that South Korea was robust.

Elsewhere, business is “still dynamic” in South America, and Eastern Europe and the Middle East are holding, said Pinault. Japan, whose economy has been under pressure for years, continues to be difficult, he added.

Polet said Gucci would continue to open units in China. “Our 33 [Gucci] stores in Greater China are among our best performing stores in the world,” he said.

Polet stressed the crisis did not merit a major reevaluation of strategy at the world’s third largest luxury group. At Gucci, for instance, he said there were no plans to introduce less expensive products to tempt customers to spend.

“Only if we make desirable — irresistible — products will we succeed in this market,” he said. “It won’t be by making average products at low prices. We are here to make people dream.”

Pinault said cost control measures at the luxury division included less advertising, a job freeze and a reevaluation of the bonus structure.