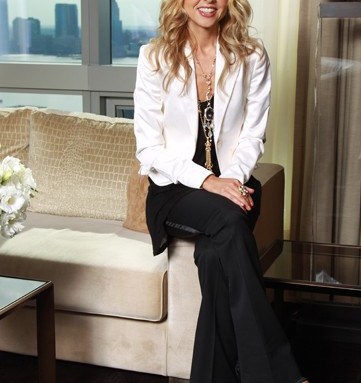 NEW YORK — First there were designer celebrities, then celebrity designers and now the latest phenomenon: stylists-turned-celebrities-turned-designers.

Rachel Zoe has just jumped into that pool, thanks to a deal with LF USA, a subsidiary of Li & Fung Ltd. The Rachel Zoe Collection will be a lifestyle brand — contemporary accessories, shoes and apparel, for now, with the possibility of home down the line — that will launch in better department stores, specialty stores and e-commerce worldwide for fall 2011. Sales projections were not available.

Click here for a look at Rachel Zoe’s personal style >>

It’s a huge deal for Zoe, not to mention LF USA, in that it marks a major strategic move by the manufacturing and sourcing giant into both the celebrity designer arena and in launching a line that would be completely created and designed in-house. “We see tremendous opportunities to support Rachel Zoe’s talent as a designer and to build a new, differentiated brand concept,” said Rick Darling, president of LF USA.

In introducing her own collection, she joins the likes of L’Wren Scott, Andrea Lieberman and, most recently, Lori Goldstein, who does her own line for QVC (as does Zoe).

“Subconsciously or consciously, my whole final goal — I don’t want to say final because that sounds very like it’s the end — but I would say my ultimate dream scenario was to be on the design side,” said Zoe, dressed in what appeared to be her serious business-woman attire: a white Tom Ford for Gucci jacket, black Alexander Wang T-shirt, black Balmain tuxedo pants and Louis Vuitton platform sandals.

Nothing is designed yet, but Zoe, who is in the process of hiring a design team, said, “You will definitely see me in the clothes. Like, you will absolutely see my trademark pieces. I’ll definitely do faux furs and incredible leather jackets and great trousers. But I’m catering to a broader audience.”

Thanks to her Bravo reality show, “The Rachel Zoe Project” (season three airs Aug. 3), that audience is largely built in. The second season drew an average of 1 million viewers, who are by now well versed in Zoe’s signature look: famously overaccessorized and anchored in sunny, Seventies glam. Add to that her sparrowlike frame and tumbling blonde hair, a million strands of which are carpeting the carpet of her suite at the Trump Soho, and the package has made her an easy target. She’s a girl girls love to hate.

“I’ve been burned more times than one could count,” said Zoe. “Too many times. That’s my own fault for being a bit naïve, but I can tell you it won’t happen again. I can tell you that you just got to keep 10 eyes open. You do. And, I think, as a woman, people want to see women go down a little quicker.”

But while the media have fixated on her weight, Zoe has leveraged her public persona into a brand, literally. Rachel Zoe Inc. was established in 2005 when she was just a celebrity stylist (current clients include Kate Hudson, Cameron Diaz, Anne Hathaway, Eva Mendes, Jennifer Garner and Demi Moore), and now comprises four subdivisions: styling, media (print, broadcast and digital), product development and consulting (she has an ongoing gig with Piperlime.com). In the last year, her Los Angeles operation has expanded from one to four offices with 14 full-time employees, including her husband, Rodger Berman, a former investment banker, now president of Rachel Zoe Inc., and Brad Goreski, her top assistant and flamboyant co-star of the “The Rachel Zoe Project.”

“One time at a fashion show, an editor said to me, ‘Did you just come out of, like, thin air? You just appeared and now all I do is see your name and hear this and that, you’re sitting in the front row next to me at all these shows and dadadadada.’ I said, ‘I’ve been working my ass off for 15 years,’” said Zoe, who went freelance at age 25 and has since become part of the trend of celebrity stylist-turned-celebrity-turned-designer. Just don’t tell her that.

“I would never consider myself a celebrity. Ever. Yes, I have a TV show and I realize that I am in the public eye because of that. Doing a TV show is a very instrumental part of my business and of building my brand. One hundred percent, and I recognize that part of it.…But because I work with celebrities I’ll never think of myself like that. Cameron Diaz is a celebrity, Kate Hudson is a celebrity, Demi Moore is a celebrity — you know what I’m saying?” she said, and then promptly described a situation typical of celebrity: “I go about my everyday life, working like everybody else does, but the things that get difficult is when I’m walking on the street or if I’m in a mall or, like, whatever, and people are, you know, if they come up screaming and taking a picture and shaking and all these things.

“Tom Ford said to me the first time I ever met him — we kind of bonded over the fact that we are Virgos, and it was never enough, and perfectionism and all of that. But I think it’s one of those things that you think in your mind, maybe a flash of light comes through and says, ‘Oh, I’d love to have a store-in-store at whatever store.’ And all of a sudden, like a year after or whatever, that actually happens. You don’t stop and say, ‘Oh my God, great. OK, I’m done.’”

In 2007, at the height of her tabloid frenzy, Zoe released her best-selling book, “Style A to Zoe.” The TV show followed in 2008. By 2009, she had launched rachelzoe.com; a daily newsletter, The Zoe Report (“free daily glamour for your inbox”), and a collection of accessories and outerwear with QVC. If she’s just one of its many personality-driven collaborations (others include Isaac Mizrahi, Joan Rivers and fellow stylist Goldstein), Zoe is a top performer.

“I think we can safely say that’s she’s sold over 100,000 units in a short time with relatively few appearances,” said Doug Howe, QVC’s executive vice president of strategic planning and merchandising. “Our customers are very savvy, they shop all over and they’re very plugged into what’s happening in entertainment and celebrity circles. There’s certainly a recognition [with Zoe], but you can see the true passion that comes across for the items when she’s on air. It’s real. It’s very authentic.”

“The bottom line for me is if I’m passionate about it, I will sell it like crazy because I love it,” said Zoe, who is decked in her own QVC jewelry. Anyone who’s ever tuned into “The Rachel Zoe Project” knows Zoe can be seen nearly stroking out over an earring, a ruffle or a handbag several times over the course of an episode. In fact, her propensity for overblown superlatives, emphatic repetition and general Sweet Valley High-like language (“Bananas!” “I die. Do you die?”) are as much a trademark as her oversize sunglasses. If she plays it up for the camera, Zoe’s enthusiasm comes across completely genuine, and endearingly earnest. When discussing her future plans, she mentions Oprah Winfrey as someone she admires. She’d like to have at least one child, if she can find the time. She actually pulls off lines like: “I just want to put out the most incredible product and have people love it and be excited about it. And I want to have an entire lifestyle brand. Everything. No limits. No limits! I hate limits. Give me a limit, I’m going to break it.”

But behind the fabulous fashion and “Oh my God!,” Zoe knows how to operate. “There are things you do for your business,” she said of her Twitter account (over 181,000 followers and counting). “Trust me: I was never someone who felt the need to reconnect with someone from 20 years ago. I have enough friends right now and I barely have time to see them.”