The designer thanked his team, his family and WWD for the honor and support. 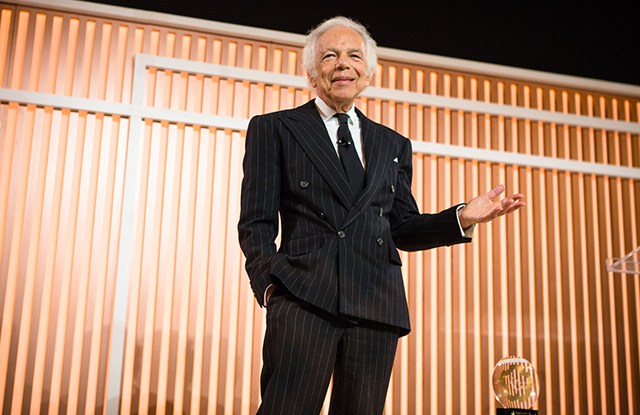 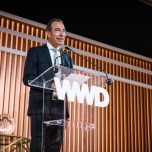 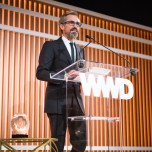 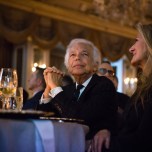 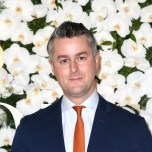 The first day of the summit was capped off by the first WWD Honors awards, which recognized best-performing companies of the year; corporate citizenship, and creative leadership and presented the inaugural John B. Fairchild Honor to Ralph Lauren.

The cocktails, awards and dinner drew a room packed with industry executives; designers ranging from Marc Jacobs and Anna Sui to Jason Wu and John Varvatos, Todd Snyder to Joseph Abboud, and members of the late Mr. Fairchild’s family, including his wife, Jill.

In presenting the John B. Fairchild Honor to Ralph Lauren, WWD editor in chief Edward Nardoza said selecting the first recipient of the award generated no debate. He cited Lauren’s “staggering” list of achievements, such as being the inventor of lifestyle dressing, the first designer to have his own store, his home line, the Rhinelander Mansion, fragrances, the Double RL Ranch, digital shoppable windows, his restaurants (and the delicious corned beef) his charitable giving and the restoration of Old Glory.

Lauren was clearly moved and said, “You dream you’ll have all this happen to you, and this is it.”

He then turned to Mr. Fairchild’s children in the audience and said, “Your father was a genius. I remember years ago I had a great show and got a call from John Fairchild, who was a tough critic, a tough guy and a fun guy, and I said, ‘John, how did you like my show?’ He said it was ‘genius.’” Lauren couldn’t wait to see WWD the next day, expecting the cover and a rave review. “Women’s Wear came and there was no greatness. Where did it go?”

Lauren said Fairchild took a trade publication and turned it into a fashion show and a place to be seen, doing it with excitement, pleasure and a love of the game. “I love the game,” added the designer, who feels younger than ever. “When I look in the mirror I’m 32,” he said.

One of the great things about the honor, he said, was when he walked into the room, he saw so many familiar faces and families that he’s known over the years. “I appreciate everything that’s ever been done for me,” said Lauren.

“I love the passion, I love the work. I come in every day and I’m excited to be in my office,” said Lauren. Everything he’s ever done, he’s done with his heart. “I love the people I work with. I love the team,” he said. He also loves the new people who have joined. His advice to them? “Bring your heart, bring your passion and love what you’re doing.”

Lauren also said he loves his wife, Ricky. “She never gets older, she gets more beautiful,” said Lauren. “I’m getting choked up all of a sudden. I love my family, I love my wife and I love my work. It has all been very special to me.

“I appreciate this. I love it and I’m proud of it and will cherish it. You thank me, but I thank you for everything,” he added.

Toledano had spoken earlier that day at the summit and was supposed to return to the Dior offices after his session for a day of meetings. “I stayed almost all day [at the summit] seeing all these new, young entrepreneurs speaking of e-commerce, the Internet and social media,” he said. “It was really amazing seeing different people thinking out of the box and it was really instructive for me.”

One question that came up through the various presentations struck him: Will Millennials buy luxury? “I have one hope for them, that they do enjoy luxury. Why?” said Toledano. “Because luxury comes with peace, with economic growth, with hope. I hope for peace, I hope for economic growth so that this new generation will enjoy luxury, expect luxury or dream of luxury as we have done ourselves.”

He thanked his wife Katia, who was there with him; his father, who passed away a few months ago; his teams, past and present, and his boss Bernard Arnault, recalling the day the luxury titan appointed Toledano as Dior’s ceo. “He said to me, ‘You will enjoy being the boss for one hour, maybe one day, but tomorrow you will feel different,’” said Toledano. “I went through crises. I went through a lot of fun, a lot of excitement, but every morning I go to the house so excited. I never got bored one day.”

Inditex — parent of Zara, Massimo Dutti and other brands — received the Corporate Citizenship Honor for its dedication to sustainability.

In accepting the award, Felix Poza, global director of sustainability for Inditex, said the honor was “a particular source of pride” since the company strives to “provide quality fashion at affordable prices, [but] what’s even more important to all of us is that we’ve achieved this goal with a focus on sustainability.”

He said the award acknowledged the company’s “commitment to society as a whole,” noting that it was “a collective effort of a motivated team.”

He said Inditex knows that “people are what really matter, but we are not alone in this effort. We have learned so much by sharing our experiences and listening to our stakeholders over the years.” And while the award was a testament to the company’s work so far, Poza said it also “represents a challenge to Inditex to continue to push ourselves to greater sustainability.”

The company has a good start on that and already hosts 500 retailers on its namesake web site and works with 150 stand-alone designers. The platform is expected to drive sales this year of $800 million, up from $500 million last year, connecting consumers everywhere with brands from independent retailers around the world.

Farfetch is working now to continue to drive fashion’s digital evolution and, as Fowler said, “be revolutionary in our ambition and our actions.”

The WWD Honor for best-performing company, large market cap, went to Pandora where, ironically, Mr. Fairchild’s son Stephen is the creative director. In presenting the award to Pandora ceo Anders Colding Friis, Stephen Fairchild first spoke movingly about his father, describing what he did as “revolutionary” since, through WWD’s coverage, he created the modern fashion world. Expressing thanks to all of those in the room, including his mother and family, Stephen Fairchild then introduced Friis, who said, “It’s a very special honor to receive this prize from Stephen Fairchild. Stephen was instrumental in the development of Pandora.”

Friis said Pandora is a brand born in the kingdom of Denmark in the year 2000 and offering quality jewelry at affordable prices in 2000 concept stores and 10,000 points of sale. “We are still only a teenager, as Stephen says.…This is a highly valued recognition of the 20,000 Pandora people. Every day, we all go to work to make the company a little stronger.”