Retail consolidation and the pandemic have spurred the decades-long Manhattan mannequin maker to reinvent.

Mannequins are an endangered species, and who knows that better than Ralph Pucci of Ralph Pucci International.

“We’ve been creating mannequins for 40 years. But little by little, the business declined. It began decades ago with retailers buying mannequins from China, cheaper versions, and then there have been years and years of retail consolidations and store closings,” said Pucci.

Pre-pandemic, mannequin orders were lined up with Nordstrom, Macy’s, and El Palacio de Hierro in Mexico. However with the coronavirus outbreak, store renovations were abandoned, the economy tanked, and the retail orders were canceled or put on hold. This year, Pucci’s mannequin production has trickled down to almost nothing.

“It is a big disappointment. Now mannequins represent 1 percent of my business. Five years ago it was about 25 percent,” said Pucci. “It’s not like the old days when we would produce 150 mannequins a week.” 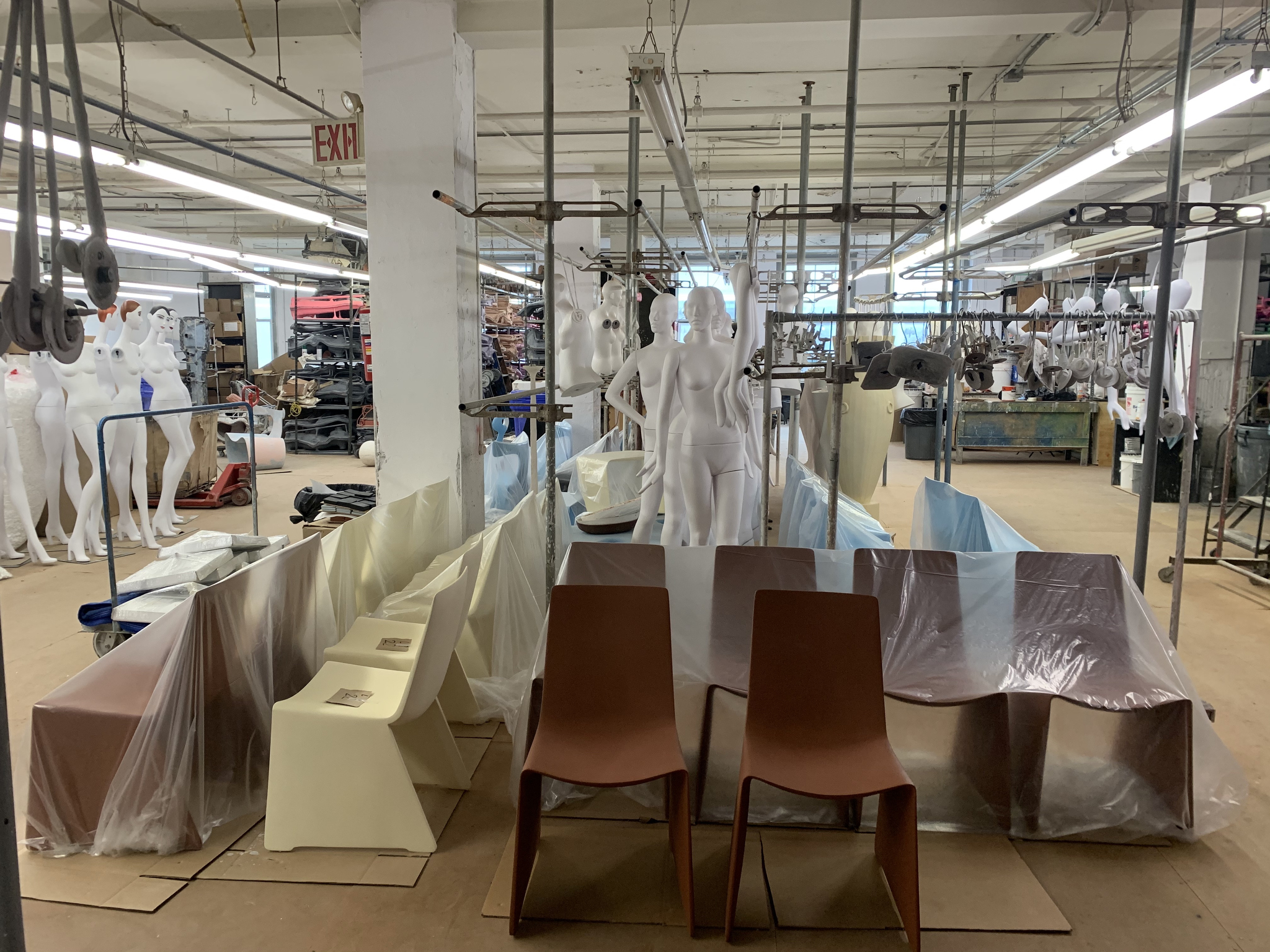 In October, Pucci finished transforming his 16,000-square-foot factory floor at 44 West 18th Street in the Chelsea section of Manhattan into part gallery, part sculpture studio and part workshop, to grow his fledgling furniture manufacturing business, launched over two years ago. He’s currently producing about 25 chairs and five tables a week, and a small number of mannequins.

“With the pandemic and the decline of retail, I only needed 8,000 square feet of factory space. I cut it in half. But we wanted to maintain the essence of the factory, so we kept the wood floors and painted them white, and left the exhaust ducts and the big industrial fan,” both remnants of a “spray booth” where mannequins would be spray-finished in water-based paint.

Within the gallery is a glass-enclosed sculpture studio. It’s in public view for visitors to see Michael Evert, Pucci’s longtime resident sculptor, creating prototypes for the furniture and mannequins. They’re made in clay from sketches, then plaster into a fiberglass mold.

Behind a door, there’s the 8,000-square-foot workshop, where furniture is manufactured as well as mannequins. On a recent visit, there were mannequins lined up including a cluster designed by Rebecca Moses. “They’re being shipped to the Austrian department store Kastner & Ohler. It was one of our last mannequin shipments, pre-pandemic. Hopefully, there will be more in the future,” Pucci said. 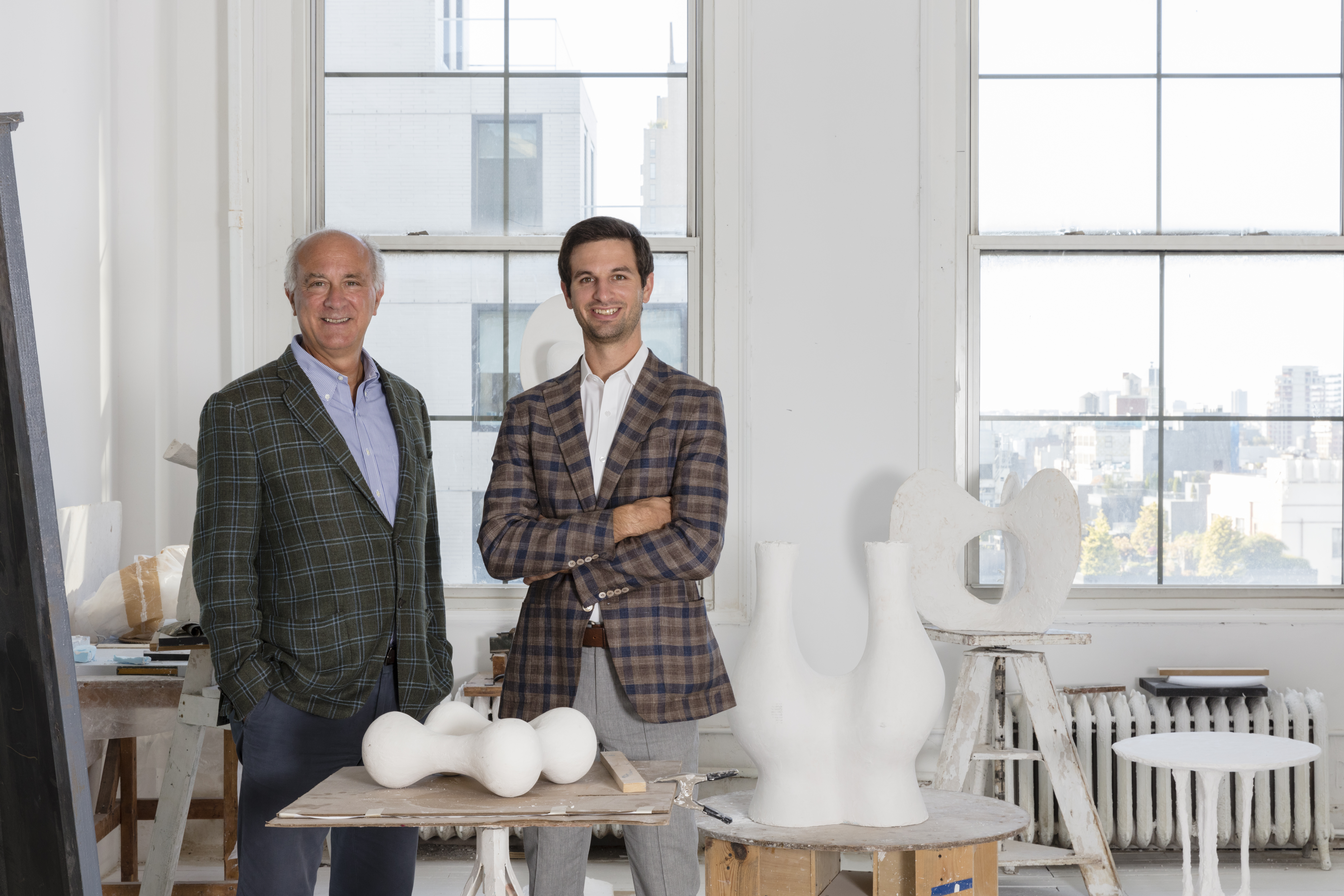 The family-owned Pucci firm was founded originally as a mannequin repair shop in 1954 by Ralph’s father, a plasterer, and Ralph’s mother, who created wigs. About 26 years later, Ralph evolved the business into producing mannequins, but not of the garden variety. They’ve been among the most stylized and upscale of all, with Pucci not only designing mannequins in-house but also calling upon world-famous creators for designs. Andrée Putman, for example, designed Art Deco-inspired mannequins manufactured by Pucci for Barneys New York; Maira Kalman created “feel-good” mannequins for department stores, and Lowell Nesbitt created Robert Mapplethorpe-inspired mannequins resembling Greek and Roman sculptures. Pucci has also partnered with Kenny Scharf, Ruben Toledo and Anna Sui, among others. Veruschka, considered the original supermodel, and Christy Turlington in a lotus position to capture the yoga craze became Pucci subjects, to suggest women of strength and wellness.

In 1990, Pucci began showing high-end furniture by leading creators, priced from $10,000 to $150,000 a piece. He began with Putman, followed by Chris Lehrecke, Patrick Naggar, Herve Van der Straeten, India Mahdavi, Eric Schmidt and Jim Zivic, developing either one-of-a-kind pieces or those manufactured in Europe to sell to multiple clients.

Little by little, Pucci’s showroom grew eclectic in its display of furniture, as well as sculpture, photography and lighting, while continuing with mannequins. It’s become a type of cultural center where the artists, designers and retailers would gather for openings (when there wasn’t the global health crisis) with Ralph Pucci, the impresario of it all.

Aside from the 11th floor in 44 West 18th Street, Pucci occupies the penthouse and ninth levels, each 16,000 square feet, for a total of 40,000 square feet of showroom space at the site. Pucci also has showrooms in Los Angeles and Miami.

Over two years ago, Pucci started manufacturing contemporary furniture, adding a “midlevel” price range to the offering. Furniture is currently by far the bulk of his business, with volume increasing with the conversion of the factory space and with consumers spending more of their discretionary dollars on furnishing their homes rather than on traveling, or on wear-to-work apparel due to COVID-19-related sheltering in.

Some of the same creators that Pucci has represented over the years are now designing furniture for him to manufacture. Among them is Naggar, who has created indoor/outdoor fiberglass furniture including chairs for $2,750 and benches for $3,000. He’s currently an artist-in-residence, in the Pucci sculpture studio every day working closely with Evert.

Also on display are Paul Mathieu eight-foot-tall sculptural floor lamps in plasterglass, priced $10,000, and $3,000 chairs in a form of fiberglass, as well coffee tables with a “black foundry” pigment, priced $7,500, and plasterglass sconces.

John Koga, a Hawaiian sculptor, has created chairs, lighting and tables, in plasterglass, ranging from $3,000 to $12,500. 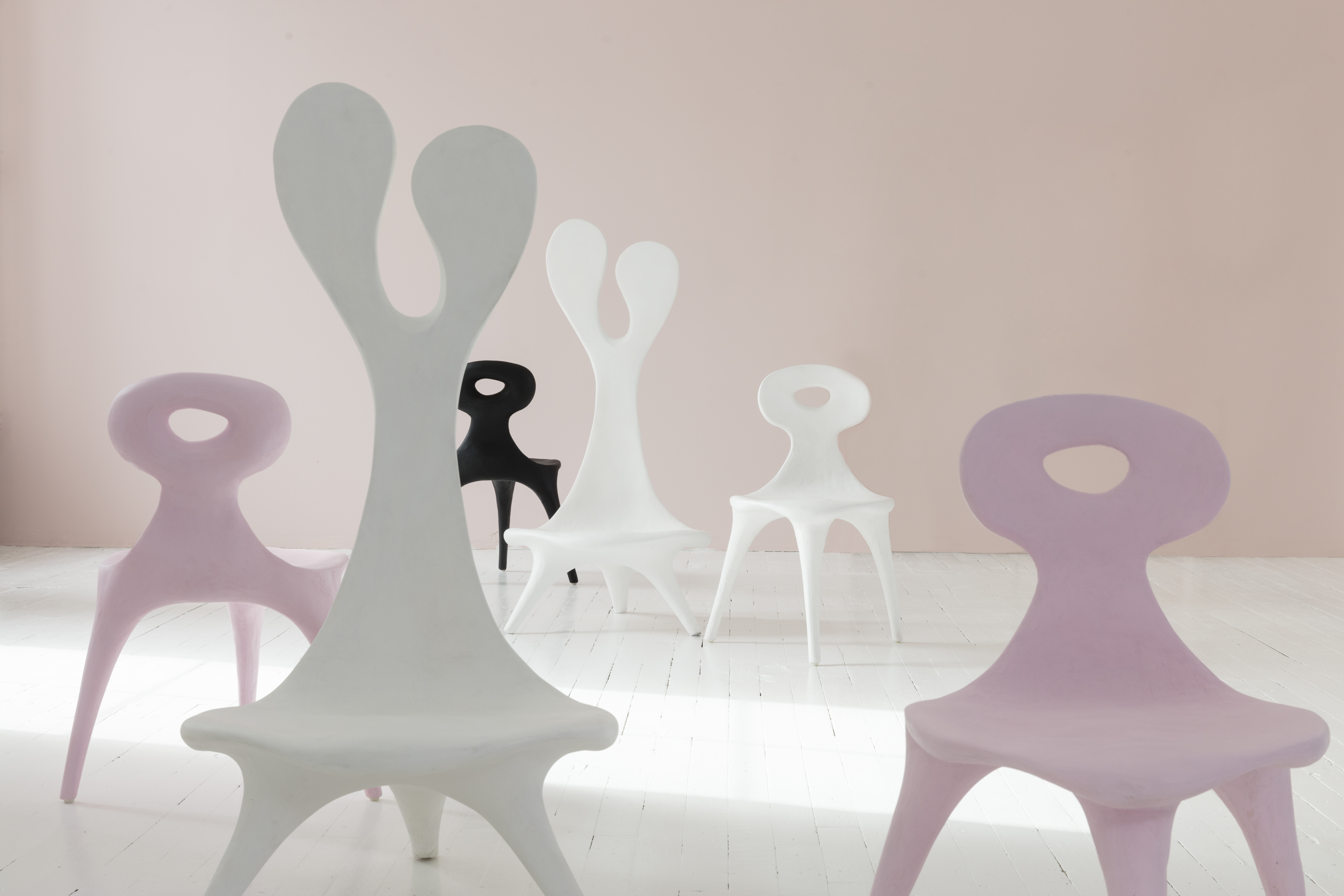 Eric Schmidt, who also works in plasterglass, has a collection of chairs and tables, which will be available in 2021.

The artists develop the concept and sketches, and collaborate with Pucci and Evert to finesse the design and come up with clay prototypes and fiberglass molds to cast the furniture, though it’s not like assembly-line production. “Each piece is hand-sanded, so some pieces might be smoother than others, or a little lighter or darker, or have some imperfections, which we like. So none are the same, which makes it more of an art form,” said Pucci.

The furniture has the look of plaster, which people like, but plaster isn’t practical for furniture so it’s structured in plasterglass, which gives it strength and durability, explained Pucci. “I’m a big fan of Miró , Picasso, Giacometti and Arp, who were all very fond of working in plaster,” said Pucci.

“Our factory for mannequins has provided us with opportunities in the furniture world,” Pucci said. “It hasn’t been a difficult transition. We didn’t have to retool.

“You have to reinvent yourself. But I love the idea of working with new designers, a new medium and a new market.” 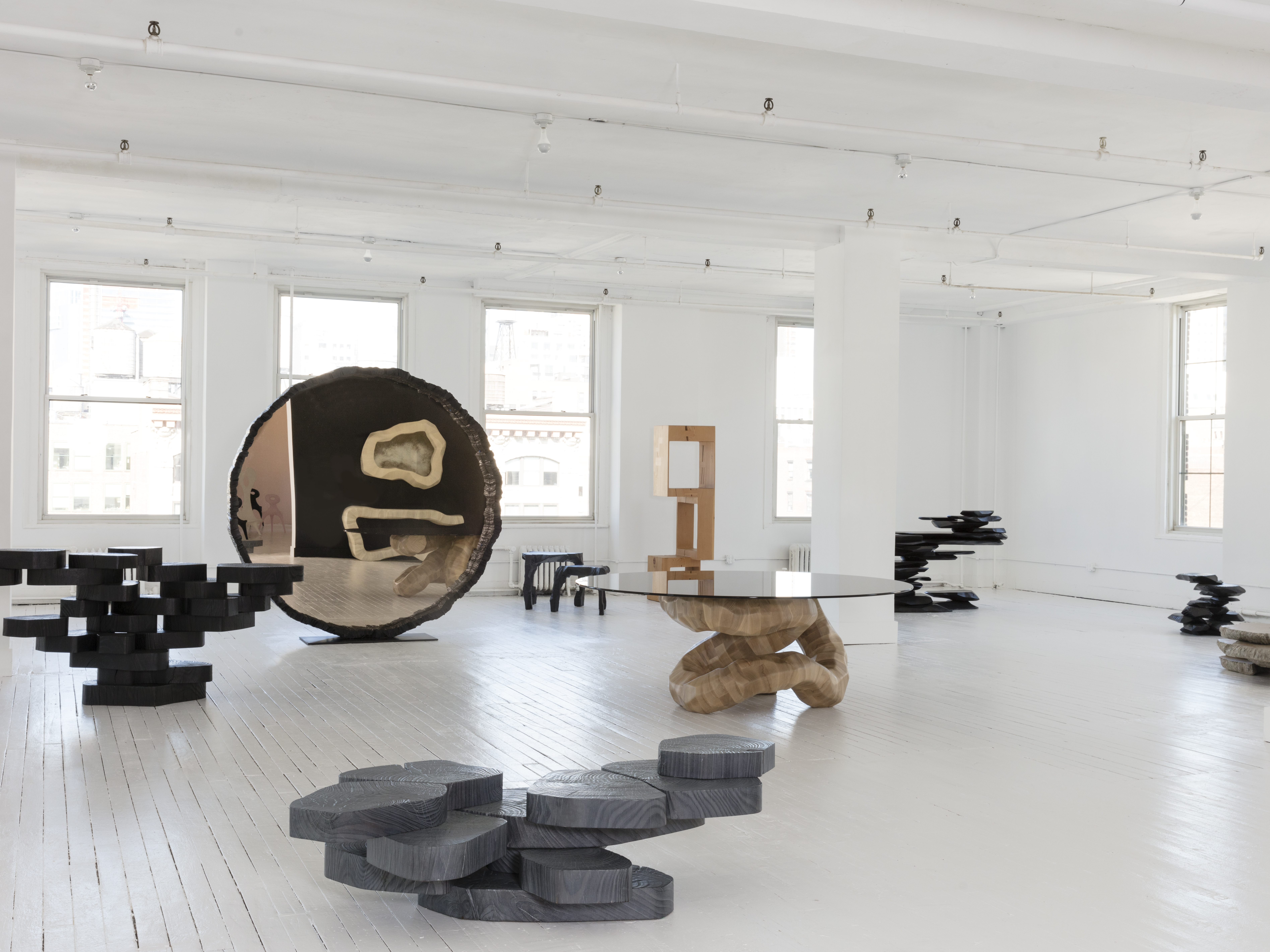