Retail sales last month fared worse than the shift in the timing of Easter could explain, touching off concerns about first-quarter inventories and margins. 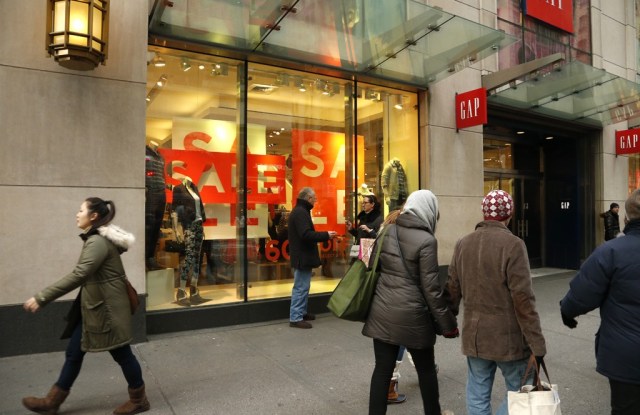 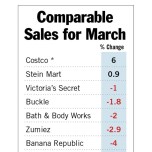 Retail sales last month fared worse than the shift in the timing of Easter could explain, touching off concerns about first-quarter inventories and margins as well as the biggest sell-off of retailers’ stocks this year.

Reporting retailers, excluding drugstores, had a 2.2 percent increase in comparable-store sales for the month, better than the 1.4 percent gain expected. But the positive end result came almost exclusively from Costco Wholesale Corp.’s results, which included a 6 percent increase in U.S. comps.

The only other company to post a positive comp was Stein Mart Inc., with a 0.9 percent increase that fell well below the 3.5 percent gain anticipated.

With only about three weeks before the end of retailers’ first quarter, the pressure on stores to make up for lost ground is likely to be intense, meaning price promotions are likely to increase.

Finishing out the day on a disappointing note after the markets closed, Gap Inc. reported a 6 percent decline in March comps, with Gap and Old Navy each down 7 percent, more than expected, and Banana Republic off 4 percent, better than anticipated. Despite what chief executive officer Glenn Murphy termed a “challenging” month, Gap reaffirmed its full-year guidance for earnings of $2.90 to $2.95 a diluted share, but said first-quarter gross margin would be down from year-ago levels, and the dip in margins greater than the one suffered in the fourth quarter, when the closely watched metric fell 280 basis points to 34.8 percent of sales.

By the time Gap reported, however, the damage had been done. Retail stocks suffered their worst declines of the year as the S&P 500 Retailing Industry Group dropped 26.40 points, or 3 percent, to 860.66, eclipsing the 1.6 percent decline of the Dow Jones Industrial Average and 2.1 percent slide of the S&P 500. Pummeled by concerns about the biotech sector, the Nasdaq fell even more — 3.1 percent.

Expectations were exceedingly low going into the day, given the shift of Easter into late April from late March last year, and continuing reports of weak traffic. Even though a majority of stores exceeded bearish estimates, there was little in the way of encouraging news about traffic, spending or the emergence of a fashion trend as frigid weather became the exception rather than the rule late last month.

Referring to the anticipated drop in gross margin at Gap after it reported its numbers, Richard Jaffe, analyst at Stifel Nicolaus, said, “This is due to the severe storms that resulted in many store closures in February, which pressured sales and contributed to the already elevated inventory levels” at the start of the first quarter.

“The margin erosion suggests that management is taking aggressive steps to drive sales and bring inventories down,” the analyst wrote.

Putting the best face on American Apparel Inc.’s 5 percent decline in comparable stores, which included a 9 percent drop in same-store revenues, Dov Charney, chairman and chief executive officer, cited the late Easter and cool temperatures in much of the month, before concluding, “We are encouraged by a rebound in online sales with an increase of 16 percent this year on top of a 24 percent increase last year.”

Year-to-date comps at the troubled vertical retailer are down 5 percent, with store comps down 7 percent and online sales ahead 3 percent.

American Apparel also said it would no longer report comps on a monthly basis and instead include information on them with its quarterly financial results.

Overall, Janney Capital Markets analyst Adrienne Tennant saw some cause for optimism in what she called “promising” fashion trends, such as “pretty, feminine” looks, including floral patterns, vibrant colors and skirt-and-top separates, and she did have high hopes for a stronger April as temperatures moderated and Easter provided a bit of a bump.

“We believe this pickup in demand is likely to be short-lived and believe there could be some ‘bleeding’ of margin pressure from excess inventory from [the first quarter] into [the second quarter] and believe [second-quarter] estimates are at risk as well but to a lesser extent” than in the first quarter, she wrote, noting that she expects inventory levels to remain problematic at least through the second quarter.

“They sell things you need, including gas and other non-discretionary items,” he said. “Disposable income growth has been constrained, and to the extent that consumers had extra spending money at all, a lot of it went to pay for higher fuel prices and greater fuel use. That sort of sucked the spending oxygen out of the room.

“There’s really no way around it in the first quarter — inventories are going to be high and margins lower. Even with a good April, there just isn’t enough time to make up what’s been lost,” he said.