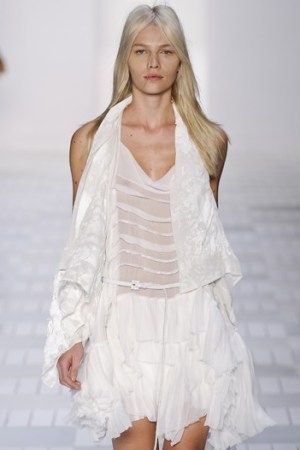 Brazilian fashion is on a roll.

In a robust economy that’s expected to grow by 5 percent this year, Rio de Janeiro’s two biannual fashion weeks racked up healthy sales. And because the local currency, the real, has appreciated far more against the dollar than the euro in the last year, buying appetite among Europeans was particularly strong.
Dresses in all lengths, colors and novelty prints, were the stars of the show.

The two salons host different exhibitors and are open only to trade visitors, their guests and the media, not the general public.

Rio-à-Porter featured 169 exhibitors, 33 percent fewer than the 253 at the June 2010 event. The drop was because there was 20 percent less warehouse space at Rio’s pier available to organizers for staging the event. Organizers attributed a 20 percent drop in orders from domestic buyers totaling 743 million reais ($465 million) to the space crunch and fewer vendors. However, a slight increase in foreign buyers attending resulted in a 19 percent increase in orders from them ($25 million), compared to the year-ago fair.

The latest Fashion Business was focused solely on domestic buyers, having decided to invite only a handful of foreigners. Organizers said that a booming economy and a growing middle class here prompted them to orient the event exclusively to the domestic market.

Fashion Rio/Rio-à-Porter, attracted 90,000 attendees, on par with last year. Around 90 percent of the event’s 27 invited foreign buyers came from Europe, with the rest from the U.S., the Middle East, Oceania and elsewhere in Latin America.

Because the real appreciated against the euro by only 1 percent since June 2010, Europeans found merchandise at Rio-à-Porter affordable.

But even the 14 percent depreciation in the U.S. dollar against the real since June 2010 didn’t dissuade one of the three U.S. buyers who came.

“Even though the dollar’s devaluation against the real has impacted our profit margin on Brazilian fashion,” said Bryan, “there’s still a market for quality, creative and colorful prints, wholesaling for up to $200, for the Palm Beach and Hamptons boutiques we supply.”

Tradewinds, which became the exclusive U.S. distributor of Totem five years ago, bought 110 samples from that brand, including dresses in a coffee-bean print ($78) and in an African tribal print ($85).

Mart Van de Weyenberg, owner of Double Check, a Dutch-based fashion distributor, is also buying 200 samples from Totem for boutiques in Holland that cater to a younger clientele, like a short jumpsuit with a sailboat print and a tunic dress with a green wave print, both $58.50.

“These summery Totem prints don’t necessarily say ‘Rio’, but they have the soul of Rio at an affordable price,” said Weyenberg. “Other Rio-à-Porter brands had very stylish young women’s fashion but out of my price range, like Alessa’s strapless dresses with prints of Murano vases ($154).”

Maryrose, a Dublin distributor to 80 Irish boutiques, is buying 40 samples from Züe, including a multicolor geometric print dress ($50), and Katmos’ shift dresses with butterfly print ($85).

“In Europe, I can’t find the quality fabric with the bright colors and bold prints that Irish women want to wear in the summer,” said Mary-Rose McGeough.

Lyn Gardner, owner of Square, a boutique in Bath, England, bought AnaMaria’s long open-backed dresses with novelty stretch tops ($165). “My clients need versatile day-night dresses, and AnaMaria provides this with dresses that can change shape and fit,” she said.

At Rio-à-Porter, B Original, a shop in Tauranga, New Zealand, is buying only from Natural Cotton Color because the brand’s hand-made apparel uses non-dyed cotton or cotton dyed with natural pigments.
“Our clients are environmentally aware and like no-frills fashion,” said Deborah Paz, owner of B Original. “So we’re buying the brand’s beige checked jumpsuits ($61) and its brown and white summer dresses with macramé tops ($50).”

Madman, a Madrid-based distributor to midrange shops, bought cotton jersey dresses from Bintang for around $71.

“These summer dresses are very stylish and will retail for 120 euros [$171] in Spanish boutiques, where young women won’t spend more than 150 to 200 euros [$214 to $285] for a summer dress,” said Flaminia Guarnieri Vives, Madman’s sales manager.

Other foreign buyers at Rio-a-Porter stuck to bikinis.  Michèlle Belau, a chain of 10 boutiques in Peru, picked up Salinas, a top beach brand.