In the past year, Amazon customers ordered more than 1 billion fashion items on the mobile app, according to a company spokesperson, one reason why the online giant is getting into the luxury fashion game.

A still from Roland Mouret's "No Show" film to mark the brand's launch on the Amazon Luxury Stores app.

LONDON — Just like Alexa, Amazon is always listening, and responding to what it hears.

Amazon revealed its new, by-invitation Luxury Stores platform earlier this week with virtual shops-in-shop from Oscar de la Renta and Roland Mouret, and said it would shape this latest proposition around customers’ demands.

Asked why the company was so interested in luxury fashion — a difficult, elitist market dominated by a handful of longtime players — an Amazon spokesperson said the reason was simple: In the past year, Amazon customers ordered more than 1 billion fashion items on the mobile app.

“Fashion is important to our customers, therefore it’s important to us. We’re always listening to, and learning from, our customers, and we were inspired by feedback from Prime members who wanted to be able to shop their favorite luxury brands in Amazon’s store. We want to surprise and delight customers with engaging shopping experiences, and feedback from customers will help Amazon expand and enhance Luxury Stores.”

Regarding the company’s decision to launch a by-invitation model for eligible Prime members in the U.S. only, the spokesperson said Amazon was “obsessed with creating the best shopping experience. Sometimes we launch new features and experiences to a limited number of customers so we can listen to, and learn from, their initial feedback.”

The person added that Amazon opted to put Luxury Stores in a private space on its existing app because it’s easy to navigate, and said there is much more to come. “We look forward to welcoming even more luxury fashion and beauty brands who wish to tap into Amazon’s innovative, content-driven tools to reach and engage more shoppers.”

Amazon’s proposition may not be for all fashion luxury brands, but it’s proving irresistible for some, including Mouret, the second Luxury Stores launch partner and the first independent British brand to join Luxury Stores.

Mouret opened his shop and, to mark the occasion, screened a new CGI film called “No Show,” which he created with Amazon and which features clothing but no models, and zero carbon footprint.

In an interview, Mouret said his new alliance with the digital giant reminds him of another big decision he made two decades ago.

Mouret was one of the first designers to join the then-fledgling e-commerce site Net-a-porter, “when nobody said it would work. But I am always challenging myself to envision what the future should be, and how designers can sell their creativity.” 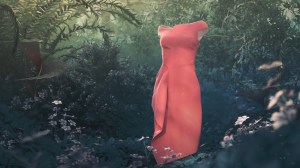 A still from Roland Mouret’s “No Show” film with Amazon Luxury Stores.  Image Courtesy of Amazon and Roland Mouret

He described Amazon as “the next frontier” for luxury fashion online. “At the moment — in my gut — it feels so right. It’s part of the reset of the fashion industry.”

The worlds of fashion and retail may have been turned upside down since Net-a-porter, now a market leader and part of a 2.43 billion euro division of Compagnie Financière Richemont, first launched, but Mouret said a designer’s challenge remains the same: “It’s about how to bring your creativity to a product, and how to make sure that product gets sold — and worn by someone.”

Amazon’s luxury proposition arrives on the scene at a time when the traditional wholesale model is under pressure, and e-commerce is on the rise. The online giant is aiming to convert swaths of Prime customers into fashion and luxury shoppers, using its data, marketing and logistics know-how.

Mark Langthorne, chief executive officer of the brand, said he and Mouret both believe, “more so than ever, that e-commerce is extremely important for the Roland Mouret brand. Amazon offers a unique partnership and business model, backed up by cutting-edge technology and breathtaking logistics. They are also uniquely placed to connect the dots between e-commerce and entertainment in the luxury sector.”

Mouret pointed to Amazon’s “close relationship with the consumer” and said he’s eager to be part of its first, virtual shop-in-shop concept. He said he was free to design the shop exactly the way he wanted it, and did not have to conform to a look, as he would with a traditional department store concession. 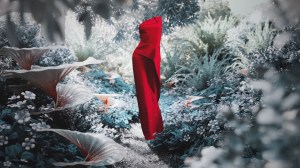 A still from Roland Mouret’s film “No Show” with Amazon Luxury Stores.  Image Courtesy of Amazon and Roland Mouret

As reported, Amazon is understood to be giving the brands full control over the look and feel of their virtual stores, allowing them to sell as much as they please, control when or if they go on markdown and — crucially — leverage Amazon’s speedy delivery and customer service platform.

Mouret said he plans to embrace Amazon’s “View in 360” service, which dovetails with his own approach to design. He makes clothes up to a British size 20, which is equivalent to a U.S. size 16.

Amazon, he added, will also allow him to penetrate further into the U.S., already his largest market.

Two years ago, Mouret shut his townhouse store at 1006 Madison Avenue in Manhattan as part of a wider reorganization of the business, which at the time was streamlining and putting a greater focus on e-commerce, digital and wholesale.

He said his relationships with current partners, such as Mytheresa, Harrods, Selfridges, Net-a-porter and Saks Fifth Avenue remain intact, and he’ll continue to operate from his London headquarters on Carlos Place in Mayfair. As reported, the company is also looking for outside investment, up to 50 percent of the business.

The new Mouret shop on Amazon will carry a selection of the designer’s pre-fall 2020 collection as well as a series of exclusives. The selection will be sold in limited quantities and offer classic pieces in step with Mouret’s commitment to a slower-paced fashion cycle, according to Mouret’s company. 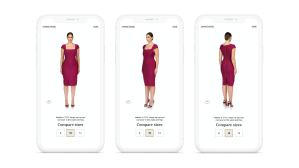 As reported, the designer canceled his fall 2020 collection due to the impact of COVID-19. He then cast a fresh eye over the runway looks he showed in London last September, and in February, regrouped them into mini collections destined for delivery from June through October.

Lockdown, he said, also gave him the opportunity to reduce waste and excess inventory, bring his collections more in line with the weather and “re-adapt” to the needs of the customer.

His pre-fall collection is filled with origami-style folds, draped and twisted crepe; asymmetrical shapes and a few signature body-con silhouettes.

To mark the launch of his store on the platform, Roland Mouret and Amazon have created a film called “No Show.”

Mouret and Amazon worked with Sylvain Labs, Alain Sylvain and the London-based CGI artist Ondrej Zunka, to create a “utopia” where animated outfits stroll around and landscapes are transformed by their movements, reacting to every step. Five Roland Mouret looks are featured, including tailored separates, gowns and dresses, each outfit displaying three-dimensional curves.

Mouret said the “No Show” film plays on Amazon’s “anywhere-anytime” convenience, and added he was proud to create a fashion experience with “zero carbon footprint.” The music featured in the film is by the English singer-songwriter and musician Marc Almond. 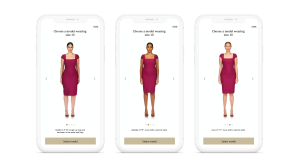 Oscar de la Renta was the first designer to open a store on the app earlier this week and is stocking the pre-fall and fall 2020 collections, including ready-to-wear, handbags, jewelry, accessories and a new perfume, with children’s wear coming soon.

“We are excited to offer luxury brands the services and technology to build an inspiring, elevated customer experience,” Christine Beauchamp, president of Amazon Fashion, said earlier this week. “We look forward to growing Luxury Stores, innovating on behalf of our customers, and opening a new door for designers all over the world to access existing and new luxury customers.”

Asked how it planned to compete with the multibrand fashion sites such as Net, Matchesfashion and Farfetch, the Amazon spokesperson said the company not only has the power of technology, but is willing to give the brands freedom to sell the way they want.

“Brands independently make decisions regarding their inventory, selection, and pricing — and Amazon offers the merchandising tools for brands to create and personalize content in each of their unique brand voices,” the person said.

The spokesperson also pointed to Amazon’s ability to “seamlessly tie content and commerce together. Both fashion and beauty brands can engage and entertain customers through immersive storytelling, including enhanced, auto-play imagery and in-motion graphics. It’s Day One for us, and we look forward to listening and learning from customer feedback so we can continue growing and enhancing Luxury Stores.”