Micaela le Divelec Lemmi believes the launch of the new web site is especially significant at this time of isolation caused by the coronavirus pandemic.

MILAN — In just a quick mouse swipe on the new Ferragamo.com site, viewers will move seamlessly from a sketch of the patented 1947 “invisible” wedge-heeled sandal to that of Gen Z actor and Instagram celebrity Hero Fiennes-Tiffin, who fronts the brand’s new men’s fragrance campaign. From a black-and-white image of a smiling Marilyn Monroe, who owned countless Salvatore Ferragamo shoes, the eyes wander to a group of young Millennials — Cuba Tornado, tech entrepreneur Sinead Bovell, model Bonnie Chen and actress Gillian Zinser photographed by Francesco Carrozzini for the “Rising in Hollywood” campaign. From the vintage photos of founder Salvatore Ferragamo and his wife Wanda and the frescoed 13th-century Palazzo Spini Feroni, which they turned into the company’s headquarters starting in 1938, on to the sustainability initiatives, the site, which will officially launch today, blends past history — without nostalgia — and current activities and offers a comprehensive selection of Ferragamo products.

The fact that the web site is launching during the coronavirus pandemic is especially significant, chief executive officer Micaela le Divelec Lemmi told WWD exclusively in a phone interview from her home in Florence.

“Digital technologies are now more than ever a way to communicate, entertain and sell. An entirely new design and a more effective, intuitive user experience and immersive, high-definition imagery offer a message of hope for the future, as our online boutique is intertwined with the history of the brand’s values, in a truly omnichannel experience,” said le Divelec Lemmi. “Never has there been a moment more fitting for this launch and to express our brand’s history, values and innovative streak as we strengthen our interaction and exchanges with our customers.”

Customer service has been enhanced, and shoppers may now purchase items over the phone as well by contacting a customer care sales agent.

The launch is part of the Florence-based company’s recent increased drive into technology and social media.

As reported, just as the COVID-19 began hitting Italy in February, and in order to limit the potential impact of Chinese buyers not being able to travel to Milan and Florence, Ferragamo developed a business solution with digital content company Hyphen creating a digital virtual showroom for the brand. “In the emergency, we made a quick decision for all our buyers and we were fully satisfied with the results,” said le Divelec Lemmi.

To entertain its community during the self-isolation period, Ferragamo launched the Trivia digital project on its Instagram Stories inviting users to rediscover and test their knowledge of the brand’s history and key products via anecdotes and quizzes. The company has seen the regular participation of around 10 percent of its 5 million followers on each episode. “This is also a moment that marked a change for us, engaging in a playful way with our followers,” said le Divelec Lemmi.

“We want to create a strong link between the digital and the real world,” said the executive.

She noted that the new site is also an expression of a new vision for Ferragamo, which has not renewed its store concept since her appointment to the ceo post in the summer of 2018. Paul Andrew joined Ferragamo in September 2016 as women’s footwear director and was promoted a year later to women’s creative director. He was promoted to the role of creative director in February 2019. Guillaume Meilland maintains his role as men’s ready-to-wear design director.

Le Divelec Lemmi set up a digital innovation team in the second half of 2019 to develop the brand’s e-commerce and other initiatives. She underscored that the previous version of the site was “launched in a different historical phase of the brand.” The new site will be first rolled out in Europe and the U.S., Asia will follow immediately after, first in Japan then in China and the rest of the region. 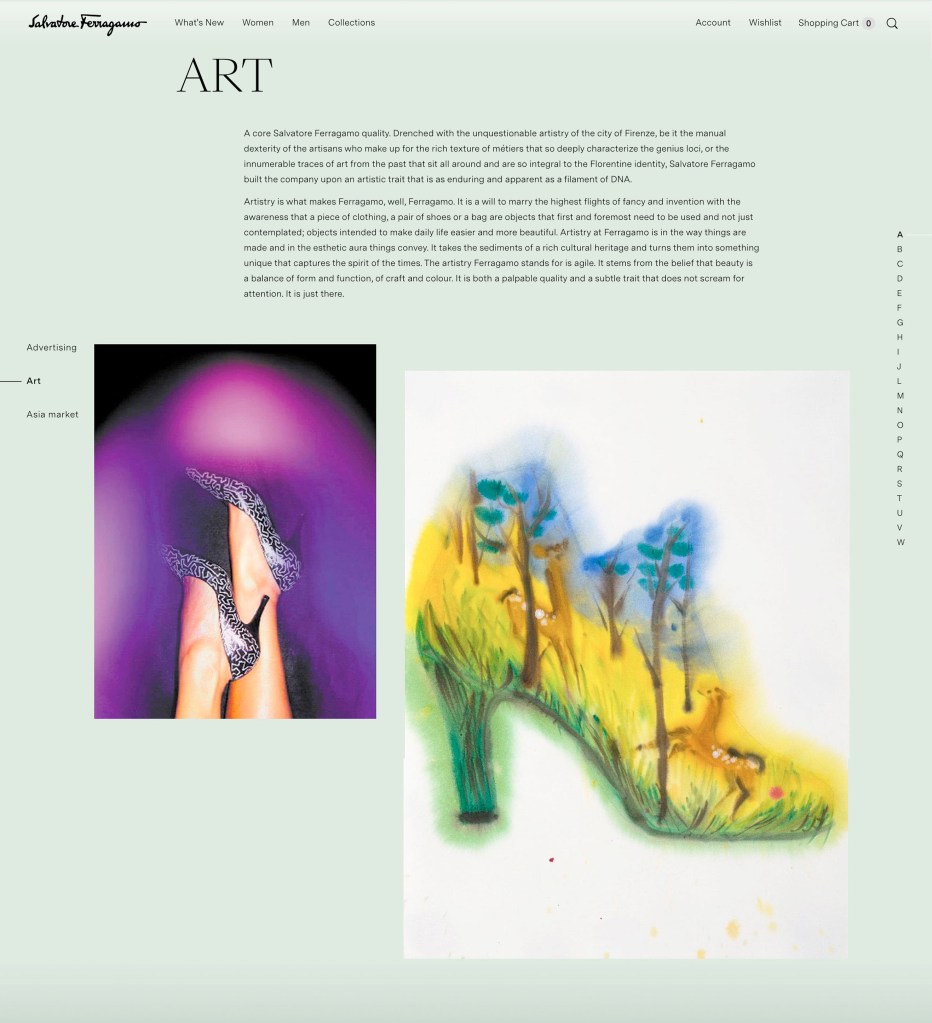 A screenshot from the new web site.  courtesy image

Le Divelec Lemmi characterized the site as “a powerful means” to transmit messages while learning about the company’s customers. “We’ve seen the same trend in all countries, with a slowdown in traffic during the first days of the lockdown, followed by progressive improvements at different times, starting from China, and a return of traffic with more time and attention dedicated to the site, proving that people do miss the shopping experience.”

While the company does not reveal how much the online channel accounts for in terms of sales, le Divelec Lemmi said footwear remains the strongest category online, and that “belts is also an interesting business.” Ferragamo’s e-commerce will also help balance the travel retail division, which has been disrupted by the pandemic, although the executive expressed confidence in a recovery in the medium term.

Italy’s lockdown is expected to be lifted on May 4, although activities are said to restart gradually in different phases. Last week the company reopened its prototypes and sample-making offices and gradually will reopen its complex in Osmannoro, outside Florence. “We are well below the 10 percent limit of employees” allowed in and Ferragamo is supporting shifts and smart-working.

The goal is to present the brand’s pre-spring collection digitally in June, with “possibly those closer in Europe visiting the showroom,” and the men’s collection in September as well as the women’s line. She emphasized the fluidity of the situation, however. “We’ll see how things evolve. A month ago, nobody would have thought of any kind of reopening. The winning strategy is to be flexible, since there are so many different scenarios.”

Le Divelec Lemmi also sees more focused and reduced collections with injections of “updates to help attract customers with a flow of novelty.”

Ferragamo has reopened its Vienna store, with reduced hours, and its Frankfurt banner. Stores in China have been opened for a few weeks, and the company has seen a progressive return of traffic week after week. “There are encouraging signs from Asia, although perhaps not at the speed we would have expected, as some stores are still closed, such as in Malaysia or Singapore, and that was unforeseen,” she said.

As reported, the company registered a 30.6 percent drop in preliminary revenues in the first quarter. In the three months ended March 31, sales dropped to 220 million euros, compared with 347 million euros in the same period last year.

To help fight COVID-19, Ferragamo has created and donated 100,000 antibacterial face masks and also provided Tuscan health-care institutions with 50,000 hand sanitizers and 3,000 respirator masks. It has teamed with the Italian Red Cross to finance the renovation of two wards of Florence’s I Fraticini hospital, which was shut in 1996 and which hosts patients who are recovering from the coronavirus or who need to be in quarantine. 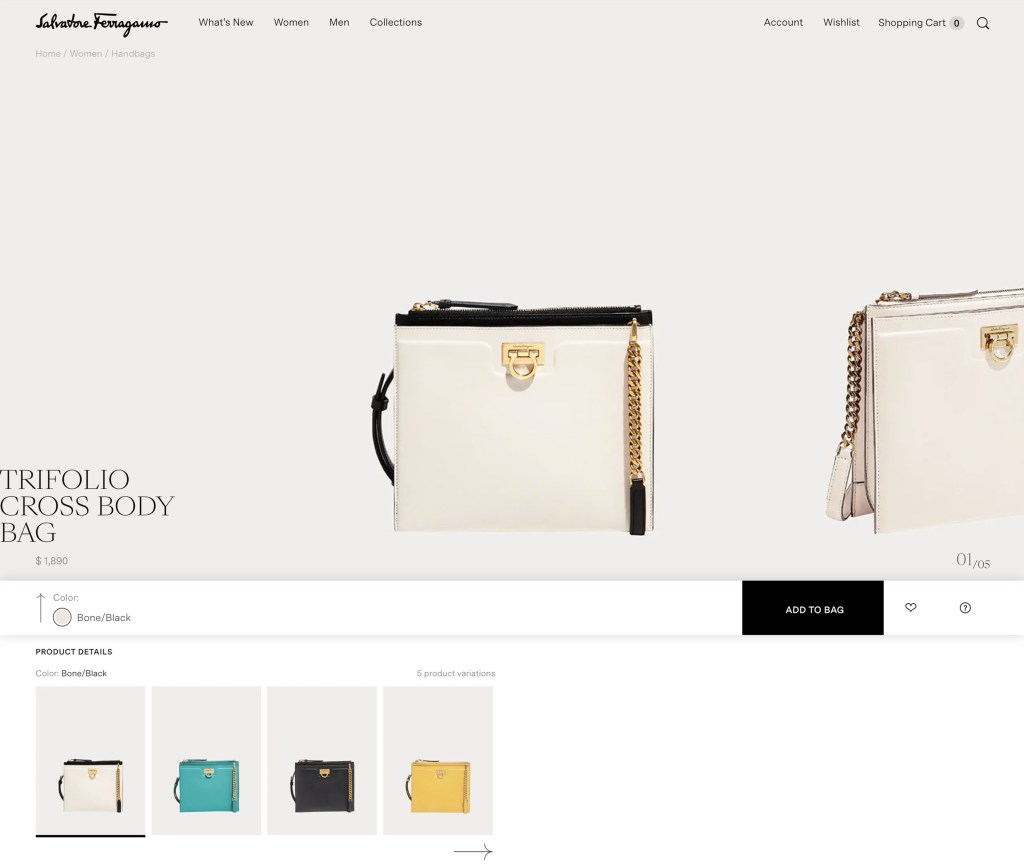 The Trifolio bag on the site.  courtesy image