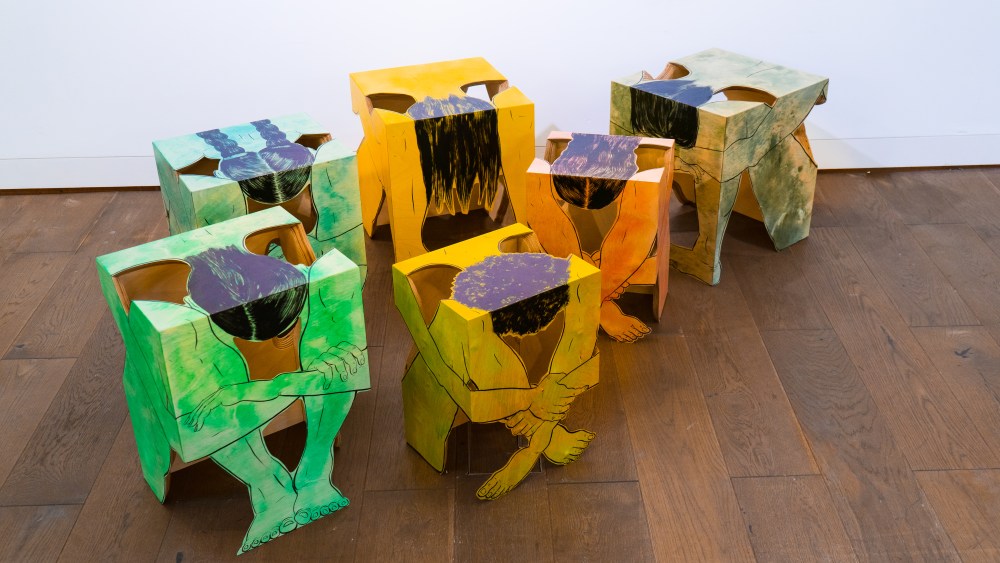 LONDON — The creative band at Sarabande is headed to Hong Kong next month for an installation and pop-up shop at Joyce that will house works of art and sculpture, a jewelry engraving workshop and a clothing offer from hot London brands including Craig Green and Roberts Wood.

This will be the first time that Sarabande, the late Lee Alexander McQueen’s charitable arts foundation based in northeast London, takes its talents on the road, and into new markets.

The pop-up will run from May 17 until June 12 at Joyce on Queen’s Road Central, with some of the designers and artists remaining on site for a week to meet customers, retailers, local talents and craftspeople.

Trino Verkade, the founding trustee of Sarabande who runs the foundation, said she is most excited about demonstrating how the creative disciplines at the foundation are interlinked, how artists and designers can inspire and support one another, and the bonds between imagination and craftsmanship.

“It’s about the Sarabande mind-set as well as the final work,” said Verkade, who worked with Andrew Keith, president of Lane Crawford and Joyce at The Lane Crawford Group, on the project.

As part of the Hong Kong visit, Verkade will also be taking the group of Sarabande creatives to see the artisan jeweler Wallace Chan in his studio, and on visits to other experts including a neon artist and a tattoo expert.

Verkade and the Sarabande group will also be taking part in consumer-facing talks including a Joyce Creative Salon discussion on May 16 before the pop-up opens.

There is also a chance for customers from the Joyce art galleries and students at local art colleges to watch the artists and jewelers work and to hear from the Sarabande alumni about their creative process, camaraderie and the work of the foundation.

In an interview, Verkade stressed that Sarabande values the flow and cross-pollination of creativity. “Craig studied as a sculptor before he became a designer, and Katie Roberts-Wood trained in medicine before she went into fashion,” Verkade said.

Named after the late Lee McQueen’s 2007 spring collection, the foundation provides scholarships to students at graduate and postgraduate level and houses studios at its headquarters in London’s Haggerston for designers, artists and jewelers.

The foundation said it has helped more than 70 artists and designers through scholarship, mentorship and subsidized studio space, and also offers a rolling program of related events, talks and exhibitions. Craig Green is a Sarabande alumnus, as is John Alexander Skelton and Katie Roberts-Wood of Roberts Wood. All three worked from the small and sunny studio spaces at Sarabande before making room for the next crop of creators.

During the Joyce in-store takeover, Sarabande artists will paint, sculpt and mold original artworks that will be put together to form an installation called Not a Family Tree|The Anomalies. There will also be live window and front-of-shop installations, with the artist and designer Joshua Beaty using locally sourced objets trouvés to fill the theatrical vitrine of the flagship store.

The sculptor Jasmin Reif, who works under the name Judas Companion, will install dozens of masks across the walls of the front entrance stairwell, while the artist Saelia Aparicio will live-paint murals over the course of three days. They will cover the lobby walls and customers will be able to buy them.

Aparicio will also be creating a series of wooden stacking stools for Joyce before she boards a flight back to London for a group show at the Serpentine. Jewelry artist Castro Smith will custom-engrave pieces for customers, by appointment, at his in-store workbench and will also create pieces on commission.

Milliner Leo Carlton’s 3-D-printed hats will also go on display at Joyce, to coincide with an exhibition that’s taking place now at Sarabande.

A Sarabande alumnus, Carlton has been using Oculus Rift virtual reality to design hats, and then 3-D printing them from compostable material. His designs can be sent anywhere in the world as a file, and printed by anyone.

The PLA, or polylactic acid, material is made from fermented plant starches and is readily available. The hats are water-resistant and will biodegrade in a compost heap when they’re no longer wanted.

Although the Joyce x Sarabande Foundation pop-up store won’t be selling the hats, it will be selling a range of Joshua Beaty brooches, men’s wear from Craig Green, Danshan and John Alexander Skelton, and women’s wear from Roberts Wood. Jewelry by Castro Smith, Charlotte Garnet and Emily F Barrett will also be available for purchase.

Verkade said she’d love to do more trips like these in other locations and believes it’s win-win for everyone: The artists get exposure and can sell, while the world gets to know about the fizzing creativity that goes on at Sarabande and stores such as Joyce get a shot of fresh talent and ideas.

“Retail has to be so much more exciting today, and watching these people create — with no commercial constraints — becomes an emotive experience for the viewer,” she said.