Even with a new hotel deal, Philippe Starck is as 'cuckoo' as ever. 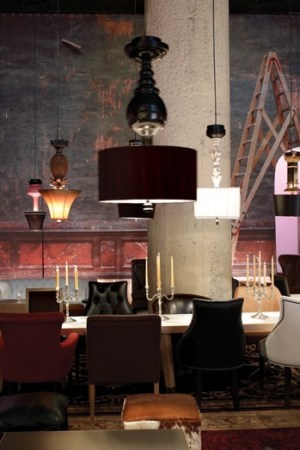 Even with a new hotel deal, Philippe Starck is as ‘cuckoo’ as ever.

At nearly 60 years old, bad-boy designer Philippe Starck is finally growing up…sort of. The exuberantly imaginative Frenchman—who has ricocheted from designing hotels from Manhattan’s Hudson to Hong Kong’s Jia to Rio’s Fasano—is settling down with a 15-year deal designing hotels, restaurants and nightclubs exclusively for Los Angeles–based nightlife and real estate impresario Sam Nazarian’s company, SBE. Their first project, the 297-room SLS at Beverly Hills, will open in the fall, followed by the Ritz Plaza in Miami next year and the redesigned Sahara Hotel and Casino in Las Vegas in 2011.

Of course, this isn’t Starck’s first time livening up hotels. He first burst onto that scene designing Ian Schrager’s original Royalton in New York in 1988. His grand statements at other Schrager establishments, such as the Delano in Miami, the Sanderson in London and the Mondrian in Los Angeles, were widely imitated, albeit in diluted form, by the larger chains.

“I need to make a new revolution,” says Starck in his heavily accented English from Las Vegas, where he is meeting to review plans with Nazarian and creative director Theresa Fatino. “Twenty-five years ago, we invented what they call the ‘boutique hotel.’ It was a huge success and everybody copied it. But for me, just to make the hundredth copy of the concept that I invented 25 years ago, I prefer a good sleep.”

Though he is still prone to gimmicks like mounting rows of unicorn heads on the walls, as he did at the Hotel Faena in Buenos Aires, Argentina, a few years ago, the new Starck professes to be more serious. “I try to be intelligent,” he says, though he admits, “I’m still French. I’m still cuckoo. It will always have a twist. I myself am twisted.”

At the SLS at Beverly Hills (which is housed on the former Le Meridien property), visitors will find relatively quiet, classic design—but never fear, Starck still has a little fun at Nazarian’s nearby S Bar, hanging lamps upside down from the ceiling. “We make hotels, nightclubs and restaurants, just to give pleasure,” points out Starck. “And if you want to give pleasure, you need to have pleasure during the process.”

Indeed, he seems happy with his new partner, who envisions the budding hotel chain as a high-design rival to the Four Seasons.

“It took me a year to get Starck on the phone,” says Nazarian, who eventually signed on the designer for his Los Angeles sushi restaurant, Katsuya, before their relationship blossomed into the exclusive contract they now share. (SBE has tied up Starck globally until 2011, and until 2020 in North America, the Caribbean and Mexico, though he can still satisfy his creative urges by designing myriad products from megayachts to bathroom fixtures for other clients.) “What we have done is allow him to dream,” Nazarian says of Starck. “He has a lot of ideas he never had a chance to implement.”

Meanwhile, the two men, known for their outspoken personalities, seem to be getting along well. “Sam is my brother, my soul mate. We never speak about business,” claims Starck. “We don’t discuss if the minimalist trend is better than Baroque or if gray is better than pink. We speak about vision, creativity, respect, poetry, intelligence and elegance.”

The two also see eye-to-eye on incorporating current eco and health trends into their projects.

“We shall not put stupid amenities like some candies, and fill the room so that people eat sugar and become fat,” insists Starck, who will also outfit the rooms with organic bath products and linens.

They will also give guests a chance to reclaim their manners. “I remember the Delano in Miami—people were stealing everything. They were even stealing the sinks,” he recalls. This time around, choice pieces of Starck’s furniture will be available for purchase through Italian manufacturer Cassina. Another bonus will be prioritized access to Nazarian’s popular clubs and restaurants, such as Foxtail, Hyde and Area.

But such cross-promotion—as well as the fact that corporate entity Starwood, the umbrella company that includes the Sheraton, Westin, W and St. Regis hotels, is the managing partner for the day-to-day operations of the SLS at Beverly Hills under its Luxury Collection brand—leads to some skepticism. “The cool kid in the class gets the backing that allows him to have a bigger audience, and the corporate side of things gets the aura of the cool kid being on their team, but I worry what the guest gets out of the relationship,” says Melissa Biggs Bradley, the founder of Indagare.com, a member-based luxury travel Web site. “In a way, it looks like the hotel version of Starck’s Target deal.”

“We are not doing it for money,” insists Starck. “We are here really to find solution to help our tribe to have a better life.”

For such a prodigious personality, the designer lives in a remarkably simple way when he is not flying around the globe in his private jet. In between bursts of intense work, he retreats to his oyster farm near Bordeaux, France, with his fourth wife, Jasmine. There, the couple lives a monastic existence relying solely on solar energy and rainwater.

“I have a sickness of creativity,” says Starck. “But I am not somebody who puts his name on any s–t designed by anybody. If I become bad, or if I see that somebody can do it better than me, I will stop immediately. But today everybody still looks happy with what I do. Why should I stop?”