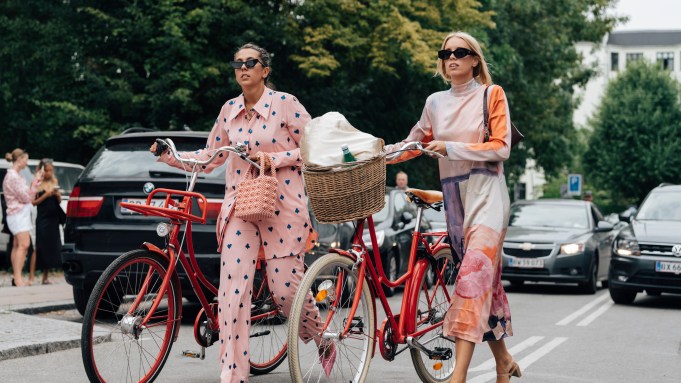 COPENHAGEN — Copenhagen Fashion Week was anything but minimalist, with showgoers donning Puka shells — on necklaces, bracelets, anklets and belts — as a complement to their colorful, printed dresses. Handheld fans and flip-flops became the unofficial symbol of the three-day showcase as many tried to combat the heat that draped itself over the city.

Tailored jackets and Stan Smiths are a thing of the past, and Scandinavian street style is upping its game. Brands have been pushing their boundaries, too, taking a fresh and experimental approach to spring collections, unveiled during the three-day showcase and at the accompanying trade shows Copenhagen International Fashion Fair, or CIFF, and Revolver.

“We’ve seen a shift in the minimalism trend, which is moving more and more towards maximalism in the market. From bright colors and prints, Scandinavian style still channels these ‘out there’ trends in an incredibly chic and understated way,” said Tiffany Hsu, fashion buying director of MyTheresa.com, which picked up Danish label Baum und Pferdgarten for next season.

“Danish fashion is young and catering to the advanced contemporary market. They are truly pioneers of bringing new talent to the wider industry and keeping trends fresh and relevant,” Hsu added. “We’ve seen a huge shift in its presence and it’s a real focus for editors and retailers alike outside of fashion month.”

Lisa Aiken, fashion retail director of Net-a-porter, said Copenhagen Fashion Week has become more and more internationally recognized. “This year I spotted a number of editors who had flown in for it, compared to previous seasons. They have led the way when it comes to the best fringe fashion week format and, as a result, it is becoming increasingly popular,” she said.

“We definitely see a growing demand for Danish fashion. In 10 years we have seen the export of Danish clothing rise 40 percent, and we see the export rising year by year. Last year there was a 6 percent rise and we do not see any indications of this changing,” said Simon Hansen, press and communications manager of Dansk Fashion and Textile, the trade association for Danish textile and clothing companies.

According to Mathilde Torp Mader, By Malene Birger’s new creative director, the momentum began to build two years ago with the Danish label Ganni: “It really exploded and it put a lot of Danish brands under the spotlight.” International brands are tapping into the city’s buzz, too, with Paul Smith opening the doors to his first Copenhagen flagship on Thursday in the downtown København K district.

Lindeberg’s new creative director Jens Werner, who set out a new vision for the brand with skate-inspired looks juxtaposed with smart men’s tailoring and long structured coats, said the buzz in Copenhagen has been building.

“Since our last show in January, our high-end international wholesale accounts were more interested in supporting us. We had more than double the number of guests for the [spring 2019] show, with more international press, buyers and influencers,” said Werner.

There was a sense of liberation and renewal at Torp Mader’s official debut collection. She now spends half of her time in London, and her collection reflected that with her retro brown and yellow color palette and Seventies-inspired designs. A billowing yellow mesh dress was a highlight.

Brands in general made strong statements, with everything from their color palettes to their show venues, making use of Copenhagen’s array of empty warehouses and train stations. These made for great backdrops for the fluorescent oranges, sequins and loud prints on the runways.

Since starting her namesake label four years ago, Cecilie Bahnsen’s name has been on the tips of many a tongue: Known for her fanciful and dreamlike designs, she introduced color to her usual black-and-white aesthetic this season, with looks including an open-back and roomy floral print dress in yellow and blue.

“It’s been a good challenge for me to try and push color. We — and Danish design — are both known for our simplicity but lately, brands have been daring to be more playful, making Danish fashion much more interesting,” Bahnsen said.

The audience also took notice. “She really moved her vision forward while staying true to her signature aesthetic, which was great to see,” said Aiken.

Ganni also turned over a new leaf: Instead of sending its signature floral-print dresses down the runway, the brand collaborated with 66 North, a technical outerwear brand, and produced a chic-yet-utilitarian offering that included a tie-dye vest and short set, and leopard-print pieces sprinkled among the khaki parkas and bucket hats.

The brand also held its biggest show to date with more than 400 guests. “The calibre of attendance was really high, and it’s evident that CFW is becoming a magnet for all buyers and press,” asserted Nicolaj Reffstrup, chief executive officer of Ganni. The brand, whose creative director is Ditte Reffstrup, also has more money behind it, having sold a majority stake to L Catterton in December. Earlier this year, Ganni set up headquarters in London, signaling increasing European and international interest.

Hsu of MyTheresa.com said Ganni’s collaboration with 66 North was key to “the emerging trend of camping and hiking, and will set the tone for the rest of the season. It was a standout show and they always offer key, cult pieces that are statement, yet very wearable.”

Ganni also launched a kiosk pop-up, which housed locally sourced products, branded ready-to-wear, and a selection of upcycled sustainable pieces during the showcase.

Bahnsen transformed her runway into an exhibition space postshow. Titled “A 24 Hour Dream,” the exhibition invited guests to explore Bahnsen’s past, present and future vision and encouraged them to interact with pieces that had just been shown on the runway.

“Our biggest market is Japan, we have a lot of interest from there and from the U.S. Even though this is our base, we’ve become very international very quickly and I think we’ve been very lucky,” Bahnsen said.

In 2017, the brand surpassed 7 million euros in revenue and by the first quarter of 2018, Holzweiler said revenue had doubled to an estimated 14 million euros.

While these young but more established Danish labels are coming into their own, emerging labels are garnering just as much attention.

New label Aéryne, known for feminine, floral-printed pieces, said big retailers are circling. “There’s been a lot more international interest compared even to last season,” said Siri Vikman, founder and ceo of Aéryne. “We just met with Net-a-porter earlier this morning, which is superexciting for us.”

She said being at Revolver, one of the shows that takes place during the fashion week, “has been great, the location is amazing as it’s in the city center and much easier to get to. Therefore we’ve seen more traffic coming through,” she said.

Trade fairs have long been a Copenhagen Fashion Week staple, as well as agenda-setting platforms. Revolver, which houses younger labels such as Freya Dalsjø, Bjørg Jewellery and Mykke Hofmann, runs alongside CIFF, one of Europe’s largest trade shows.

Naomi Campbell made a special appearance at CIFF this year to unveil the Enlightenment project, in collaboration with Nick Knight from Show Studios and Stavros Karelis from Machine-A.

Each created unique pieces to raise money for the Little Sun Foundation, a nonprofit organization promoting affordable solar energy. Abloh has created a limited-edition product, while Campbell’s favorite inspiration quote has been painted on blankets. A short film by Knight was screened at the trade show.

Over the past few years, CIFF has worked hard to shed the conventional trade fair reputation and jazz up its image, providing opportunities for emerging talent. This year it attracted international attention with partnerships and projects with buzzy talent from the likes of Gosha Rubchinskiy to Virgil Abloh.

“I think for the last three years, CIFF has been a major platform to Copenhagen, they’ve brought this international vibe over to Copenhagen and all the buyers and press I’ve spoken to say that there’s no fashion fair in the world as relevant as CIFF,” said Holzweiler.

“They’ve really given Copenhagen another perspective and made it easier for brands to find the right buyers. They section the brands into segments so it’s easier for buyers and it’s really well curated, which I think has been the biggest change in Copenhagen,” he said.

CIFF’s Raven section, situated near the entrance of the fair, was a large draw. Edgy and avant-garde labels were given ample space, and before midday on Wednesday — early on in the fair — labels were already drawing prospective international interest. “I just had a buyer from Lane Crawford speak with me,” said Camilla Damkjaer, whose collection is stocked at Machine-A.

Aiken of Net said Danish fashion has become a leader in contemporary design, “and they’re also setting trends that bubble up from the street and enter the international stage.”