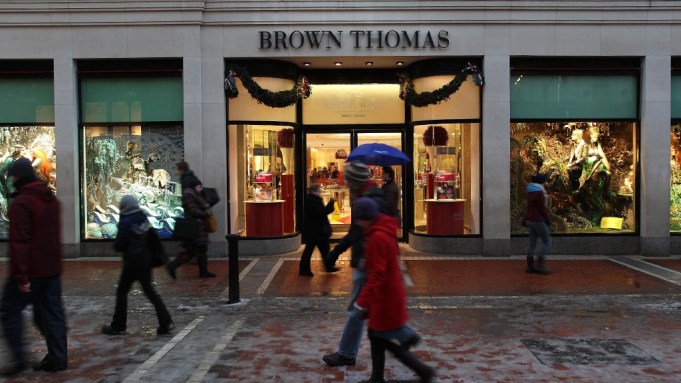 The Selfridges Group is owned by British-born Canadian billionaire W. Galen Weston, and his wife, Hilary, and holds in its portfolio four luxury department store groups: British chain Selfridges, Brown Thomas in Ireland, Holt Renfrew in Canada and De Bijenkorf in the Netherlands, as well as Ogilvy in Montreal.

W. Galen is the grandson of George Weston, a Canadian baker who built Canada’s biggest bakery business. Upon his death, his son, W. Garfield Weston, took up the reins of George Weston Ltd. and began a program of expansion and acquisition. In the Thirties, during the Depression, Garfield secured funding to expand into the U.K. and was soon reporting sales equal to the Canadian parent company. Within a few years, Garfield had acquired a string of British bakeries, trading under the Allied Bakeries banner, and he moved his family to England in 1935.

Meanwhile, the U.S. operations were growing stronger. Garfield remained in Britain during World War II, even sitting as a member of Parliament for a time.

W. Galen Weston was born in 1940 and moved with his parents back to Canada in 1945. He watched as his father’s business expanded globally, acquiring subsidiaries from Rhodesia to Australia, and worked in many of them. In 1961, at the age of 21 and after studying business administration at the University of Western Ontario, W. Galen moved to Ireland and set up a grocery store, Powers, with his own money — his father had put him to work at a young age.

In Ireland, W. Galen saw a major opportunity for growth and his instinct was right: by 1965, Powers had expanded into a six-store grocery chain. He went on to acquire a discount chain, Penneys, and a grocery competitor. He purchased an interest in department store Brown Thomas in 1971, eventually acquiring full ownership in 1984. He married Hilary Frayne, an Irish fashion model, in 1966 and together they have built the retail Weston empire.

The Weston family controls about 200 companies, including Canada’s largest supermarket chain, Loblaws, and President’s Choice brands, a variety of grocery and household products, and services, and the Joe Fresh contemporary fashion brand.

Here’s a look at Selfridges Group’s other fashion retail properties.

The original and first Brown Thomas store was opened on Grafton Street in Dublin by haberdashers and general drapers Hugh Brown and James Thomas in 1859. The company was bought by Selfridges founder Harry Gordon Selfridge in 1919 and it operated as a branch of Selfridge Provincial Stores until 1933, when it was sold to John McGuire, who had made his name at Cerys — another Dublin department store. The company was listed on the Irish Stock Exchange in the Sixties, Weston bought his first share in the company in 1971 and he bought it out in 1983. In 1991, the company bought out the Switzer Group, which included stores in Cork, Galway, Limerick and Dublin. In 1994, Brown Thomas sold its original store to Marks & Spencer and took over what was the M&S store on Grafton Street.

In 1998, the company opened the first BT2 boutique, which stocks contemporary and diffusion brands including COS, Etoile by Isabel Marant and Sandro. The shop became  home to Ireland’s largest denim bar. There are now three BT2 stores in Dublin.

By 2000, all of the previous Switzer Group stores were rebranded as Brown Thomas. Since 2005, all four of the stores have been refurbished and stock luxury and designer brands including women’s wear from Celine, Stella McCartney, Mary Katrantzou and Christian Louboutin, as well as men’s wear, beauty and home goods.

Situated on Oxford Street, the London megalith that is Selfridges was founded by Henry — Harry to his friends — Gordon Selfridge, son of a small-town storekeeper. He worked his way up through the ranks of Chicago retailer Marshall Field & Co., innovating by lighting the store at night and opening a restaurant where ladies could lunch unchaperoned. Selfridge is also credited with coining the phrase, “The customer is always right.”

He came into a lot of money when he married into the Buckingham family and in 1906 he traveled to London with his wife, Rosalie. He was wholly unimpressed with the city’s shopping scene, so he invested 400,000 pounds (which is equivalent to $64 million, current U.S.) and built Selfridges at the less fashionable end of Oxford Street in 1909. Selfridge’s innovative approach to retailing saw him put planes and controversial tango dancers on display, making shopping entertaining. He was the first to establish a beauty department on the ground floor — cleverly masking the smell of manure from horse-drawn carriages — and he opened a pet shop and what was at the time the world’s biggest bookshop.

He ran the store until he retired in 1940, when he took on the role of president. He died in 1947 and four years later, the business was sold to Lewis’ of Liverpool for 3.4 million pounds (equal to about $153 million, current U.S.).

Radice installed the atrium escalators and made the iconic yellow bags covetable items in their own right.

In 1998, Selfridges was demerged from the Sears Group and floated on the London Stock Exchange. Stores opened in Trafford Park, Manchester, in 1998, followed by the Manchester Exchange Square store in 2002. In 2003, the  Birmingham store opened.

Shortly after the opening of the Birmingham store, Selfridges was acquired for 600 million pounds ($966 million, current U.S.) by the Westons, who put a stop on expansion plans, choosing to focus instead on developing their existing stores.

Galen Weston’s daughter, Alannah, was appointed creative director in 2004 and on her watch, the store opened what was at the time the world’s largest men’s and women’s shoe departments, and launched the new Women’s Designer Galleries and a dedicated men’s designer space. She also presided over the opening of Wonder Room, a nearly 20,000-square-foot space selling luxury jewelry, watches and gifts, and Ultralounge, a permanent arts and exhibition space.

In 2012, Selfridges was voted World’s Best Department Store at the Global Summit of Department Stores for the second time and, in the year ended Jan. 31, 2012, operating profits rose 5 percent with more than 1 billion pounds ($1.6 billion) in sales.

Like the Selfridges Group’s other holdings, De Bijenkorf has a long history. It was founded by Simon Philip Goudsmit in 1870 and occupies a historic building on Dam Square in the heart of Amsterdam.

Spread over five floors, the store — and its 11 other branches — stock Dutch and international labels including Armani, Louis Vuitton, Burberry and Hermès, as well as beauty, accessories, home goods, toys and home entertainment offerings.

In November 2010, a deal announcing the purchase of Dutch department store chain De Bijenkorf was announced, marking the group’s first foray into mainland Europe. At the time, the Selfridges Group said total turnover for Selfridges, Holt Renfrew, Brown Thomas and the new Dutch acquisition would be about 2 billion pounds, or $3.2 billion at 2010 exchange rates.

The group also added that the Dutch acquisition was part of a strategy to own and operate premier luxury stores in select markets.

Founded in 1866, the La Maison Ogilvy specialty store in Montreal houses distinctive boutiques, many of the world’s top fashion designers, and upscale accessories and sophisticated gifts. In 2011, Selfridges bought Ogilvy for around $100 million. Besides its fashion offerings, Ogilvy is known for its 60-year tradition of a bagpiper playing for visitors at the store every day at lunchtime.