If you transported somebody from the 1800s to 1980, they’d notice how we shopped was essentially the same. We still went to markets … they were just inside. We still paid with cash … but sometimes we used check or credit, too.

Yet if you took that same person and brought them to 2018, they’d be bewildered by the way consumers buy things today.

Here’s why our pre-industrial time traveler would be okay in the 1980s: for thousands of years, shopping pretty much remained the same. If you wanted to buy something, you left where you lived and went to a market. When you got there, you bought whatever was being sold at that moment. If your favorite stall owner didn’t have that thing you like, you couldn’t buy it.

For nearly all of time, consumers could only acquire what the market owners made accessible to them. This was true as true in Mesopotamia as it was in late-century Kansas. Retailers controlled consumer behavior.

But then, almost overnight, the model was completely reversed. Suddenly, consumers had all the power. Retailers found themselves at the mercy of a consumer who could choose from products all over the world, buy from their homes, and get most anything delivered where and when they wanted. It must have seemed like the blink of an eye. Retailers lost control and become subservient to the demands of their consumers.

What happened? Simple: smartphones and the Internet. In the span of about five years, consumers made an enormous jump forward in available technology. Nowadays, we all walk around with a supercomputer in our pocket, giving us a global marketplace of products wherever and whenever we want to access it. In this, the retail market as we knew it vanished. It’s been replaced by something very different.

The change retail is experiencing is rooted in expectation. Before online became so available, retailers could offer terrible shopping experiences, but I had nowhere else to go. Now, I have a ton of options, none of which require I actually go anywhere at all. Given this shift, it’s natural to believe that physical retail is dying, that online will continue to dominate …

Except, that isn’t actually happening. Not only is physical retail not going away, it’s actually growing. How can this be? Easy. We’re still human beings. We’re social animals. We survive because we interact with each other. We want to touch and feel the things. We want to be around other humans.

We want to go shopping, but we just don’t want to be sold to. That’s a subtle but important difference. Our expectations of what retailers should provide are much higher now than ever before.

Physical retail is still the most important consumer touchpoint the industry has. But physical stores have to evolve to become less about selling products and more about engaging a consumer.

Look at malls. Everyone says malls are dead. Malls aren’t dead. Boring malls are dead. Some malls are amazing. They’re fun. They’re exciting. They have lots of cool stuff happening in them – oh, and apparently there are stores that sell stuff in there, too. The best malls are thriving because they put experience before revenue. They put customers ahead of retailers.

Individual retail stores must do the same. Why are Apple Stores busy all the time? Yes, they have amazing products, but Apple also built its stores to be an amazing experience for shoppers. Apple Stores are about discovery, about human interaction. They are designed to engage. Once you’re actually ready to buy something, an Apple associate scans your product, swipes your card right where you stand, and you’re done. Simple. Fun. 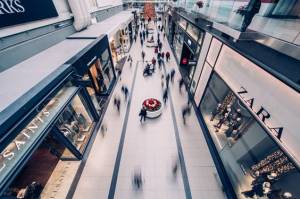 You can buy all the same products from Apple’s online store, but people still flock to their retail locations for the Apple experience – one designed not specifically to sell you things, but rather to be destinations. The stores are made to be full, so that when you walk by, you think, “What’s going on in there?”

The trend is rapidly growing. Retailers like Nike, Rebecca Minkoff, and Restoration Hardware are all redesigning stores to immerse customers in their brand, to engage them on an emotional level. Even more, major digital-first companies like Warby Parker, Fashion Nova, and Morphe are now opening physical retail stores to let customers interact with their brands in a more direct way.

Smart retailers have figured out that, to thrive in a world where consumers hold the power, they have to design their physical experience around what the customer wants – not, as it always was, what the retailer wants. If retailers build stores just to make money, they’re destined for the history books.

The retail apocalypse is great clickbait, but it’s just not true. Yes, retail has fundamentally changed. Consumers are in charge now, and retailers are having to rapidly redefine their business model to match heightened shopper expectations.

But this change represents a huge opportunity for retailers to give their target customers reason to come to their locations, to experience their brands, to build that loyalty with them again.

For consumers, there is no online or offline. There is just shopping.

Loren Padelford is vice president and general manager of Shopify.

In Price Fight Between Walmart and Amazon, Bentonville Wins