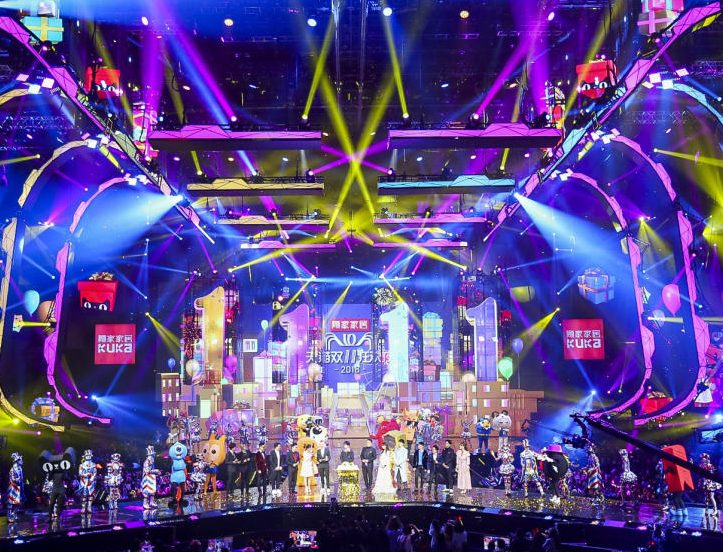 Alibaba’s total gross merchandise value for the 24-hour shopping festival this year totaled 168.2 billion renminbi, or $25.3 billion at current exchange. At 3:39 p.m. this year, total GMV exceeded the record set in 2017. By end of play on Sunday, the company’s total GMV hit 213.5 billion renminbi, or $30.8 billion, with more than 1 billion delivery orders.

By 6:29 a.m., the GMV of Tmall Global exceeded the platform’s total GMV of last year’s shopping festival, with more than 100 international brands registering GMV in excess of 10 million renminbi, or $1.4 million. Some of the first brands to hit this figure were Japanese beauty brand Ya-Man; Australian wellness brand Swisse, and with Australian pharmacist Chemist Warehouse. Tmall revealed its best-selling brands by category for Singles’ Day, with Lancôme, Olay and L’Oréal taking the top spots for beauty. GXG, Uniqlo and Peacebird were the top three men’s fashion brands, while Uniqlo, Only and Vero Moda were the leaders in women’s fashion. In terms of footwear, Skechers came out on top followed by Belle, then Hotwind. In the bags and luggage category, Samsonite was first, followed by Charles & Keith and American Tourister. For sports and outdoor brands, Nike was the winner, followed by Adidas and then Anta.

The 10th anniversary of the world’s biggest shopping festival was celebrated in typical Alibaba fashion — an extremely loud and immensely proud countdown gala in the hours leading up to the stroke of midnight on Nov. 11. Broadcast live on two Chinese satellite television channels and Alibaba’s online video hosting site, Youku, from the Shanghai Mercedes-Benz Arena, a host of local and international acts preformed, including Mariah Carey, Jay Chou, Cirque du Soleil and, surprisingly, Australian model Miranda Kerr, who tried singing in Mandarin.

But like so many of similar shopping events in the West — from the holiday sales season to Amazon Prime Day — Singles’ Day is no longer just one day. Alibaba began the pre-sales period this year on Oct. 20, with customers being able to view the sale prices of items and place them in their virtual shopping carts ahead of the big day. In the run-up to the festival, 33 brands on Tmall reported 100 million renminbi in pre-sales, with the overall pre-sales turnover of beauty-care products doubling from last year.

Twelve skin-care brands each reached more than 100 million renminbi, including Lancôme, Olay, Estée Lauder, SK-II, L’Oréal, Snow Show, Elizabeth Arden and Shiseido. A Burberry limited-edition wool scarf sold out on the first day of the pre-sale and New Balance sold more than 60,000 pairs of new arrival shoes on Tmall. MAC sold more than 17,000 lipsticks in just six minutes of pre-sale, and Lancôme sold 50,000 bottles of a skin-care product in five minutes. In total, 180,000 brands from China and around the world participated this year, along with 200,000 off-line smart stores, additionally 150,000 restaurants, malls and entertainment and leisure destinations offered Singles’ Day deals and discounts. It was the first year that the company pushed the event in earnest to its overseas business arms — Lazada in Southeast Asia and Daraz in South Asia.

Figures showed apparel featuring very heavily in the categories of products exported from China during the shopping festival. Midway through the sale day, Alibaba shared that the top 10 categories of exported products in descending order were dresses, wool coats, pants, hoodies, wool knitted sweaters, T-shirts, down jackets, low-top shoes and serums. According to figures from eMarketer, consumers in China will generate more than half of all worldwide e-commerce sales in 2018, with the country’s retail e-commerce sales predicted to increase by 34.3 percent this year to reach $1.53 trillion, representing 29.1 percent of total retail sales. Meanwhile, mobile commerce will increase by 38.3 percent in China this year, reaching $1.2 trillion.

Even against a backdrop of a GDP slowdown in China, the growth of Singles’ Day and from the June 18 shopping festival launched by one of Alibaba’s main competitors, JD.com, is generally taken for granted. So much so that growth has become somewhat of a non-event for China analysts. The trade war with the U.S. has admittedly led to uncertainty, but Singles’ Day is proving that Chinese consumers remain unperturbed when it comes to bagging the best deals.

“If we look at the macroeconomic conditions, I don’t think the average Chinese consumer is really going to have any [negative] sentiment. They might well be aware about tariffs and the U.S. They might have concern about it. But I would find it unlikely that it would trickle down into really making spending decisions around a big event like this,” said Bernhard Wessels, managing director at Kantar Retail North Asia in a phone interview ahead of the event.

“I think the growth of cross border e-commerce is potentially not read as closely, but we do know that that is growing quite strongly; it is probably 2 percent of e-commerce, so 2 percent of 19 [percent] of the retail industry. That will have a couple of impacts. One is its lower tax receipts as it doesn’t show up in GDP figures, and it will obviously impact the trade balance, although relatively small,” Wessels said.

From information gathered at 4 p.m. on sale day, the top 10 countries selling to China by GMV in descending order were Japan, the U.S., South Korea, Australia, Germany, the U. K., France, Spain, New Zealand and Italy.

Last year was the first time that “new retail” — now one of Alibaba’s core strategies — was integrated into the shopping festival, offering seamless online to off-line shopping experiences with smart stores and pop-up shops around the country. This year, the omichannel experience was even more prevalent. Tmall worked with Swire Properties, a leading luxury mall operator, to launch Tmall branded smart stores, pop-up stores and photo booths.

Although Alibaba has spent the past decade persuading shoppers to go online during the Singles’ Day festival, this move back to off-line retail might be confusing for some. Alibaba emphasizes that its ecosystem is not just a selling place, but also a place where brands are nurtured and developed. In this sense, Tmall offers a lot more benefits to its brands than a regular distributor, as it has direct access to consumers, which helps to inform strategy. Alibaba collects and leverages big data from both online and off-line touchpoints to help improve products and services and ultimately help brands reach their target audience.

“What we need to do is really work with our off-line [brand] customers to digitalise their off-line activity. So, at the end, their whole business, no matter if it is online or off-line, is able to digitalise,” said Yi Qian, deputy general manager of Tmall Global ,at a press briefing during the shopping festival.

“[Brands] have a much bigger pool to really study and understand what is their consumer feedback to their promotion activity and to their off-line promotion activity. By doing both, they have more actionable things they can do to provide a better experience to consumers. That is what we focus on right now with the off-line new retail,” Yi said.

In fact, the subject of Alibaba’s gathering of data from its users, especially during its busiest shopping day — Nov. 11 — has been divisive. It is not only physical sales, but also big data that plays a vital role in the continued success of Alibaba, its shopping festival, and its strategic partnerships with outside organizations.

Another way that Alibaba utilizes data gathered from big events like Singles’ Day is in its Tmall Innovation Center. Founded this year, the department incubates new products that are specially designed after examining big data analytics gathered by the company. The center works with brands on Tmall to design products specially tailored to the Chinese market and specific user groups within it. Duan Ling, head of Tmall Innovation Center, explained that the center only uses data insights from analyzing the market trends and information from Alibaba’s Research Institute, rather than gleaning information from individual consumer data. Developing lipstick colors specially targeted at Chinese consumers has been one of the biggest success stories of the new department, according to Duan.

Singles’ Day is a stress test for Alibaba’s infrastructure, including its payment systems, cloud and, most importantly, delivery network. The country’s logistic companies will be put to the biggest test of the year in the aftermath of the 24-hour sales period, with international shipments naturally being the greatest hurdle. In anticipation of an increase in cross-border commerce, Cainiao, Alibaba’s logistics company, chartered 51 flights to Western Europe, Russia and Southeast Asia, along with 1,000 shipping containers bound for Southeast Asia and other destinations by sea.

In the buildup to this year’s festival, Alibaba made a concerted effort to penetrate further into less-developed regions in the hinterland of China by creating special Singles’ Day promotions to target rural consumers. Many of these promotions involved targeting and converting off-line consumers.

By the end of last year, rural Internet users accounted for 27 percent of all Internet users in China, according to data from the China Internet Network Information Center. Considering that rural residents account for almost half of the country’s population, this market is underdeveloped. Alibaba used a mixture of traditional, online and new retail models to reach this user group, such as community mom-and-pop stores touting QR codes, which shoppers were encouraged to scan on mobile devices to enter online convenience stores with special deals, and scratch cards.

Although much has been made of the growing importance of rural shoppers and their increasing disposable income, it is clear that the urban, eastern dwellers still hold the biggest spending clout. By 9 a.m., the top three spending provinces, in descending order, were Guangdong, Zhejiang and Jiangsu, all wealthy, southeastern provinces populated by top-tier cities. The top three spending cities, in descending order, were Shanghai and Beijing, two of China’s most important first tier cities, followed by Alibaba’s wealthy hometown, Hangzhou.

Alibaba’s Nov. 11. shopping festival is now woven into the fabric of Chinese consumerism, with many other retailers also participating in discounts and deals during the 24-hour period. JD, one of Alibaba’s biggest competitors, revealed that during the first minute of Singles’ Day, sales of fashion goods on JD surpassed 100 billion renminbi, or $14.4 billion, and in the in first two hours of the festival, sales on Toplife, its new premium brands platform, increased 14-fold when compared with the same period during JD’s 6.18 shopping festival this June. Similarly, in the first two hours, sales volume for the Swiss watch brand Mido exceeded that of the whole day on June 18. Sales of male eye cream and eye essence on JD also increased by a factor of 10 year-over-year. The company recorded a total transaction volume for the Singles’ Day sales period of 159.8 billion renminbi, or $23 billion.