West Coast musicians are fond of drawing upon one another for inspiration, though Long-Beach native, Giveon, has a perspective that is entirely his own.

For Giveon, vocals are central, and inspirations are culled from the smoky, late-night lounges of the Rat Pack and Frank Sinatra as well as the distinct R&B edge found from contemporaries such as Frank Ocean and Miguel.

“There’s soul to it. There’s pop to it,” said Giveon of his signature style. “However, I want to speak on relatable things everybody thinks about, but nobody says — in a classy way. The goal is just to be Giveon.”

According to the singer/songwriter he had a sort of epiphany after hearing Sinatra for the first time. “It was the very first time I heard a baritone singer,” he said. “I got into Bobby Caldwell and Barry White from there. I realized my tone at this point.”

For the artist, creating music has always been a very personal process, looking to his own experiences to inform the music and lyrics. Drake also took notice of the singer’s vocals, featuring Giveon in his 2020 release of “Chicago Freestyle.”

“My writing process starts with the story of something I experienced, or a close friend experienced,” said Giveon. “After that the composition is made and the lyrics come last. I’m an artist, a self-starter, an entrepreneur, a creative, and most of all a thinker. I sit around and think a lot. That’s an inspiration as the songs reflect my thoughts.”

Giveon says that while fashion hasn’t sparked any inspiration for his music, it is something he considers when he is creating a new project. “Fashion means a lot to me because it helps me tell a story,” said Giveon. “For example, if I’m shooting for a project, the look I’m wearing lets you know what’s going on before anything else. I wouldn’t say fashion sparked any inspiration for the music. I would say it’s the other way around.” 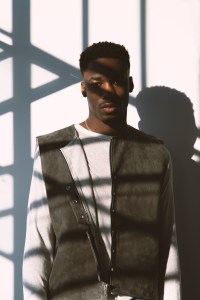 Giveon has over 50 million streams combined on Spotify.  Courtesy Image.

Still, fashion is definitely an area that the artist has his sights set on for his future.

“First, I want to establish myself as an artist,” said Giveon. “Second I want to expand into fashion. Fortunately for me an artist like Kanye West has already paved the way for someone like me to be taken seriously as an artist while being respected in the world of fashion.”