Stella McCartney Dishes the Dirt on Farming and Its Planetary Impact

The brand has published its first "eco-impact report" with new partner LVMH, and is strategizing for the future.

LONDON — Stella McCartney began quantifying her brand’s impact on the environment when it was still part of Kering Group, publishing an annual profit and loss sheet that measured the impact of her company’s sourcing practices, supply chain and manufacturing on the planet.

Now, with LVMH Moët Hennessy Louis Vuitton as its new minority partner, Stella McCartney isn’t letting up: On Monday, the company will release a report showing the fiscal impact of its business on the environment in 2019. The report highlights the damage that comes from extracting and processing raw materials, and underlines the importance of regenerating soil and farmland.

Stella McCartney’s negative impact on nature was valued at 8.21 million euros in 2019, a slight improvement on 2018, when it was 8.22 million euros. In 2017 that number was 7.38 million euros, but the company said it was difficult to make direct comparisons with that year as its methodology, scope and ways of looking at data have changed.

To get to the final number each year, the company models the impact of such things as land use and environmental pollutants on the planet and on human well-being, then pins a monetary value on its findings.

In the report, McCartney said lockdown has made her more committed than ever to quantifying her company’s impact on the environment, and to focusing on positive actions, rather than simply controlling the damage caused by sourcing and the supply chain.

“Now more than ever we need to slow down and be more mindful, while simultaneously accelerating our push toward circularity and regenerative, nature-based solutions — remaining focused on having a positive environmental and social impact and making every action count,” she said. “While we still have a long way to go, I have never felt more hopeful [about what] we can achieve, but we need to do this collectively.”

The report pointed to the destructive impact of farming, logging and mining in particular, and said the company is looking for ways to remedy the damage.

It argued that two-thirds of the planet’s terrestrial and aquatic ecosystems “are now significantly degraded due to human activity such as agriculture, mining, logging and fishing.” 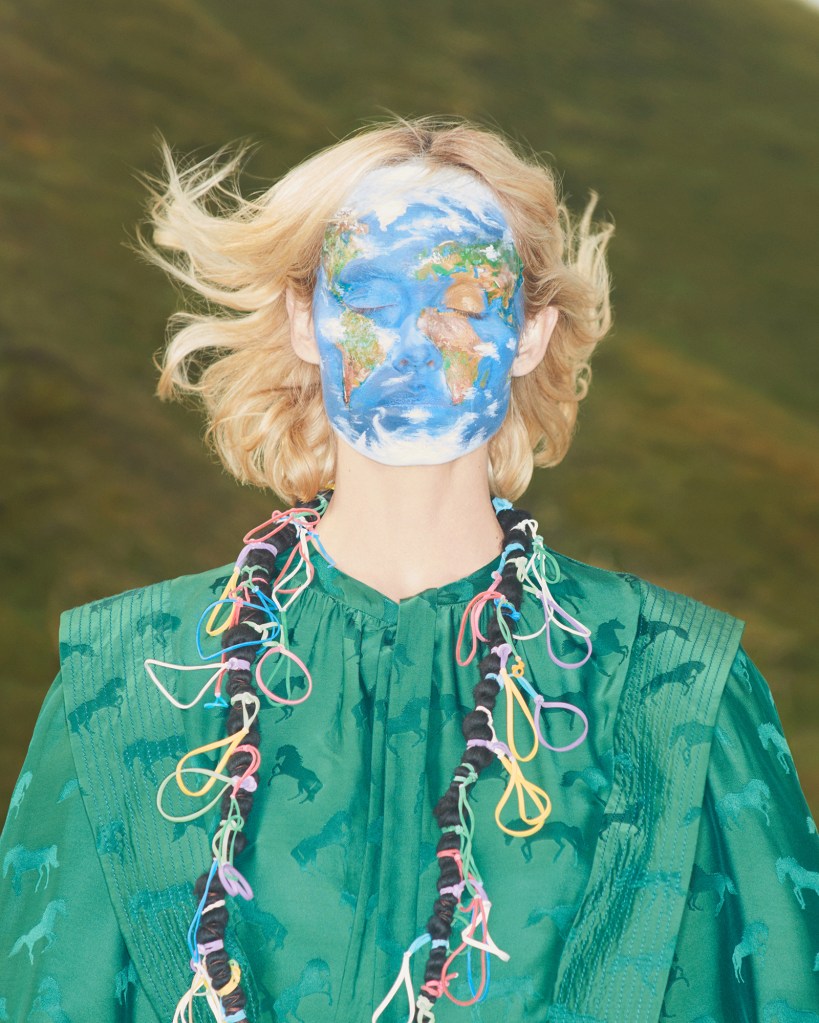 It said although “there are still a few areas of semi-pristine nature, almost all have been modified by people in some way. Knowing this, it is not surprising that land use impacts make up 38 percent of [the company’s] total environmental impact — the biggest of all our environmental impact categories.”

The report argued that fashion supply chains generally “occupy huge areas of land, ranging from farms, forests and mines where fibers or resources are extracted, to the footprint of the buildings that house manufacturing processes to retail operations. When land is used to grow fibers, raise animals or extract metals or oil, there tends to be a loss of ecosystem services, biodiversity and degradation of soil health, especially if it was converted, or is not managed properly.”

Regarding greenhouse gas emissions, Stella McCartney’s company emitted about 27,210 tons of carbon in 2019, which equated to a “cost to society” of 2.2 million euros. The report said that figure falls within the Greenhouse Gas Protocol’s recommended range.

Given that it has greenhouse gas emissions under control, Stella McCartney said it believes the biggest opportunity for greenhouse gas reduction now lies outside of its direct operations, and on “emission hot spots” in the supply chain. It said the brand’s suppliers definitely have the scope to improve their respective carbon footprints.

“This is why we think it is so important to have collaborative relationships with supply chain partners. It is only through working together that we can achieve the urgent reductions that are required,” the report said.

In 2018, Stella McCartney initiated a working group drawn from a variety of fashion and luxury brands that have a supply chain presence in Italy. Their aim was to discuss shared understanding and concerns, and to build supplier training opportunities together.

Last year, during an interview in Milan, McCartney said the working group was also proving a great way for suppliers and manufacturers to exchange ideas and find solutions to the vexing issues that stem from working with a vegetarian, sustainability-first company like hers.

In the latest report, the company said it has introduced a responsible sourcing guide for suppliers, which it describes as “detailed and comprehensive guidance” on its in-house sustainability standards and policies to date.

While greenhouse gas emissions and the extraction of raw materials from farms, forests and mines may have been the brand’s biggest environmental demons in 2019, water pollution also proved to be “a notable hot spot of impact,” according to the company, which called out its use of brass, which it plies into handbags and accessories.

Brass accounts for 77 percent of Stella McCartney’s water pollution impact due mainly to the way that copper, which is a component of brass, is mined. “We have been working to phase out [copper] and develop alternatives that have lower impacts and are more recyclable,” the report said.

The brand also looked at the total amount of land “occupied” by the business, and said wool and cotton farming make up 90 percent of its total land use impact across the supply chain.

Because traditional farming can be wasteful and damaging to the soil, the company believes “regenerative farming” is the future, because it reduces land use and greenhouse gas impacts.

“Restoring the health of the land is important for farmer livelihoods and building resilience to the changing climate, and is also an effective way to draw carbon out of the atmosphere,” the report said.

“Nature provides a number of carbon sinks that capture and store carbon emissions, such as forests, soils and peatlands. Nature-based solutions focus on conserving these ‘carbon sinks’ and have the potential to provide one-fourth of the climate mitigation needed to meet the 1.5° C[elsius] goal set out in the Paris Agreement.”

The company said it wants to promote a way of farming that prioritizes the restoration of soil health, improves carbon sequestration, enhances biodiversity and has a positive social impact for farmers and local communities.

With regard to the cotton supply chain, the company said it is working with a partner to test a series of regenerative farming practices “in order to rebuild soil health, improve water-holding capacity, enhance biodiversity and increase productivity and yields.

“This is not just about using organic cotton,” McCartney said in an interview last year. “We have to train and work alongside our suppliers, and we have pulled and encouraged and entered into many different conversations with them. How might we work with them to have access to the best quality craftsmen and mills?”

In the report, the company also pointed out that it stopped using virgin cashmere a few years ago. Instead, it uses recycled cashmere made from post-factory waste, eliminating the need for extra farmland for the cashmere goats.

Looking ahead, the company said the world is entering “into the most consequential decade for humanity, and the choices that we collectively make between 2020 and 2030 will determine what the future of life on our planet looks like.

“As a business, we think this means a move from managing and reducing impacts to conserving and restoring nature and its services, and doing what we can to transform the industry, creating the systemic change that is needed,” the report stated.