The pandemic is a defining moment in the lives of Gen Z consumers who remain constant, outspoken advocates for societal expectations and changes.

In addition to being one of the most outspoken advocates and influencers of societal expectations and changes, Gen Z is also a highly diverse group.

As the pandemic continues, studies show that Generation Z is paying close attention to reactions across corporate America. Known for being an energized force for activism, this generation has been categorized as smart and value-driven. And having grown up with technology as a part of everyday life they have proven comfortable in conducting research to support companies with shared values demanding the change they wish to see.

A new study by Gen Z Planet, a research and advisory firm focused on the next generation of “culture-creators, employees and consumers,” found that COVID-19 has been solidifying core characteristics and values for Generation Z. This is particularly true in relation to these consumers having a now even more cautious approach to spending, aspirations for a just world and overall optimism.

The pandemic, the study notes, is a “defining moment” for the generation, but it is only one in a series of pivotal events that have taken place which reinforces the belief that change is constant. According to Hana Ben-Shabat, founder of Gen Z Planet, “brands seeking to connect with this generation this means thinking strategically about their pricing architecture, the overall value they deliver and a renewed emphasis on being a good corporate citizen.”

Notably, data from the study also found that 73 percent of those surveyed said they plan to go to stores, particularly local stores, once cities reopen as much or much more than they had done previous to the COVID-19 epidemic.

“The pandemic has highlighted the vulnerabilities of small businesses and the need to support them,” Ben-Shabat said. “As a result, 40 percent of survey respondents said that going forward they will aim to support local small businesses. Gen Zers also have been paying close attention to how brands have responded to both the pandemic and recent protests against systemic racism, gravitating toward purpose-driven brands and favoring actions over words.”

Similar findings were seen in research conducted by research experts at LERMA/, the Dallas-based creative agency, in a report called “Gen Z Deconstructed: The Shifting Tides of Race & Diversity.” The report examines the power of Generation Z while dissecting key insights around various ethnic groups within the generation to understand the complexities and unique perspectives of Generation Z. 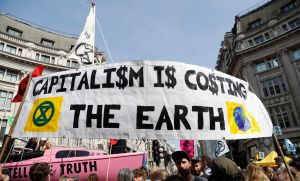 Protesters during a climate change demonstration in London.  Alastair Grant/AP/REX/Shutterstock

In addition to being one of the most outspoken advocates and influencers of societal expectations and changes, Gen Z is also a highly diverse group. According to the report, similar to Millennials, 63 percent of Generation Z is “Omnicultural,” meaning they have a “unified mind-set that crosses all ethnicities regardless of race and consists of a pattern of understanding, beliefs and behaviors that are shared due to being exposed to different cultures.” Still, the Gen Z Omnicultural mind-set increases by 22 percent compared to Millennials. According to the company, this is because there has been an increase of Omniculturalism from Caucasian members of Gen Z.

“This generation is much more inclusive and tolerant than past generations,” said Gina Rees, a psychotherapist working with Gen Z individuals. “It’s like anything goes with them and they are unabashedly committed to being themselves. Unlike other generations that think, ‘Oh no, we don’t do that…’ Gen Z says, ‘That’s who I am and that’s what I do.’ It’s ‘You do you’ on your own terms.”

Generation Z has also seen an increase in Hispanic and Asian adults who are more likely to identify and take pride in cultural heritage. Further, in the light of the police killings of George Floyd and Breonna Taylor, the report predicts Generation Z will be more “tuned into the evolving political climate than ever.” Data showed 59 percent of the Black members of Gen Z said race defines them. Moreover, among all ethnicities, Gen Z was found to be less likely to say that being an American is important to personal identity and reported to being skeptical that the U.S. is setting a good example for the rest of the world.

According to the company, “the findings prove that this group will help fundamentally shift society as we’ve known it — perhaps more significantly than any proceeding generation.”