Be bold, and authentic. Devote significant time to listen to customers. And maintain clear market differentiation while working to evolve a brand. These were some of the key takeaways from panel sessions during last week’s WWD Style Dimension, which was held during New York Fashion Week at the Cadillac House.

The day kicked off with a designer question-and-answer session led by WWD executive editor Bridget Foley with Laura Kim and Fernando Garcia, co-creative directors of Oscar de la Renta and Monse. The designers shared their career paths — his beginning after graduating with a degree in architecture from the University of Notre Dame, while Kim earned a fashion degree from Pratt. They met at Oscar de la Renta, left to launch Monse (named after his mother), then returned to the famed house in 2016.

Both acknowledged the importance of “maintaining lanes” for each brand. But many of the design processes are the same. “Building a collection is a very emotional process,” Kim said, adding that the collaboration is well-balanced. “He’s the dreamer, which is why it works so well.”

Garcia described their collaboration as balancing “the romantic and the realistic, and the masculine and the feminine.” Foley asked what happens if a consensus isn’t reached. “Then there’s a boxing match on Wednesdays,” he said, laughing.

Kim and Garcia both noted the importance of casting, which must complement the design or collection. “It’s also like directing a movie,” Kim said, adding that the process of collaboration, inspiration and design culminates on the runway.

Later, Jason Rembert, designer of Aliette, shared similar perspectives with WWD executive editor Booth Moore. Rembert shared his career path, which began on the editorial side at Harper’s Bazaar, Elle and W magazines after attending Hofstra University. Rembert said the learning curve was steep, but he learned quickly. “And I realized early that I wanted to be on the styling side,” he said.

Rembert noted the challenges he faced as an African-American. And today, despite efforts to change the industry, Rembert said “being a black stylist is hard in this industry. It’s hard to build connections, and find people who believe in you.” The designer urged attendees to be patient and persistent. “You have to educate brands and p.r. about your talent,” he added.

Maintaining a level of patience while being persistent was raised during a session on influencers. “How to Shop Like an Influencer” explored the mind-set and social media practices of top influencers. Panelists included influencer and clinical psychologist Christie Ferrari; influencer Sydne Summer, of Sydne Style, and Laurel Wolfe, a fashion industry expert and vice president of marketing at Klarna.

WWD business reporter Kaley Roshitsh moderated the panel, which noted the importance of authenticity — in brand positioning as well as how influencers present themselves on social media.

The panelists described shopping as an aspirational and emotional experience that simply aims to make people feel good. And when it comes to how successful influencers shop, moderation and discipline are key. They suggested a “high-low” approach where trend-right looks are coupled with “fashion investment” buys. Wolfe said there are also financial tools available to make the process easier, which include alternative payment solutions, installment payments and “try on, pay later” options.

The panelists noted the complexity of social media, and how it creates pressure on consumers to shop. They said people shouldn’t feel bad about splurging on certain items, but being smart about trending fashions can save in the long run.

DevaCurl chief executive officer Robert Schaeffler also discussed authenticity — in the context of beauty with WWD’s beauty financial editor Allison Collins. All emphasis was on the “curly girl” (and guy, as one attendee noted). The conversation began with Schaeffler’s career experience in the beauty industry and spiraled into a live model product demonstration, “curly hair care talk” and greater representation of natural hair in and out of the workplace.

With authenticity, women are embracing their “natural self” and wearing hair naturally is not just a rising trend, he noted, but a much applauded “statement to the rest of the world.”

A “digital first” approach was the topic tackled by designer Rebecca Minkoff and Court Williams, the creative lead of luxury fashion at Instagram, with WWD’s digital director Sophia Chabbott. They spotlighted the importance of making social media a meaningful part of your brand. 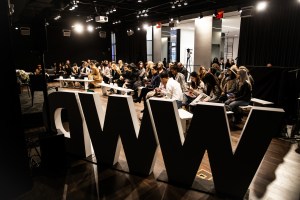 A “digital first” approach requires tactics for creatives and brand leaders aimed at cutting through social media noise, and with some one billion users on Instagram, everyone must propel their “creative equity” to exercise palpable influence.

“Brands today need to do a lot more listening,” Williams said. Minkoff, as a pioneer in “A/B testing” on Instagram, discovered that lesson early on and veers toward authenticity across her branded accounts. She even suggested a push toward iPhone-created content and letting her customers inside her personal life, referencing a holiday family photo as one of her top-performing positive feedback tests.

Aside from prioritizing social listening and focusing on details, incorporating strategies such as live broadcasting, one-to-one messaging and augmented reality could paint a bolder, more engaging content approach. Social media platforms personify the brand, and the consumer testifies as to whether this portrayed brand image warrants a follow or a mute.

During the “Red Carpet to Runway” session, celebrity stylist and best-selling author of “How to Accessorize: A Perfect Finish to Every Outfit” Micaela Erlanger and WWD’s style director Alex Badia chatted about the intersection of red-carpet icons with fashion’s major runway trends.

Examining the diffusion of couture trends onto the runway and spotlighting the Oscars, Badia began the conversation on one of the “biggest trends of the season” — the puffy shoulder. To which Erlanger commented, “More is more,” citing Lady Gaga and other starlet examples.

Erlanger talked “statement-making,” behind-the-scenes celebrity styling and the competitive nature of getting the right dress amidst the craziness of the exclusive couture scene whereby sometimes dresses are couriered by hand.

“There’s only one dress,” she continued, and putting a dress from the models on a runway onto an actress creates more variability. A lot of “magic and precision” goes into making a fit translate on the red carpet. And was Jennifer Lawrence’s 2013 Oscars stumble on purpose? This question and more were playfully addressed during the panel.