How to Shape a Sustainable Future Society, as Told By Prada

NEW YORK — Prada held its “Shaping a Sustainable Future Society” conference last week revealing the inherent inflection point for not just the fashion industry, but across industries and society at large as the world readies for a more sustainable future.

The company’s first convening of thought-leaders was in 2017 in Milan with the “Shaping a Creative Future” conference. Last year, the event took a different course in “Shaping a Sustainable Digital Future,” on par with the impact of digitization. The third edition was centered on sustainability, convening in the company’s New York offices, a former piano factory.

Also last week, Prada signed a loan with Crédit Agricole Group, which will grant 50 million euros over five years to facilitate the advancement of the fashion group’s sustainability targets. The conference helped continue the company’s momentum.

Taking a broad approach to business and sustainability, the speakers were from diverse global institutions with respective expertise in architecture, artificial intelligence and art, among other disciplines.

The conference was opened by Prada SpA chairman Carlo Mazzi, who illustrated the importance of understanding today’s global risks, directing the enthusiasm of future generations and embedding social relationships into the economic system.

“Sustainability goes beyond the border of any nation. We must remember that progress cannot take place in a vacuum but within society,” Mazzi said.

Architect Sir David Adjaye OBE examined how four international (and sustainable) design projects by his firm that aim to bring unison and light into their communities. They included the award-winning Smithsonian National Museum of African-American History and Culture in Washington, D.C., and the Abrahamic Family House on Saadiyat Island in Abu Dhabi, a competitive proposal his firm recently won. 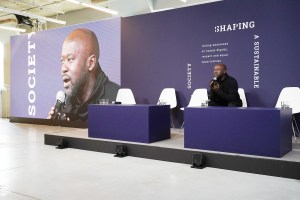 “Urban space is too valuable to be static,” said Larson as he outlined a project titled “Cities Without” that explores the impact of increasing urbanization and accelerating climate change. Larson believes the issues need to be solved at the local level. In contrast to city life, Armstrong presented a case for the countryside.

“Countryside, The Future” is an exhibition coming to the Guggenheim Museum in February that examines the urgent environmental, political and socioeconomic issues in the context of the “countryside,” or the 98 percent of the earth’s surface not occupied by cities.

“It’s really not useful for city dwellers to look down on everyone else,” reiterated Armstrong, whose message resonates more broadly on a political level. 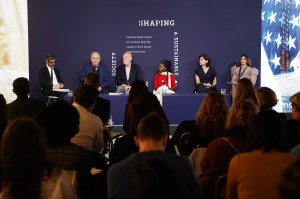 In another viewpoint, Pomodoro, who is respected in Italy for her public speaking and service, shared how “sustainability is tantamount to creativity,” adding that “the world of fashion has decided,” further claiming its stake and responsibility as a witness to change. She also pointed to Italy’s fashion sector as one that characteristically heralds beauty and the art of craft, a boost to sustainable design thinking.

As for Italy’s education system leadership, Riotta reminded the audience how the country was the first, just last week, to mandate climate change education for public school students of every grade.

Cutillo was curt in her words, saying “we are not doing enough.” The next 10 years are indispensable and 2030 is a “deadline that the UN and international community cannot miss.”

Gorman, the inaugural U.S. Youth Poet Laureate, presented a dash of Gen Z optimism, saying that: “We all have a claim and stake to fight for the world that we believe in.” She believes her generation is “already mobilizing,” looking toward a “type of freedom of an order that we have not seen before.”

She traveled with Prada to Slovenia for its Re-Nylon project, exploring the group’s use of Econyl. The company aims to use only recycled nylon in its products by 2021, as opposed to virgin nylon.

An inspirational speech was given by Paralympic champion Simone Barlaam, who outlined an overarching social purpose and the need for equality.

“Beliefs are top-down, experience and data are top-up,” said Dhar, who found that psychology matters more when speaking on corporate sustainability (less so the multiple-page reports that luxury brands produce on sustainability). This comes down to presenting data in a System 1 way for short attention spans, as “when there’s a lack of data, consumers will make up their own.” And caution to luxury brands: just edit down the sustainability reports.

This marks the third consecutive year that Prada has partnered with the school. As revealed in the study, a high-paying customer rightly expects more of social issues, and ethical improvements in one’s manufacturing may be the biggest perceived opportunity within luxury fashion — if it’s communicated well to the customer.

The end cap to the conference was a conversation on the social and ethical implications of AI between Kate Crawford, a distinguished research professor at New York University, and professor Raffaella Cagliano from the Politecnico di Milano School of Management. 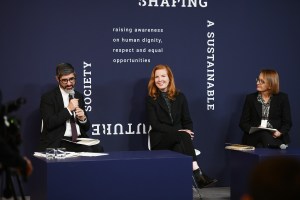 Kate Crawford and Raffaella Cagliano speaking on pushback within AI.  Courtesy of Prada

Crawford has been studying the field for the better part of 15 years, noting a “profound shifting of power” as the reality of AI is already here and the data is stacked unevenly against women and minorities.

Noting the input of human capital, natural capital and extractive data processes, Crawford said: “At every level, we’re not building these systems to be sustainable.”

“We have to be far more skeptical and evidence-led,” she said, adding that “data will always reveal structural biases.” Crawford cofounded the AI Institute in 2017 with Meredith Whittaker, and the institute is housed at New York University. Last month, the institute held its annual AI Now symposium, further outlining the pushback in AI.

Closing remarks were given by foreign policy analyst and author Rula Jebreal, who spoke about overcoming prejudice.

Prada will continue the conference series next year with the potential of holding it in a new location. The group will also continue to foster cross-industry dialogue and sustainable leadership within the luxury sector.