Nicolas Hayek, co-founder of The Swatch Group and billionaire businessman, died of heart failure on Monday at the age of 82.

By Joelle Diderich and Miles Socha and Katya Foreman on June 28, 2010
View Slideshow 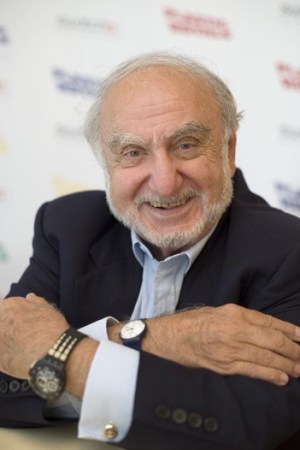 PARIS — Nicolas Hayek, the charismatic co-founder of Swatch Group who is credited with saving the Swiss watch industry in the Eighties, died of heart failure on Monday at the age of 82.

The billionaire businessman, known as Mr. Swatch, was chairman of the world’s largest watchmaker. Hayek was working at the company’s headquarters in Biel, Switzerland, when he was unexpectedly taken ill, Swatch Group said.

“Mr. Nicolas G. Hayek’s greatest merit was his enormous contribution to the saving of the Swiss watch industry and the foundation and the commercial development of the Swatch Group,” it said.

“With the right personnel decisions, Mr. Nicolas G. Hayek also ensured that his ideas and beliefs will live on and that continuity is guaranteed in regard of shareholders, board of directors and the group management board,” the firm added.

His son, Nick Hayek, is chief executive officer of Swatch Group, which owns 19 brands running the gamut from luxury to mass, including Breguet, Blancpain, Omega, Longines, Rado, Tissot and Swatch.

Swatch also provides the bulk of movements and components used by other watchmakers through its subsidiaries.

Born in 1928 in Lebanon to an American father and a Lebanese mother, Hayek was a risk-taking entrepreneur who stepped in to reform the Swiss watch industry at a time when many firms faced bankruptcy due to competition from cheap Asian quartz watches and poor management.

“He was a true visionary,” said Bernard Fornas, president and ceo of Cartier International SA. “He saved the Swiss watch industry at a time when no one believed it could be done. He defended the industry he loved.”

Having studied science and mathematics, Hayek set up his consulting firm Hayek Engineering AG in 1963 and rapidly gained a reputation as an unconventional thinker.

Refusing to sell to Japanese bidders, he consolidated the Swiss watch industry by merging its two leading manufacturers, SSIH and ASUAG, and then set about reclaiming the entry-level market with the launch of the $30 plastic Swatch watch in 1983, which has since become a case study for business management schools.

Hayek stated his philosophy on the Swatch Group Web site: “We produce beauty, sensuality, emotionality in watches — and we also produce high-tech on your wrists. Both emotionality or poetry and high-tech are part of what we feel towards our customers.”

With its dynamic design, accessible pricing and clever marketing, the Swatch became the most successful wristwatch ever created, with more than 250 million units sold to date. Collectors eagerly snapped up special editions designed by artists including Keith Haring and fashion designers like Vivienne Westwood.

“The industry was moribund before he took the reins at SSIH,” said Philippe Mougenot, president of Chanel’s watch and jewelry division, who never met Hayek but knows his son. “He was one of the most important entrepreneurs for the industry over the past 50 years.”

In 1985, Hayek acquired a controlling stake in SMH, the company born from the merger, which he renamed Swatch Group in 1998.

Thanks to the success of the Swatch, he was able to invest in new factories, snap up other ailing brands and protect skilled workers from mass layoffs. Indeed, Swatch Group has made a long-standing commitment to preserving jobs, refusing to waver from its credo even during the 2009 economic downturn.

“He was a true leader,” said Christian Bedat, co-founder of Bedat & Co. and the Swiss watch guru behind the Web-based brand Red8world. “It was hard to say no to him.”

Bedat — whose mother Simone, co-founder of Bedat & Co. and a founding partner of the Geneva firm Raymond Weil, passed away recently at age 79 — said she and Hayek were both members of a generation that saw providing jobs as a responsibility that went along with building a successful business.

“I think he really cared,” Bedat said. And in creating the democratic Swatch brand that could generate big volumes, “the top end could survive.”

Bedat recalled that Hayek would always pay a visit to his stand during the Baselworld watch fair to offer encouragement and praise.

Antoine Belge, luxury goods analyst at HSBC in Paris, noted Hayek was “the first to anticipate that China would become an El Dorado for luxury products and, as a result, Omega is now by far the market leader in China.”

Other retailers joined in paying tribute to Hayek.

“We have the utmost respect for what he has built within our industry,” said Candy Udell, president of London Jewelers. “He always handled his business with great pride, integrity and professionalism and we will miss him.”

James Seuss, ceo of U.S. watch retailer Tourneau, said: “The Swiss watch industry will miss his amazing vision and leadership. He was a major driving force behind the global growth of the watch category.”

Nonetheless, Hayek had a provocative streak and was capable of sending shock waves through the industry with a single statement.

The first bombshell came in 2002, when Swatch said it would phase out the supply of watch movement kits, known as ébauches, to the rest of the market. That move will be completed at the end of this year.

Then last year, Hayek said he wanted to go further by stopping deliveries of Swatch’s entire range of components, arguing that Swiss watch brands have relied too heavily on Swatch and failed to invest enough in developing their own know-how.

Such a move will likely take years to implement, since Swatch’s dominant position means it must consult the Swiss Competition Commission before taking any decisions that will have a significant impact on the market.

So surprised were his competitors that many suggested he was merely saber rattling, though, tellingly, a number have made very well publicized moves to produce their own movements in-house.