Retailers are coping with slow growth by battling to take market share from competitors. 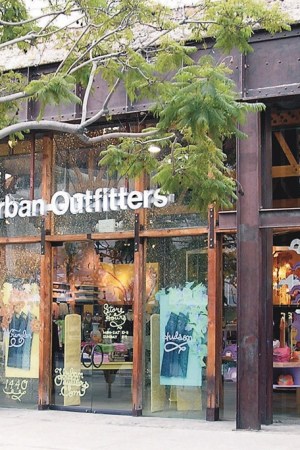 This story first appeared in the March 10, 2014 issue of WWD. Subscribe Today.

To grow and keep ravenous investors happy, retailers need to do everything they can to push their competitors out of the consumer’s mind — in the process squaring off against everyone from the store across the mall to the hot new line, the latest gadget, the new food trend, the most popular app and more.

For retailers, every dollar spent elsewhere is a problem in a world where so few new stores are opening and C and D malls are in danger of going dark. The market share battle is growing even more intense given the increasing pressure on physical stores as retailers go bankrupt (most recently, Dots), struggle with paradigm shifts (Radio Shack, Best Buy) or simply trim their store portfolios to focus on the best-performing units (J.C. Penney Co. Inc., Macy’s, Sears, Nordstrom, Saks Fifth Avenue, Abercrombie & Fitch and more).

The only solution is for companies to constantly up their game.

To win, brands and retailers — even channels of distribution — need to be more stylish, faster and, if not cheaper, then serving up more value to customers. That might mean better sales staff, finer workmanship, some new digital feature or just a little more sizzle. And when brands market their wares, they need to reach for new levels of sophistication, whether in social media, outdoor, TV or cause marketing.

Even Terry J. Lundgren — who as Macy’s Inc.’s chairman, president and chief executive officer has built a $27.9 billion department store empire that’s lauded as a leader in its segment — can’t just ride the wave of his success.

“You have to take market share,” Lundgren told WWD in the midst of the Black Friday rush.

Lord & Taylor opened up on Thanksgiving in 2012, and nearly everyone, including Macy’s, followed suit and kicked off the holiday season this past November even before the turkey had cooled. “We knew people were ready to shop,” Lundgren said. “If we didn’t open at 8 [p.m. Thanksgiving Day], we would definitely have lost customers to other stores opening early. I’m glad we did.”

Lundgren knows better than anyone that one must constantly adapt and improve to survive, since Macy’s itself is the end result of decades of industry consolidation.

While Macy’s has endured, even thrived, the traditional department-store channel as a whole has proven to be extremely vulnerable to market share declines over the past two decades, according to a WWD study of Commerce Department sales data. The study looked at sales at department stores, discount department stores, apparel and accessories specialty stores, nonstore retailers and warehouse clubs and superstores.

Traditional department stores saw their share of the total consumer dollars spent at those five types of retailers shrink to 5 percent last year, down from 19 percent in 1994. Discount department stores and specialty stores also saw declines.

Together, those three segments gave up massive chunks of business to nonstore retailers, warehouse clubs and superstores — which controlled 67 percent of the market last year, up from 32 percent in 1994.

That gain — by superstores and online players — has flowed not from quick price promotions or a strong season here or there, but by a set of broader strategic decisions that kept pace with sweeping changes in the market.

“Pure, incremental gains in your business, that will come out of being ahead of things rather than always playing catch-up,” said Arnold Aronson, managing director of retail strategies at Kurt Salmon.

The increasing battle for market share over the last few years has driven almost every fundamental change in the industry. For example, Fast Retailing’s reported offer of up to $5 billion for J. Crew Group fits in with the Japanese company’s goal of becoming the world’s largest apparel retailer, climbing ahead of Zara, H&M and Gap Inc. Grabbing more share encouraged Hudson’s Bay Co.’s Richard Baker to snatch up Saks Fifth Avenue and a larger piece of the luxury retail pie; pushed Nordstrom and Target into Canada; nudged the likes of LVMH Moët Hennessy Louis Vuitton and Kering to invest in young designers; drove performance brands such as Under Armour, Nike, Lululemon and others to push the technical limits of apparel, and forced every major fashion brand and retailer to develop omnichannel strategies.

Even the leaders can’t rest on their laurels. Amazon.com ceo Jeff Bezos, for instance, built an online bookstore into an everything-under-the-sun destination with revenues of more than $74 billion, but instead of producing big profits, he’s been feeding the beast and reinvesting in growth. The superstores feel him breathing down their necks, so Wal-Mart and Target are pouring millions into their tech efforts and trying to turn their brick-and-mortar stores into a digital advantage.

Neil Ashe, president and ceo of Wal-Mart Stores Inc.’s global e-commerce business, told investors, “Retail and our company, in specific…has always been about how do we build the next thing that the customer wants so that we can gain the greatest market share; e-commerce is just the next wave of that. Our view is that this is all growth. If it happens to come at the expense of some of our existing revenue, we would have — that would have migrated away from us anyway.”

Wal-Mart’s road map to share gains is relatively simple: brute force paired with a relentless focus on low prices and a massive infrastructure to feed its more than 11,000 stores globally.

Whereas Wal-Mart and Amazon have grown by appealing to the broadest of audiences, a well-crafted and narrower focus can also lead to gains.

Analysts, for instance, project Michael Kors Holdings Ltd.’s sales will show a gain of 47 percent for the fiscal year ending this month as it continues to push out its version of the accessible luxury handbag. Under Armour Inc. logged a 27.1 percent sales gain last year, while Lululemon Athletica Inc. is seen expanding 15.9 percent — both on the back of high-tech workout gear that garners higher prices and carries a certain prestige. But it’s a strategy with some risk, since zeroing in on a narrow group of customers can also play against companies as shoppers or tastes change. Exhibit A: the teen retailers.

“Teen apparel is really struggling,” said Sarah Quinlan, group head and senior vice president of MasterCard Advisors, speaking broadly about the sector. “It’s just been again and again, each week, really struggling to even increase the number of transactions.”

These losses might say as much about the teen consumer as the companies themselves.

“We know this Millennial group is unfortunately underemployed,” Quinlan said. “They don’t have enough discretionary income.”

Teens aren’t in a complete spending lockdown. The Urban Outfitters chain has seen some growth and room to open new stores, with revenues rising 10.4 percent last year. And young people continue to find the financial wherewithal to buy the latest gadgets and fill them up with new apps.

Even while the perfect item can induce shoppers to reach for their debit card, the economy has clamped down hard on shoppers, particularly lower-middle-class consumers — who nonetheless continue to thirst for brands on a budget.

“What you’re seeing is a bifurcation in the retail space, but you see it on income as well,” said Chris Christopher, U.S. economist at forecasting firm IHS Global Insight, who noted the median household income has been on the wane.

“Some people are having a hard time,” he said. “Wage growth is not so good, and they’re saying, ‘We have to be careful.’”

That consumer reticence has supercharged retail competition, creating a dynamic that’s helped off-pricers such as The TJX Cos. Inc. and Ross Stores Inc. and hurt moderately priced chains such as Sears and J.C. Penney — which have also each done plenty to hurt themselves.

“I don’t think any of those off-pricers are going to go backwards,” said Mark Montagna, an analyst who covers value retailers at Avondale Partners. “The brands now depend on those retailers to grow. It’s pretty high risk for the malls going forward. [This] could be another year of really bad traffic. If people are shying away from the mall, they’re still going to need to buy sweaters and tops because Americans are addicted to shopping.”

Overall U.S. retail sales rose 4.2 percent in 2013, a disappointing growth rate that is down from gains of better than 6 percent before the recession.

One way to build share as overall sales growth gets caught in the mud is to move toward the action.

“If you want to grow your market share and there’s a segment of your market that’s growing three times [as fast as] the rest of the market, well you probably want to dip your toe into that,” said Craig Johnson, president of Customer Growth Partners. “That’s not rocket science.”

Kors and Kate Spade are making space for themselves in the accessible luxury bag market that Coach Inc. owned for years; Gap Inc. with Athleta and Under Armour with its push into women’s are going after Lululemon; Tory Burch has moved into beauty, and so on.

While price is a part of the market share equation — the most obsessed-over part — it is not everything.

“It’s very easy to buy unit market share by lowering your prices,” Johnson said. “Price is usually not the major factor in market share success. Price is typically the most important factor to consumers only about 20 percent of the time. That’s an important element, but it’s not the be-all, end-all.”

So apparel brands, besieged on all sides, can buy market share — but only to an extent. To gain ground otherwise, they need to hone their reflexes, sharpen their senses and strengthen their offerings.

The battle is already raging.