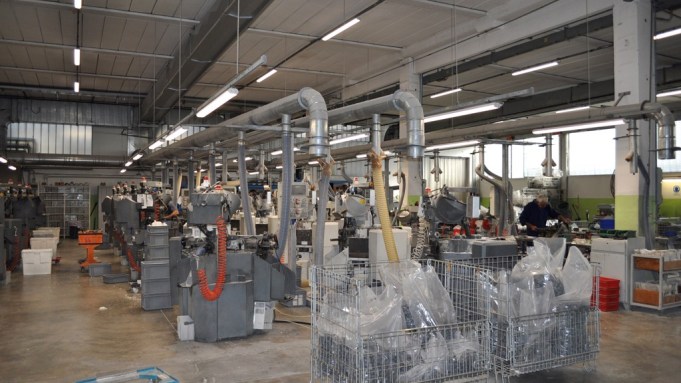 Italian fashion houses like to tout the artisanal quality of their products: Made in Italy, they say, means not only beautiful, but well-crafted. Less publicized are the working conditions of those doing the crafting, although following the Rana Plaza disaster in Bangladesh this year, some Italian firms are shining a spotlight on that aspect of business, hoping that consumers will come to view it as a compelling reason to buy Italian clothes.

“In 2012, the Italian textile industry brought in about 8 billion euros [about $10.7 billion] leading to an active trade balance of over 2.5 billion euros [about $3.34 billion],” said Silvio Albini, president of the Milano Unica textile trade show. “So there is a significant monetary added value, but also a very important intangible added value — which is difficult to quantify but that is intrinsic in the value of clothing made with our textiles.”

According to a report published by fashion and textile consortium Sistema Moda Italia, from January to May of this year, intra-European Union exports of Italian textiles dropped 3.6 percentage points, and exports to non-EU countries dropped 3.2 percent.

How something is made affects quality, said Claudio Marenzi, president of SMI and of Herno, the high-end sportswear company.

“In my opinion, it should be an added value for consumers knowing that what they are wearing is not only high quality in terms of the cloth and the production techniques and so forth, but is also ethically correct,” he said. “I must say that, alas, based on the marketing studies that have been done with consumers, there is relatively little sensitivity to this….At the time of purchase, what counts is the balance between quality and price, and brand awareness.”

Consumers might be oblivious to working conditions, but fashion companies that hire artisanal operations to manufacture their collections are anything but, said Luciano Barbetta, sole administrator at Barbetta Srl, a firm in the southern province of Lecce, Apulia, that supplies finished clothing items to luxury fashion firms, and provides a range of services including textile research, fabric testing and washing. He said his clients — 90 percent of which are non-Italian — are extremely attentive to their supplier’s compliance with safety, health and environmental regulations, and frequently send inspectors to visit the site and those of its affiliated suppliers.

“They want to see that the machinery is safe, that salaries are in line with Italian norms and the cost of living, that we’ve paid our taxes,” he said, noting that one major client — Gucci — was especially involved in checking up on factory conditions.

About 150 people work directly for Barbetta, and another 150 work at nearby businesses that together form a network of specialized artisans with “an almost exasperating attention to detail,” Barbetta said. Most of the staff at Barbetta is female, and all employees work eight hours a day.

He also said in countries where the cost of living was lower, it was natural that factory workers earned lower salaries, thus creating competition. “But those who want to delocalize should first verify that safety conditions are respected,” he said. “That’s the globalization gap. This should be of concern to everyone.”

Fiorentino Bettoni, owner of Deb, a button and belt production company headquartered in Bergamo — affectionately known as “Button Valley” — said he had about 20 employees in Italy and 20 in a factory in Hungary. Both EU countries, he said, follow strict laws concerning safety.

“Hungary used to be even stricter than Italy, then we caught up,” Bettoni noted.

Italian manufacturing is concentrated on the mid to high level of the market, he said. “There are advantageous prices elsewhere, but safety and quality are less certain and vary in many cases, whereas in Italy one can be quite sure of standards,” he said, citing noise levels, cleanliness, pollution and safety among inspectors’ concerns.

Raffaele Caruso SpA, a Neapolitan company that moved to Soragna, near Parma, in 1958, is known for its sartorial men’s suits. President and chief executive officer Umberto Angeloni said 92.7 percent of Caruso’s employees have permanent contracts and all work regular eight-hour days, five days a week.

“The company promotes a culture of safety, developing an awareness of risks and promoting responsible behaviors for all employees,” he said.

Barbara Donadon, ceo of Altana SpA, a children’s wear production company based in the northeastern Veneto region, near Treviso, said the firm’s clients are very demanding in terms of worker safety, “from drawing up the contract to managing the everyday work.”

“Inspections are done periodically, both internally and by our clients’ specialized departments,” she said. “Our approach is systematic: Safety is not seen as an external element to our various activities, but as an integral part of production processes.”

Donadon noted Altana’s employees had approximately six weeks vacation every year and their contracts were the result of collective bargaining.

Francesco Rotondi, founding partner of Lablaw, a Milan studio specialized in labor law, said in the early Nineties, Italian laws started becoming more European in scope. Today, member countries must follow EU directives, although they each have some autonomy in implementation based on their existing socioeconomic systems. “Italy did not have much trouble adapting to the European directives, because its system was already among the most protective,” Rotondi said, noting that in the Sixties and Seventies, there was a big movement to improve workers’ conditions. More recently, the focus has shifted to giving employees a reasonable work-to-life balance and ensuring workplace safety.

RELATED STORY: Training the Next Generation of Italian Artisans >>

Italy differs from other European countries in the dominant role it gives workers’ unions, which must follow the laws of the Italian Constitution but have significant freedom in negotiating the specifics — working hours, time off, minimum pay — through collective bargaining in the form of private contracts with unions representing companies.

“The Constitution determines that workers must get time off, for example, but collective agreements determine exactly what that means for each sector,” Rotondi said.

Companies, meanwhile, are required to file detailed information about their operations with the government, signaling how much overtime their employees have worked, and offering evidence that foreign employees are in the country legally and have a home, for instance.

A judge has the power to decide whether specific private contracts follow the spirit of Italian and European laws. If workers feel that their rights have been violated, Rotondi said they can individually file complaints with the authorities and take their employers to court, or they can ask their unions to file complaints on their behalf. If authorities discover unsafe working conditions during inspections, they may also take companies to court. Penalties can be civil, requiring the payment of damages, or criminal, leading to prison sentences.

“We can improve on the application of our laws,” Rotondi said. “Our system has evolved out of 2,000 years of experience, so we have a good legal structure in place. It’s in the efficient execution of our laws that we can improve.”

Marenzi of SMI agreed, noting: “I’ve seen factories just about everywhere, from eastern Europe to China, the Midwest in the U.S., Japan…Italy is a country where international consumers can rest easy — in terms of products and in terms of the workers making the products, we are at the highest level.”

“Overall, I find Italy ethically sound. What doesn’t work in Italy is the bureaucracy, which is too slow,” he concluded. “The inspections and authorizations take too long…and hiring is a tie almost stronger than marriage.”

Leaders in the Italian fashion industry believe their companies are doing everything possible to protect workers’ welfare. It remains to be seen if consumers will reward these efforts.