While Western consumers remain reluctant to shop in stores this year, pop-up experiences are thriving in the biggest retail market in the world.

Global luxury brands such as Gucci, Burberry, Fendi and Bottega Veneta are all using pop-up stores to launch new concepts and show off their omnichannel capabilities in the China market.

We take a look at some examples and observe why such pop-up stores are crucial to reach increasingly affluent Chinese Millennials — and why U.S. and foreign luxury brands need a China strategy to fuel growth during this decade.

For Chinese Valentine’s Day this year (aka Qixi Festival, held on Aug. 25), Fendi launched pop-up stores in Beijing and Chengdu to celebrate its newest capsule collection, in partnership with Mr. Doodle. Also known as Sam Cox, Mr. Doodle is a British artist who is well-known for his doodles drawn with thick black markers.

Along with these pop-up stores, Fendi also set up mini-cafés with tables and plates adorned with his graffiti. 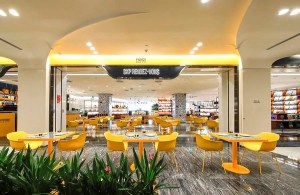 Lastly, customers could also purchase items from the capsule collection through Fendi’s official WeChat mini-program store. China’s pervasive social media platform, WeChat, has become increasingly popular in recent years as a channel to launch limited-edition item collections, predominantly because of its wide reach and designation as a go-to platform for popular influencers in China.

For the upcoming Chinese Valentine’s Day (Qixi Festival), Dior also launched pop-up stores in Chengdu, Beijing and Shenzhen to celebrate its new love-themed Dioramour capsule collection. Angelababy, a highly sought-after actress and Dior’s main brand spokesperson in China, attended the opening ceremony in early August. Other celebrities who attended were brand ambassadors Liying Zhao and Jing Tian, both of whom are actresses. 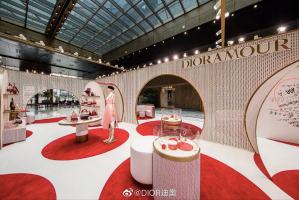 Dior’s pop-up shop and influencers celebrate love in time for the Qixi Festival.  Courtesy of Dior

Dior’s WeChat mini-program recommends different items to people, and each item comes with a video introduction from Angelababy herself. What’s more is that the mini-program incorporates a social element, inviting fans to share the items on WeChat with hashtags. The comprehensive collection includes everything from handbags to shoes, scarves, glasses and jewelry. 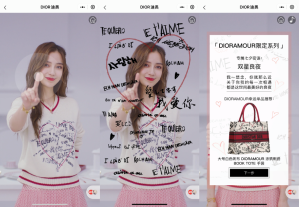 From June 16 to 29, Burberry set up Animal Kingdom-themed pop-up stores in Shanghai, Shenyang and Nanjing. The stores were designed to show off its newest spring 2020 collection, which included elements of wild animals imprinted onto its products. The stores hosted lime-green statues of giraffes, monkeys, gorillas and birds to reflect the occasion. 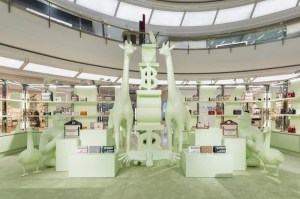 But what’s intriguing is that the pop-up stores were equipped with augmented reality technology; visitors could scan items in the store and moving images of birds flying around would show up on their smartphone screens. Such an innovative feature helps companies to stand out among the competition; more and more brands are turning to technology to provide a unique experience for their customers.

On July 3, Bottega Veneta unveiled its “Invisible Store” in Shanghai’s ritzy Plaza 66 mall, which is known to house stores from all the major luxury brands. The pop-up store was designed to launch the brand’s pre-fall 2020 collection, which consisted of small leather goods, shoes and eyewear for both men and women. 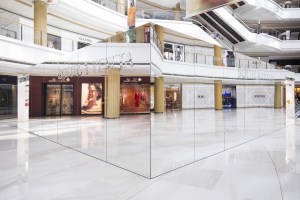 The exterior of the store was lined with mirrored panels so shoppers couldn’t see what’s inside until they entered. From a distance, the store even looked as if it couldn’t be seen. At the launch party on July 3, celebrities in attendance included actors Yu Fei-hung, Jing Boran and Joey Song.

Lastly, customers could reserve VIP appointments at the store on Bottega Veneta’s WeChat mini-program. VIP booking functions have become standard in the luxury industry as brands look to provide the best and most personalized service for their customers.

1. Luxury brands in China are launching experiential, omnichannel pop-up stores to cater to tech-savvy Millennials. WeChat has been key, as its mini-programs enable brands to adopt features such as AR scanning technology, off-line appointment booking and social sharing incentives.

2. Fendi and Dior both launched pop-up stores in anticipation of Chinese Valentine’s Day, Qixi Festival, which takes place on Aug. 25. Fendi’s collection was a partnership with British artist Mr. Doodle, while Dior’s collection was love-themed and included recommendation features on its official WeChat mini-program.