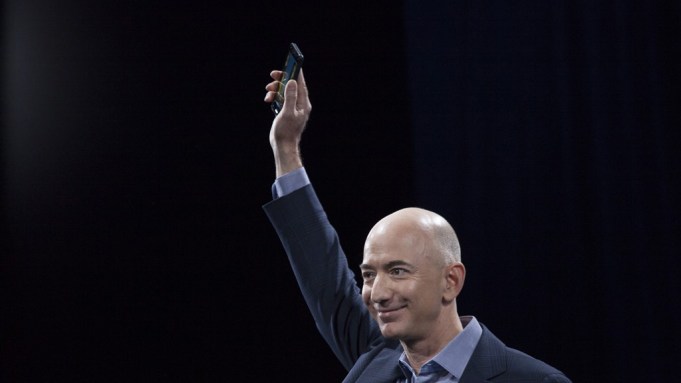 The hottest digital real estate is still up for grabs.

The competition is fierce to control the mall in consumers’ pockets and the victor — should one player gain a commanding share of the mobile market — will be in prime position to shape the next phase of commerce.

Tech giants and brands alike are scrambling to develop apps and optimize their Web sites to accommodate an on-the-go consumer who expects a seamless experience. The rush to control the channel has been front and center this week. First, Wal-Mart Stores Inc.’s @WalmartLabs bought shopping app Stylr in its drive to improve its mobile commerce. Then, on Wednesday, Amazon entered the ultracompetitive fray by launching its own smartphone, the Fire. For Amazon, the goal is less about the device than it is to grab a greater share of mobile commerce.

And no wonder — mobile is on course to dominate digital traffic. Cisco’s state of the Internet report this month said mobile devices would make up 57 percent of all Internet traffic by 2018, up from 33 percent last year.

Mulligan said that is where Target believes it can gain an edge over the likes of Amazon — although Amazon clearly won’t cede any ground easily. Jeff Bezos, founder and ceo of the e-commerce giant, introduced the Fire, which ships on July 25 and is available in 32GB and 64GB versions retailing for $199 and $299, respectively. The phone features a 4.7-inch screen, unlimited storage of photos in Amazon Cloud Drive and a Firefly tool that uses the phone’s camera to identify things in the physical world, such as QR codes, books and games.

The company already has a strong position in mobile, at one time controlling up to a third of mobile commerce, according to reports. But as smartphone adoption soared and more retailers enhanced their mobile experience, Amazon’s share has declined, according to Matthew Nemer, an analyst at Wells Fargo. He estimated Amazon and eBay each command about 20 percent of mobile sales, and that eBay is now “pretty close” behind Amazon.

EBay’s Marketplaces and PayPal each exceeded $20 billion in mobile volume; Amazon, which didn’t respond to a request for comment, doesn’t break down sales by channel.

Based on a study earlier this year in cooperation with Forrester Research, Shop.org on Wednesday singled out the mobile “movers and shakers,” pointing to Amazon, Facebook, Wal-Mart, Starbucks, Rue La La, ModCloth, eBay and Groupon. The diversity shows that there are many ways for businesses to use mobile to attract customers.

The most-buzzed-about mobile player is Uber — established as a mobile-first transportation company in 2009 that is valued at $18 billion — even as it hits some road bumps in expanding into Europe.

Then there’s Domino’s, which is seen as implementing forward-thinking strategies in mobile that have helped make the 54-year-old pizza chain more relevant.

“Domino’s is a business that existed before the Internet; it literally had to respond to and lead the transformation from being one type of business to another,” said Ivan Perez-Armendariz, chief creative officer of CP+B, the agency credited with Domino’s digital transformation. Perez-Armendariz said when the team at CP+B started working with Domino’s several years ago, less than 20 percent of transactions came through e-commerce. Now, close to 50 percent of the company’s sales come from online, much of this driven by its smartphone and iPad apps. In 2011, Domino’s saw a doubling of Web traffic coming from iPads, which “allowed us to justify the investment in the iPad app,” he said.

Two months ago, Domino’s released its iPad app with a custom 3-D pizza builder, adding on to the mobile experience that was fueled to popularity by its pizza tracker, a real-time tool that tracks the progress of a customer’s order.

Perez-Armendariz contended that while the tracker is not transactional, it is an integral part of the customer experience.

“You press click and your first question is, ‘Where is my pizza?’ and the tracker really tells you,” he said. “It tracks operations and efficiency, and we saw an opportunity to layer customer experience on to that. It’s delivery transparency and [tells] a delivery story.”

Domino’s pizza tracker shows how mobile can be used not only as a sales channel, but also to improve customer service. And that’s what Nemer believes the industry should be focused on.

“Mobile revenue number doesn’t really mean anything. We’re measuring the wrong thing,” he said. “It’s in such upward growth mode that it doesn’t matter who owns it now. It’s a very fluid situation so I think the story is still being written. The winner now isn’t the winner in two years.”

He maintained that it’s not mobile revenue that matters, but the promise of getting consumers on the go to buy more on all channels as well as visit and engage more with a brand. Wal-Mart’s @WalmartLabs said Tuesday that more than half of Wal-Mart smartphone users have used their phones in-store to assist in their shopping, while 80 percent of its customers under age 35 own a smartphone.

“All of these companies are saying [m-commerce sales] grew by 120 percent — but they’re measuring the wrong statistic,” Nemer said. “It’s a superimportant piece of the shopping trip, but I don’t care whether they convert on the phone or not. You just want them to buy somewhere.”

Conversion rates remain relatively low on smartphones, which are best suited as a portal to get information on the journey toward buying something. Instead of fixating on mobile purchases, Nemer said the focus should be on using these devices to locate a store, check a price or share a product with friends via the social channels, text or e-mail. According to Wells Fargo research, m-commerce comprised 13 percent of e-commerce last year, up from 9.3 percent in 2012. But while the category is growing quickly, it still makes up only 1 to 2 percent of all retail sales. According to Forrester, mobile conversion rates are about 0.5 percent for smartphones versus 1 percent for tablets and 2 to 3 percent for desktop.

Retailers disagreed with Nemer’s view, however.

“We think about it [mobile] as sales-driving, and we do everything we can to create a frictionless mobile experience,” Dolan said.

The same goes for eBay. Steve Yankovich, vice president of innovation and new ventures, attributed the company’s “going-all-in” approach to mobile, as well as its early efforts to build an app for every platform, as part of why it’s seen such success in the space.

For Yankovich, it boils down to where a consumer is inspired or became aware of a product. The company sees capturing a consumer at that point of awareness as critical in the purchase journey.

“If I didn’t have a great way to buy something like that on my phone, the brand would have to rely on me at some point when I’m at a computer to remember to check them out,” Yankovich said. “[Our success is] a proxy for the fact that that is what people want at the very moment they decided, ‘I’m going to get this thing.’”

He said that between the stages of awareness and “pulling the trigger” there is no time delay at all on eBay in mobile. Yankovich calls it “death” for a mobile destination if a consumer doesn’t make a find and complete the buy as soon as possible.

Regardless of whether it’s to drive sales or build awareness, m-commerce is still in its infancy. Sucharita Mulpuru, vice president and principal analyst at Forrester, said brands still have to figure out a way to follow shoppers across multiple devices, and not just their phones.

The big issue for her is attribution and finding the right way to document a customer’s behavior when the path to purchase occurs on more than one device.

“That’s an important part of recognizing what people are looking for and serving them. I don’t think anyone understands that,” Mulpuru said.

She did acknowledge that as far as winners in the mobile game go, Amazon and eBay are in the lead, but are being chased by daily deals sites such as Groupon, Gilt Groupe and Zulily as well as car service Uber and pizza maker Domino’s.

“The rest is very fragmented. I don’t think anyone really captures more than $1 billion of what’s left,” Mulpuru said of mobile sales. “The truth is that no matter how we look at it, it’s not like mobile has caused anyone’s business to explode — other than Uber. Sales growth year-over-year is similar to what it was pacing before. More people are buying online in general, but they are also buying on a desktop.”