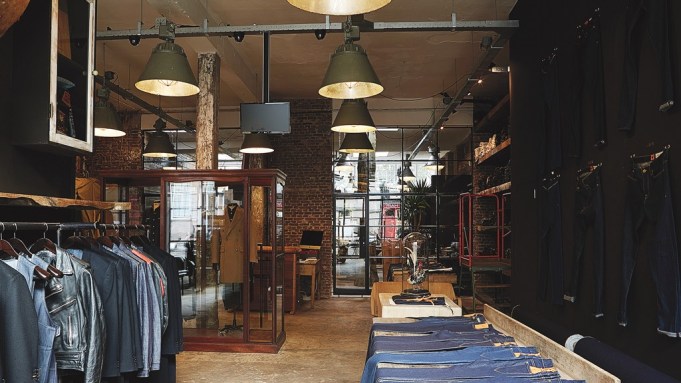 Jason Denham left London for Amsterdam as a young man expecting to be back. Seventeen years later, he’s still there and has no intention of leaving.

“The Netherlands is an amazing place for the jeans business,” said Denham, founder and chief executive officer of Amsterdam-based Denham the Jeanmaker. “We have a saying that ‘the Dutch eat jeans for breakfast, lunch and dinner.’”

While the adage might be an exercise in hyperbole, Denham said, “Dutch design and Dutch innovation are very practical, well considered and thought through, and that suits the jeans business.”

So does its location and world-class airport, making it “easy for us to get around and do business in Europe.”

“A trading country by history, the Netherlands is an international place,” he said. “I love to get the flavors of international knowledge, experience and taste,” Denham said, noting that his Amsterdam workforce includes people from the U.K., the U.S., Holland, Germany, Italy, France and Japan.

The Netherlands, and Amsterdam in particular, is thought of as the European denim capital. The country is believed to be the European market with the highest per capita consumption of jeans. According to research by Amsterdam’s research agency, Ruigrok-NetPanel, the average resident of the city has 5.1 pairs of jeans in his or her closet.

With its long history as an international trader and more recent heritage as a bastion of personal freedom and environmental awareness, Amsterdam and the Netherlands would seem a perfect place for denim devotees. Brands such as Levi’s Vintage, Hilfiger Denim and Pepe Jeans have offices there, while G-Star, Scotch & Soda, Denham, Kuyichi, Blueblood, Kings of Indigo and a throng of new and innovative denim ateliers are headquartered in the country.

“The Dutch people like comfort, and the way we get around is mostly by bicycle,” said Sam Cruden of C. Cruden in Rotterdam, who moved back to Holland to start her own denim collection following work at Diesel. “Those are some of the main ingredients of why Holland is a denim country.”

She noted that, as a merchant, “sustainability is not my topic, but it is part of my social life.”

Industry figures, along with the country itself, are taking steps to cement the bond between denim and the Dutch. In September, Holland launched the world’s first Jeans School, cofounded by House of Denim’s James Veenhoff, director of Amsterdam Fashion Week, and Mariette Hoitink from the fashion consulting and recruitment firm HTNK. The project was executed by ROCvA, the largest educational organization in Amsterdam, and accredited and funded by the government. The school aims to lay the groundwork for jeans to have a long and vital association with its favorite piece of apparel.

“We want to make the industry dryer, cleaner and smarter,” said Veenhoff. “Therefore we have to provide some technological innovations.”

A major element of the school is teaching sustainability and green methods of producing and laundering jeans, as well as addressing end-of-life issues. The school has partnered with Kleding Inzameling Charitatieve Instellingen, Holland’s largest independent used-clothing collection charity, which will provide students with recycled denim with which to work. In addition, the school and KICI will be developing a domestic fabric using recycled denim and locally grown hemp and woad, an herb that’s a member of the mustard family. This is all part of Veenhoff’s three- to five-year plan and the school motto, “Heading for a Brighter Blue.”

Shubhankar Ray, global brand director of G-Star Raw, said, “Amsterdam’s geographical location makes it easy to get everywhere. We are close to the biggest denim market in Europe, which is Germany. This small city has a high level of multiculturalism and is open to progress. Amsterdam is a melting pot that fuels creativity. The natural conditions here allow us to create denim innovation and denim modernity. It is not a surprise that the first school of denim was started here.”

G-Star conducts seminars at the school and takes in students to provide them with vocational experience. “We support new talent by giving awards in education,” Ray said. “We take in students from the Jeans School so they can have real hands-on experience working with a major denim brand.”

Karl-Heinz Müller, ceo of the Bread & Butter trade fair and the denim-focused 14 oz store in Berlin, noted that the Netherlands “has a unique view of the world and always with an open mind. It is a little country that brings huge standout brands such as G-Star and Scotch & Soda.” He cited the Elwood jean by G-Star as “the most masculine pair of jeans ever,” helping to elevate the brand to Holland’s “most popular urban fashion label…defined by its raw denim and vintage military styling” but “always reinventing itself while remaining true to its original denim philosophy.”

Scotch & Soda, he added, has grown to 7,000 points of sale globally, with 90 of its own stores worldwide and an integrated e-commerce site, blog and social media presence.

Gsus Industries is a young brand that’s built its name on innovation, including glow-in-the-dark jeans that don’t use reflective tape and “aloe vera jeans” before the big brands tried them.

“The basis of everything we do is made by instinct,” said Jan Schrijver, founder and creative director. “This philosophy is born from our intuitive, free-spirited roots and free associations.”

He views the enterprise as a fusing of right-brained and left-brained individuals working with dynamic tension but in harmony at the same time.

Kuyichi has established itself as one of the pioneers in the use of organic cotton and played a somewhat oversize role in the advocacy of the use of sustainable practices in denim manufacturing. “Since 2000 we have been on a journey, and for the past 12 years we have innovated and inspired,” said Leo Cantagalli, ceo of the company.

Steve Te Pas was among the founders of Amsterdam Fashion Week and heavily involved in the distribution of Evisu jeans. Now he’s founded Good Genes, a contemporary collection of jeans and casualwear, including tops, jackets and coats, as well as luxury suits for men and women. The collection is made in Italy and features denim from Japan and Peruvian knitwear made from baby alpaca.

“I came up with the term ‘new luxury,’ which is somewhere between high-end denim and a luxury collection — classic, no logos and very understated,” said Te Pas.

“We even take it a step further by treating part of our [Kings of Laundry] collection with ozone and lasers instead of water,” said Tony Tonnaer, ceo and creative direction of KOI, which is a member of the Fairwear Foundation, a nonprofit organization that promotes improved working conditions for garment workers.

Many who work in Holland say that the corporate environment does not get in the way of creativity. Lilian Driessen, owner and design director of Maria Lux, served as design director for Diesel Black Gold in Italy but, like Cruden, yearned for her homeland, where she began her career.

“I moved back to Holland years ago because I wanted the freedom from corporate restriction and [as a mother] combining fashion with motherhood is nearly impossible anywhere else in the world,” Driessen said.

A veteran of work with Viktor & Rolf and Alexander van Slobbe, she said she appreciates Holland’s scale as well as its global outlook. “In Holland we don’t have rich people who buy expensive clothes. Our country is too small, so we have to focus on the world,” said Driessen about her luxury collection.

Cruden has built a multifaceted business, including not only C. Cruden but also a shop called Lab, where she tests new products before offering them at wholesale. Among her ideas was the model CO1, which fits men and women, can be sized up or down by adjusting a button on the waistband, is made in Japan and retails for 289 euros, or $378.

“As a small company, I have to find new ways to achieve what I want, which is to offer a high-quality denim for a reasonable price,” she said.