A fashion show at Avalon.

A shaded pocket park with tables and chairs. A plaza activated with community events and amenities. An urban trail that runs through the development. These are the green spaces between the buildings. They generate nothing in revenue, yet they are the lifeblood of retail real estate.

Studies have shown that when a property is anchored by a park or open space, its value significantly increases by up to 40 percent. In The Case for Open Space: Why the Real Estate Industry Should Invest in Parks and Open Spaces, Urban Land Institute found that investing in green space leads to increased traffic for retail tenants as well as greater public support and faster zoning approvals.

Despite the data, most REITs and privately owned real estate companies fail to see the value in these non-revenue generating spaces. Instead, they invest time and money in adding peripheral uses and negotiating cheaper rents with experiential tenants such as Dave & Buster’s. 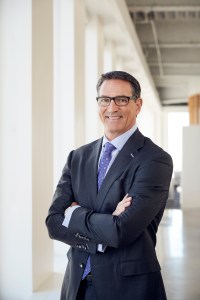 A report by Thasos found that experiential tenants have not been driving foot traffic to malls like many mall owners expected, suggesting a flaw in the leasing strategy. Plugging cool new tenants into vacant spaces may have worked before e-commerce, but today, it’s a bandage approach to a situation that requires radical surgery.

Adding new uses, such as hotels, apartments or office space, to out-parcels or empty department store anchors sounds good in theory and may slightly move the needle in foot traffic. It’s not enough to significantly impact the bottom line and meet increasingly high consumer standards because this development approach fails to create an exceptional guest experience and community gathering place.

Everyone in retail real estate is competing for the consumer’s time. And consumers are choosing to spend time ordering products online from the comfort of their homes, offices, etc., or they are leisurely visiting highly curated, well-designed environments with activated greenspaces that attract other people and inspire community gathering. In addition to the obvious health benefits of spending time outside, these green spaces become a platform for meaningful human experiences in real life — a scarcity in today’s digitally driven world.

A traditional mall with a hotel in the parking lot or coworking concept in a former Sears is not the answer. Pieced together like Frankenstein’s monster, without love or care for the human experience, these mall redevelopments will, too, be rejected by consumers.

At Colony Square in Midtown Atlanta, we scrapped the traditional bandage approach and tore down the 175,000-square-foot mall. We are replacing it — the most valuable piece of real estate — with a 15,000-square-foot plaza with an indoor/outdoor stage, soft seating and roster of community events. By May 2020, the plaza will be surrounded with street-level retail, restaurant and entertainment concepts, including a food hall called Main & Main and luxury dine-in theater IPIC. We’re also activating smaller greenspaces around Colony Square, such as The Grove, an urban pocket park that just opened to the public with great fanfare. Until now, this space sat underutilized for 50 years at one of the most trafficked intersections in Atlanta.

At Avalon, a $1 billion mixed-use project in Alpharetta, Ga., we built the development from the ground up and placed the concierge and plaza at the heart of the property, which again, is the most valuable piece of real estate. We expanded the original plans for the plaza and cut into a leasable area in order to accommodate a 10,000-square-foot ice skating rink during the winter months. Throughout Avalon, we invested the most money into creating a walkable, street-level experience, everything that falls 16 feet and below.

In 2017, Avalon broke the record for being the largest single asset transaction in Metro Atlanta. Avalon’s multifamily and office components command rents 40 percent above market. Single-family homes sell 100 percent above market. Hotel room rates are 50 percent above market. And, despite the turbulent retail industry, Avalon’s retail component is 98 percent leased and the restaurants and stores consistently rank as top performers in the region. And, Avalon’s second-generation retail space is leasing at two-times original rental rates. We attribute Avalon’s success to its highly programmed public realm.

At Edge on the BeltLine, we oriented the mixed-use development so that it would straddle the Atlanta Beltline, an incredibly popular 22-mile urban trail. With 350 apartments, street-level retailers and restaurants and a 90-by-90-foot art mural, Edge commands above-market rents and recently welcomed A-plus tenants like Shake Shack and Cold Beer, a beer garden and restaurant by chef Kevin Gillespie. 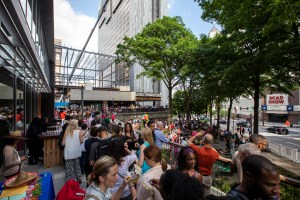 Designing and building community greenspace is only half of the equation. Landlords must also spend money on marketing and programming of these open areas. Our team doubled our post-recession marketing budget and added a new line item to leases called the “Experience Fee.” Both office tenants and retailers pay an Experience Fee of $1 per square foot because they understand the value of experiential marketing.

The Experience Fee contributes to our ability to host 200-plus annual events at Avalon that attract thousands and activate the spaces between the buildings from morning to night, weekday to weekend. At Colony Square, we brought our event program skyward to a helipad in order to engage our community throughout reconstruction.

We give our marketing team — a creative group of people we call ExperienceMakersä — a prominent seat at the table through every stage of development because they bring a unique and valuable perspective on creating exceptional guest experiences. Because we make community programming and the public realm top priorities in our development strategy, our projects emerge as authentic gathering places that pulse with human energy and attract best-in-class retailers, therefore driving value for all other real estate uses.

Mark Toro is a partner at North American Properties.