As 2018 comes to a close, one thing is becoming ever-more apparent: 2019 will be the year of chat marketing.

Everyone from iconic retailers such as Saks Fifth Avenue and Sally Beauty to global brands like Cole Haan and Kenneth Cole, to hot digital-native brands such as Carbon38, Wander Beauty, Ouai Haircare and Hot Topic are leveraging Messenger as a channel for making sales and connecting with customers. But as with any major new channel, while innovators are out ahead reaping the early mover advantages, most marketers remain relatively clueless toward Messenger’s vast functionalities, spanning marketing, sales and customer care. Here is the first of a two-part basic primer on Facebook Messenger’s use as a retail channel, so you can begin unlocking its powerful capabilities for your brand.

What are Messenger Bots?

Most of the innovation in marketing on Messenger centers around Messenger bots.

What’s a Messenger bot? Put simply, when a brand’s Facebook page has been configured for automated messaging instead of having human agents sitting and responding. The user is experiencing an automated “conversation.” But don’t make assumptions: after 12-plus months of testing effective Messenger bots, we know that the best bots are those that don’t pretend to be human; rather, they are overtly automated experiences with a particular goal — whether it’s to provide product recommendations like Wander Beauty’s, gifting assistance like Saks Fifth Avenue’s, or FAQs and a store locator like Sally Beauty’s. 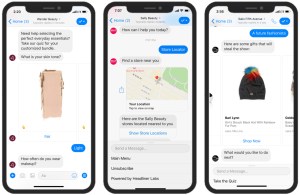 When it comes to Messenger bots, the aim is not to trick users into thinking they are talking to a human. Rather, it is to provide them with an incredibly fast, interactive communication that offers them something they want, whether it’s information, a discount or a helpful reminder.

At the top of the funnel, Messenger is an increasingly important channel for finding new customers. Many brands are leveraging Facebook’s Messenger-specific ad units to find new customers, and in particular, newer click-to-Messenger ads. The key distinction between this and other Facebook ads is that a click on this ad leads directly to a conversation between the person and the company in Facebook Messenger — i.e., the same as if the person went to the company’s Facebook page and hit “Send a Message.” What’s more, there is a Messenger bot there ready to engage the user in a “conversation.” 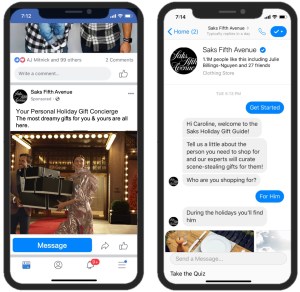 So how are these ads performing? It varies.

According to Ryan Maynard, chief executive officer of ChatDynamo, a leading digital marketing agency specializing in click-to-Messenger ads, data shows that the average cost per new bot user tends to be in the range of $1.50 to $3.25.

Generally, according to Maynard, the best way to evaluate these campaigns is by looking at the cost per unique link click. When assessed by that metric specifically, click-to-Messenger ads can prove to be both cost-effective and lucrative.

Here are some of Maynard’s top tips for further optimizing click-to-Messenger campaigns:

Should ad copy always include a question? Ads that feature an engaging question are twice as likely to have people click-through to engage with their bots. For example, during a recent campaign with a large apparel brand, Maynard greeted customers with the question, “What’s your gym look: T-shirt or tank top?”

GIFs are great for clicks. Click-to-Messenger ads featuring animated GIFs can average as high as 10 percent click-through rates, which is considerably higher than the 0.5 percent to 2 percent average click-through rate that Maynard has seen for click-to-Messenger campaigns in general. This is a big boost, although it’s worth noting that those clicks don’t always translate to engagement.

Use buttons and emojis inside the bot. Once a user has clicked through from ad to bot, it is optimal to present users with button-based responses instead of asking them to type. This streamlines the work a user has to do to engage with the conversational experience. The buttons also can link back to your site, and they perform best when there are two buttons offering options — “Shop Now” and “Learn More,” for example — even if they both link to the same landing page. And definitely, use emojis for 6 percent to 10 percent or more higher click rates.

Avoid Costly Instagram Inventory. Facebook newsfeed and Messenger inbox click-to-Messenger placements drive lower costs (often two to three times lower) than Instagram placements. While every marketer is familiar with newsfeed ads, Messenger inbox ads are newer and far less utilized than newsfeed ads. They are similar to traditional Newsfeed ads, but live inside of a person’s Messenger inbox. As a user scrolls down through their inbox, the ad will appear with a call to action that can open a bot or direct the person to a landing page. 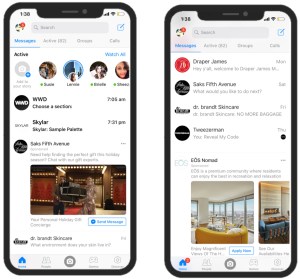 As brands recover from the frenetic holiday season, they should be carefully crafting their digital strategy for the new year. Having a keen understanding of the ways in which Facebook’s Messenger-specific ads can be deployed for different objectives is essential as overall usage of Messenger continues to skyrocket. This primer will help.

Stay tuned for Part 2 of our primer, which will discuss the astounding sales conversions that can be achieved by using Messenger to deliver ongoing automated marketing campaigns, like abandoned cart, abandoned browse, win back and replenishment campaigns.

Dana Gibber and Caroline Klatt are cofounders of Headliner Labs.