This U.S. Mill Cites Alpaca as ‘Key Part of Future’

Jacob Long, chief executive officer at A.W.C., said the company “believes in American made and is expanding its homegrown and woven fabrics,” adding that the mill already sources wool from Chargeurs, a U.S. fiber pool, and fine merino from the Helle Rambouillet ranch in Montana. “A century ago, sheep grazed on New England pastures. Today, some of that land is used to raise alpaca. As a modern New England mill, we see alpaca as a key part of our future.”

Alpaca’s light, feathery-feel, softness and adaptability to dyeing and weaving has made it a favorite among fashion brands, in addition to its natural range of 22 colors that eliminates the need to dye it. But brands — and consumers — are choosing alpaca for its most basic characteristics: It is hypoallergenic, water-resistant, temperature controlled, biodegradable, antimicrobial, breathable, lightweight and obtained annually through “ecological and ethically sound practices,” according to the trade commission of Peru in New York. 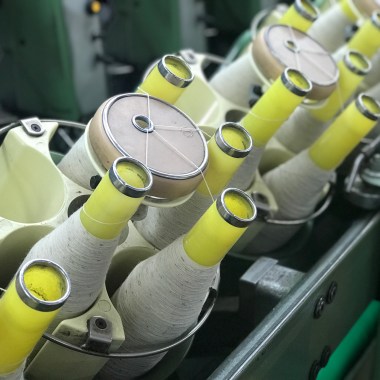 Once considered the “gold of the Andes” and worn by Incan royalty, alpaca has become known today as a sustainable fiber and a sound alternative to fur animal hides. Though 80 percent of the global alpaca fiber production takes place in Peru, A.W.C. sources its raw alpaca fiber from Black Forest Alpacas in Gregory, S.D. — the company confirmed that it has received a shipment of 1,000 pounds of fine white 21 micron alpaca and that at least two developments are planned for the coming seasons, both of which are in the natural alpaca colorways and can be used across apparel and interiors, the company said.

Giuseppe Monteleone, director of operations, produced the mill’s first alpaca yarns, according to A.W.C. “Chris Riley of the New England Alpaca Fiber Pool sent us a coarse fiber to test — 26 to 29 microns — but asked for a smooth single 10- and a 17-metric yarn,” Monteleone said. Commenting on the modernity of the mill and need for specific technologies to create such a product, “I knew from my experience with other royal fibers that the settings of the machines are crucial. You must have the right speed and tension during carding to achieve an even yarn,” Monteleone noted.

At the Source: Peruvian Manufacturing in Focus

Google Moves Sustainability Needle With ‘Your Plan, Your Planet’