The plan is to have designers create garments based on the characteristics of different types of wool versus vice versa.

A weaver at work on the Connecticut-sourced project.

While most of the world is retrenching in the aftermath of the coronavirus crisis, Till is launching a wool ecosystem in Connecticut to develop a collection of wool apparel.

The New York-based designer William Calvert has joined the Connecticut-rooted effort as chief creative officer and is overseeing the design of prototypes for core garments. Till bFt (bioFashiontech) aims to create a localized approach to fashion where designers create products that are based on the characteristics of the wool versus presenting a design first and using that as a starting point. Border Leicester and Texel are two examples of the types of sheep that will provide the wool.

With a network that is adhering to Connecticut’s shelter-in-place edict, farmers, weavers, sewers, pattern makers and designers are each working on their piece of mole production. The goal is to partner designers with specific farmers to understand what would be the most suitable breed-specific designs. Till’s founder Jane Philbrick said, “These will be fiber-driven, place-driven garments. This also speaks to the urgency of having people wear clothes that reflect the health of our communities and of our ecology.”

Through her teaching in the art, media and technology department at The New School’s Parsons School of Design, she has seen how keen young designers are to create locally sourced, environmentally sound products. She also spoke of the need to chip away at the statistic that only three percent of the clothes worn in America are made in America.

Freestyle Fibers Farm and Six Paca Farm — which are in Bozrah, Conn.; Siegmund Family Farm In North Grosvenordale; Cold Goats Farm In Haddam, and Heddle Over Heels In Southbury are among the links in the supply chain currently. The focus is on wool that is locally sourced from grass-fed sheep. The Connecticut chapter of Fibershed is another key resource, Philbrick said. 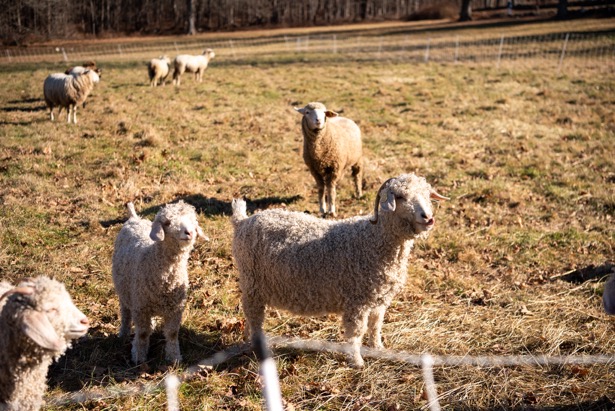 Having met on March 11 with George Krivda, the U.S. Department of Agriculture’s state director for Connecticut, Massachusetts and Rhode Island, Philbrick said further talks and research are planned, including a feasibility study that is being funded by the Thames River Innovation Place, an alliance of private, public and nonprofit groups in Connecticut. Over time, the aim is to create a hub in New London where participants could tap into the bioscience brain power and materials. Philbrick also hopes to utilize some of the many engineers in the area, when they are not working at their day jobs. The Naval Submarine Base New London is a major employer in the city.

The first Till bFt collection will be sold in August in a pop-up shop in the Hamptons, and others are planned for New York City, Boston and Washington, D.C. Till expects to secure a retail outpost, a zero-waste facility and zero-waste restaurant in September that would open in October. Post COVID-19, Philbrick said such operations may require curbside pick-up, a laundromat or other safety precautions.

From her point of view, there is room in the retail landscape for such a hyper-local approach. Department stores were already in trouble before the pandemic, because “they were selling generic garments that have nothing to do with local cultures — and in stores that aren’t that pleasant to be in,” she said. “It’s really about being part of the culture of a garment and understanding that the culture is systematic.”

Noting how Australia’s wool farming has been hampered by wildfires, Philbrick also pointed to challenges in the U.S. California and Wyoming are the leading U.S. resources for wool, followed by Colorado and Utah tied for second and Texas in third place, Philbrick said. But California’s wildfires, drying conditions in the inter-mountainous regions and droughts in Texas have affected production. Sheep farms in the Northeast have sufficient rain, more nutritious grass and clay in their soil to retain water, she said. “We have had 50 years of disinvestment but we are looking to fortify resources for sheep farms in New England farms and really optimize the channels of our wool. We’re not looking to become a mono-culture wool economy like Australia. That is a 20th-century model,” she said.

The focus on Connecticut is reflective of the state’s history in wool production. In 1802, the first flock of merino sheep arrived in the U.S. in Derby, Conn., brought by the enterprising diplomat and future sheep farmer David Humphrey. Of the 18 operating mills in the U.S., there are only eight that are of industrial scale, with American Woolen outside of Hartford being one of them, she said.

The collection’s name, “Wild Things,” is a wink at the late children’s book author Maurice Sendak, who lived in Ridgefield, Conn. After deciding on that moniker, Philbrick later learned that Sendak’s foundation supports an annual fiber festival in upstate New York.