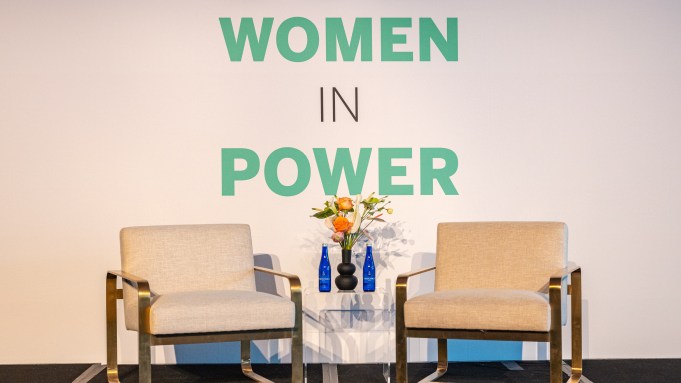 Amanda Smith, president of FMG, opened the event by recognizing those on this year’s Women in Power list and inviting all in attendance to participate in a very real dialogue about what women leaders can do to help one another and what workplaces must do to facilitate opportunity. Notably, a topic of conversation arose during the day behind the “power of women,” with many expressing how important it is for women in leadership roles to help lift others around them and recognizing the power they have to do this.

“Power, to me, means making space for all of us to win,” Jessica Alba, founder of The Honest Company, said at the event.

Alba was one of several honorees on the 2022 50 Women in Power list who took the stage, others included Lululemon’s Sun Choe and The Estée Lauder Companies’ Tracey T. Travis.

After a difficult few years, which highlighted significant challenges for women in the workforce, there was no shortage of topics to be discussed. In addition to Alba, Choe and Travis, female executives from Google, Dyson, Bergdorf Goodman, Parade, Allbirds, Able Partners and Nude Barre participated in on-stage discussions on everything from speaking truth to change, achieving accountability, driving cultural change, creating impact and how to support the next generation of female leaders.

Following these conversations, guests gathered for a Unilever-sponsored “power lunch” of networking and debriefing on the topic at hand and what power means.

Sherri McMullen, founder and chief executive officer of McMullen, told WWD that power means “empowering yourself to live your life truthfully and also empowering others to make sure they can sustain and have opportunities to be their best selves as well.”

“Power means figuring out how to amplify and impact outside of the individual, so how can we share what we’ve learned with other people in the industry to drive more progress, faster?” said Hana Kajimura, head of sustainability at Allbirds.

“What power means to me is freedom, independence, confidence and really feeling and being empowered internally,” Elizabeth A. Morrison, chief diversity, equity and inclusion officer at Levi Strauss Co. and one of this year’s 50 Women in Power, said in an interview for the Women in Power list. “What is that source of resilience, that source of energy and passion that I have, and how do I harness that to make the difference I want to see in the world?”

“Power for me is using your experiences and your knowledge to have an influence for either the pace of change or a disruption and using those experiences for the things you don’t want to do but also the things that you can influence and change for the better,” said Peggy Elsrode, president, Americas at Dyson.