The genesis of the surf and skate movement goes back to the early Seventies in Los Angeles. But it was in the early Eighties when surfboard maker Shawn Stussy put his brand name on T-shirts and hats that the movement gained momentum in apparel.

Today, the trend is known as streetwear and it’s a $309 billion industry that is impacting the global fashion and luxury apparel market, according to a new report from Trendalytics.

“Streetwear is hardly a new concept,” authors of the report said. “What began as a social movement in the 1970s, has become an evolving subculture for nearly 50 years. While the aesthetic is made up of T-shirts, baseball caps, hoodies and sneakers, streetwear is about so much more than just the clothing: it’s a lifestyle.”

Researchers at the firm describe streetwear as being anchored by “the artists, musicians, DJs and designers who have helped bring the look to life.” They noted that the trend was “born on the shores of California,” but “infiltrated various locations, eventually making its way to the streets of New York City, across Europe’s borders, and throughout Japan.” Analysts at Trendalytics said streetwear as a social movement has “had a universal impact on art, home decor, music, linguistics and further proved itself as a retail force to be reckoned with.”

The report concluded that streetwear’s impact on the luxury segment in particular “cannot be understated.” Analysts at Trendalytics said luxury brands have responded to the popularity of streetwear by shifting product offerings and taking on new designers. “The appointment of designers that understand the younger cohorts is the clearest attempt by luxury to earn streetwear cred,” the authors said.

Social media also plays a key role in the trend, which continues to evolve as consumers gravitate to various influencers. “While top celebrities like Zayn Malik, The Weeknd and Ansel Elgort garner the highest total social post engagement from their branded posts, top influencers gaining social buzz include Laura Enever, Kelly Slater and Surfline, each capturing more than 10 times the engagement per mentioned post than Kanye West,” the report stated.

With brands, well-known ones such as Adidas, Puma and Fila have captured the greatest total social engagement from celebrity and influencer mentions. Trendalytics also said there’s been a steep increase in collaborations, which include Adidas’ “Calling All Creators” campaign and “Puma’s partnership with everyone: Rihanna on Fenty x Puma, MAC, the Weeknd and even Sonic the Hedgehog.” With Fila, the brand has partnered with Gosha Rubchinskiy, Urban Outfitters and Fendi.

Analysts at the firm also identified some subsegments of the streetwear trend, which include its own set of subtrends, notable brands and influencers. These include: surfer, skater, punk and hip-hop. The firm revealed a “streetwear ecosystem” that showcased the top brands (Carhartt, Noah, Thrasher, etc.), shops (Flight Club, Kith, Stadium Goods, etc.), players (Abloh, West, Malik, etc.) and “juggernauts” (Vans, Supreme, Stussy, etc.). 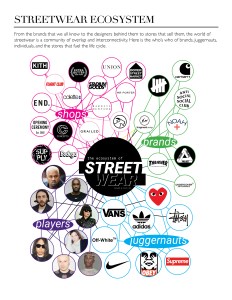 Regarding the history of streetwear, Trendalytics identified other “founding fathers” aside from Stussy. “Hiroshi Fujiwara, referred to as the ‘godfather of streetwear,’ is attributed with bringing Japanese fashion to life in the Eighties,” the report stated. “Fujiwara launched his own streetwear line, Goodenough, in 1990, and served as a mentor to another vital founder, Nigo. Nigo created the infamous brand, A Bathing Ape (also known as Bape), which influenced many of hip-hop’s key players, like Pharrell Williams and Kanye West.”

After Bape, the next milestone in the trend was from James Jebbia, “the mastermind behind Supreme, which opened its doors in 1994.” Analysts said at the same time Supreme bolstered the skate community, “hip-hop began to make its streetwear contribution. Rappers and record labels popularized baggy jeans, snapbacks, puffer jackets and had a strong following in urban communities.”

By the late Nineties, Trendalytics said the rise of Silicon Valley began to fuel “the flame that streetwear ignited throughout the U.S.”

“The immediacy of the Internet allowed trends and brands to spread their influence at a much faster pace,” authors of the report said. “Society was experiencing a shift; business attire disappeared and casual Fridays morphed into casual every day. Today, streetwear is more mainstream than ever before, with hoodies and T-shirts existing as a staple in every wardrobe, and offerings ranging from budget-conscious to luxurious. The forefathers of streetwear continue to influence its evolution along with relative newcomers, such as Ronnie Fieg and Nick Lenzini, as the world becomes ever more connected.”