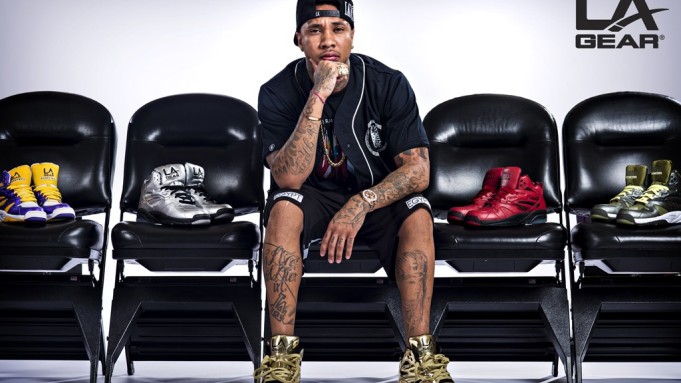 Tyga is on the prowl.

On Monday, the hip-hop artist and style influencer teased four photos of himself wearing four different pairs of new L.A. Gear sneakers. “Coming soon,” he wrote, which had his five million fans wondering if the famed Nineties sneaker brand was making a comeback.

The answer is “yes.” WWD has confirmed that the Los Angeles-based company will relaunch in the spring and the first style will be part of the “Originals” collection and be designed by Tyga, the brand’s newest creative brand adviser. The styles will retail for $120 and launch with a gold shoe, the L.A. Gear Lights Liquid Gold, in conjunction with the 24-year-old’s forthcoming album, “The Gold Album: 18th Dynasty,” executive-produced by Kanye West.

“L.A. Gear is iconic and represents a mind-set I relate to,” Tyga told WWD. “I wanted to do something different, take my own path. Instead of doing a deal with an active brand in the market, I wanted to be part of something that felt original to me.”

The brand launched in 1983 on Los Angeles’ Melrose Avenue, and was best known for its blinking L.A. Gear Lights, Hollywoods, L.A. Tech Runners and KAJ. The brand hit its peak in the Nineties with brand ambassadors such as Michael Jackson, Kareem Abdul-Jabbar, Wayne Gretzky and Joe Montana, among others.

Though market share dwindled in the shadows of other sneaker brands, it has never ceased production, a company spokeswoman said. With the relaunch, the firm will target megabrands Jordan, Nike, Adidas and Reebok as its main competitors, the spokeswoman said.

“Our loyal customers and sneaker collectors have been consistently buying out our existing L.A. Gear Originals inventory,” said Lance Jackson, L.A. Gear’s vice president. “With the blending of vintage and modern style so on-trend right now, it is the perfect time to remind everyone of the L.A. Gear Originals line while adding a fully updated and modern edge to each shoe design and to the overall brand.”

With Tyga — who also worked with Reebok on launching his T-Raww sneakers — the brand hopes to make a mark in the streetwear market.

“It made perfect sense to collaborate with Tyga, who is on the forefront of both music and fashion, to bring a fresh perspective to a brand that was born so many years ago with fashion at its core,” said Jackson.

The brand plans to launch other styles throughout the year, including the T-Raww sneaker line, which is no longer associated with Reebok. It is taking appointments with buyers and plans to sell via specialty sneaker stores, major retailers, on L.A. Gear’s new Web site, lagearoriginals.com and its own phone app.