Economic impacts on the hotel industry is already more severe than the 9/11 and 2008 recessions combined, according to the AHLA.

The travel industry is in crisis due to devastating impacts from the coronavirus.

Due to coronavirus, what was once at the top of the proverbial “to-do” list has made its way down to the bottom: travel.

The American Hotel and Lodging Association, the nation’s largest trade association for the hotel industry, has projected a 3.9 million job loss for the industry with the current pace of occupancy decline for the year. This economic impact is already more severe than the 9/11 and 2008 recessions combined, they said.

According to the AHLA, so far the coronavirus pandemic has been “catastrophic.” Based on current occupancy estimates, AHLA said “four million total jobs have been eliminated already or are on the verge of being lost in the next few weeks,” and that “in certain affected markets, including Seattle, San Francisco, Austin and Boston, hotel occupancy rates are already down below 20 percent and individual hotels and major operators have already shut down operations.”

To help alleviate these impacts, earlier this week top hotel ceos met with President Trump and Vice President Pence to discuss urgent assistance solutions – but for many hotels, it might already be too late. Several U.S. hotel industry ceos were in attendance, from companies such as Best Western, Choice Hotels, Hilton, Hyatt, InterContinental Hotels Group, Marriott, MGM, Pebblebrook, Universal and The Walt Disney Co.

At the meeting, attendees suggested several immediate actions the White House and Congress could take to help the industry protect jobs and help small business operators, AHLA said. “The group focused on two critical goals — retaining and rehiring employees and keeping hotels from shutting down through access to liquidity and low interest loans, including for small businesses,” they explained. Participants in the meeting were hopeful that President Trump and Members of Congress will find a tenable solution, urgently, to position the industry to rebound from coronavirus impacts, all according to AHLA.

In addition to major hotel brands, the coronavirus pandemic hit hard for approximately 33,000 small business owners who operate 66 percent of hotel properties across the country. The impact has been so severe that many are considering closing their doors for good within days, AHLA said. And, the speedy pace of booking cancellations is having an “immediate, negative ripple effect” on small hotels, employees and community businesses. 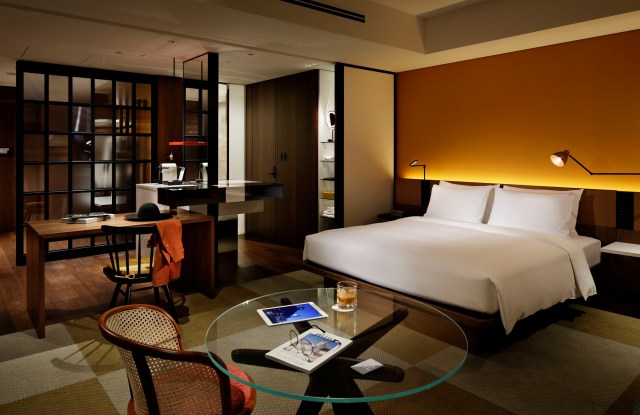 “This unprecedented public health crisis has quickly become a catastrophic economic crisis as well,” said Roger Dow, president and chief executive officer of the U.S. Travel Association. “The losses for the travel industry alone are projected to double the unemployment rate over the next two months and plunge the country into recession. Small businesses, which make up 83 percent of travel businesses, need relief right now if they’re going to be able to keep paying their employees.”

And Chip Rogers, AHLA president and ceo, said “the burgeoning COVID-19 health crisis is unprecedented in its size and scope, and it represents the single largest decline in travel in modern times.”

“The impact to our industry is already more severe than anything we’ve seen before, including September 11th and the great recession of 2008 combined. The White House and Congress can take urgent action to protect countless jobs, provide relief to our dedicated and hardworking employees, and ensure that our small business operators and franchise owners — who represent more than half of hotels in the country — can keep their doors open,” Rogers said.

A 30 percent decline in hotel guest occupancy could result in the loss of nearly four million jobs, with $180 billion of wages and a $300 billion blow to the gross domestic product, according to an Oxford Economic Study. Those circumstances would cripple the hotel industry, the communities they serve and the U.S. economy, AHLA said. The hotel industry supports one in 25 American jobs, totaling 8.3 million jobs, more than $97 billion in wages and salary income, and contributes nearly $660 billion to the U.S. GDP annually, authors of the report stated.

Hilton president and ceo, Christopher J. Nassetta said, “In Hilton’s 100-year history, we have never seen anything like the current situation. I am hearing directly from hotel employees concerned about their mortgage payments and hotel owners worried about making payroll.”

Nassetta explained, “Nearly 80 percent of the hotels in our U.S. network are franchise properties that employ less than 50 people, and we are using every tool in our toolkit to keep these small businesses viable. Ours is an industry of people serving people, and that’s why we’re asking Congress and the administration to help shield them from the economic impact of the coronavirus, so they can be part of the recovery that will follow.”

InterContinental Hotels Group Americas ceo Elie Maalouf said the coronavirus represents “a global economic emergency as well as a global health emergency, and the impact it will have on the hospitality industry is unprecedented.” Maalouf added, “Even as we’re currently managing this issue to keep our guests and colleagues safe, and hotel owners secure, we’re committed to doing everything we can to protect the future of the millions of Americans employed by the hotel industry and prepare to expedite a return to normal once this crisis passes. We appreciate the administration’s engagement in this issue and look forward to continuing this important discussion in the weeks ahead.”