Protesters during a demonstration to show their support with China's Uighurs in Amsterdam.

At first, it reads like a global Fortune 500 companies roll call: Apple, BMW, Gap, Huawei, Nike, Adidas, Samsung, Sony and Volkswagen, only that it’s a list of the companies to have been linked to forced Uighur labor in Chinese factories.

At least 83 well-known global brands in the clothing, technology and automotive sectors from 16 different countries were linked to the practice, as identified in an Australian Strategic Policy Institute report that came out over the weekend, “Uighurs for Sale.”

In it, the think tank details how re-education, forced labor and surveillance of Uighurs — something that had been extensively documented within the borders of the region — also extend far beyond Xinjiang into factories all across China with authorities forcibly relocating people from their homes and advertising their labor at no or little cost. The ASPI report estimates that over 80,000 Uighur workers were transferred out of Xinjiang between 2017 and 2019 to perform coerced labor.

In 2018, the United Nations said it had credible grounds to believe that one million Uighurs are being held in camps in Xinjiang but China counters that its activities are part of the effort against terrorism and religious extremism and even offer vocational education in the Far-Western territory.

WWD talked to Nathan Ruser, a co-author of the report and researcher at ASPI to go over the findings, including why traditional auditing has missed these labor issues and how the ongoing coronavirus outbreak may put even more Uighurs at risk. 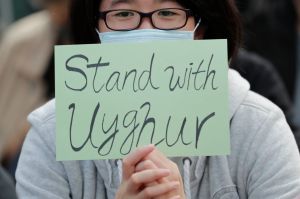 A person holds a sign during a rally to show support for Uighurs and their fight for human rights, Hong Kong.  Lee Jin-man/AP/Shutterstock

WWD: What sort of history does forced Uighur work have in China?

Nathan Ruser: The general idea of Uighurs transferred to do work in factories around mainland China has been around for a while, building in the 2000’s and it peaked in 2009 and 2010 after the Urumqi riots. After that, it dropped quite rapidly because most mainland China companies didn’t really want to use Uighur labor because they were scared of them after that violence. There was a big drop in the number and now it’s really picked up again.

N.R.: What’s different now is that it’s part and parcel of this policy of forced assimilation. There have been efforts by the Chinese state to repress Uighur culture and Muslim beliefs for decades but since 2017 they’ve taken a much more proactive role in this.

There’s also the element of the general manufacturing labor force which is growing less and less happy about their wage growth growing slower than the general economic growth of China. Since 2005 and especially following, there were a lot of labor rights protests. A lot of those demands from the workers have been asking officials to give them wages which are more in line with GDP growth.

By bringing workers from Xinjiang under threat of arrest, the companies are guaranteed a labor force immune to any sort of labor rights. The companies that broker this Uighur labor advertise that the workers are used to working in adversity, that they will stay the length of the contract. They will go where you need them to go and anecdotal evidence shows that if any of them protest, they get either sent to or back to re-education camps.

WWD: China has previously defended the structures it has been building in Xinjiang, which satellite imagery shows is growing at rapid pace, as vocational centers that offer worker training. Is this labor program part of a move to demonstrate they are giving workers skills?

N.R.: I don’t think it’s what drives the policy. There’s certainly an effort to cash in on those visuals but countering that point that the detention and transfers are to educate people, we’ve seen time and time again that the people that are detained in Xinjiang are a really broad sector of society.

They’re not the poor people. They’re not the people that are unemployed. They are anyone that could show a normal expression of faith or identity. People who have been retrained to do these blue collar jobs are in many cases people who used to be teachers or nurses. They weren’t in need of poverty alleviation.

This also isn’t replacing the detention. We can see from satellite imagery that there are still hundreds of camps that are active and expanding and growing through 2019. The largest camp in all of Xinjiang which used to stretch 2 km long in 2019 has now grown by half and is now 3 km long.

WWD: How much responsibility lies with the factories themselves? Are they too just following directives from the authorities?

N.R.: There’s not so much coercive policies used but more incentives. Each worker taken from Xinjiang brings with it a heavy government subsidy.

Some advertisements say there’s no labor costs and others advertise that the workers get paid monthly. But it’s unclear how much of that is paid out since workers need to pay for their dorm and food at the factory. There’s no solid information actually what the Uighur workers get to take home at the end of the month.

One advertisement said the advantages of Xinjiang labor are “semi-military style management, can withstand hardship, no loss of personnel, minimum order 100 workers.” That’s really striking along with the ways that there’s so much surveillance for the camps. There must be a dedicated employee to every 50 workers to manage them. They are monitored on their phones and through WeChat. They get a little addition to their ID cards that stops them from going through checkpoints or moving anywhere.

What’s important to take home if you’re not familiar with the Xinjiang situation, is that it’s an absolute hell bent effort to remove any notions of identity or faith or culture from this group of 10 million people in China and that it’s being done through the contamination of an ethical supply chain in Western companies in a way that isn’t caught up in auditing methods.

WWD: Why is it that this isn’t being flagged in supply chain auditing?

N.R.: The overall awareness of Uighur labor as an issue has only come up in the last four to five months. I don’t think an auditor would see anything out of the ordinary if you went there when you talk to workers. There’s always a government minder with you.

Another thing to keep in mind is that these factories aren’t tier one suppliers, these are the tier two and three suppliers.

WWD: Some of the companies responded to the report findings, what do you make of those answers?

N.R.: The Adidas one is interesting because they said they don’t have a relationship with one of the factories [Haoyuanpeng Garment Group] so it’s not a tier one manufacturer. But you can see from satellite imagery the Adidas logo is on the factory site. It seems to be the front of the factory where they list out their strategic partners. It has the Adidas, Semir and Fila logos and behind that you see the residential dorms are fenced off from the factory. You can see the Adidas logo from space.

But as a whole I don’t think many understand the mechanisms with which this labor force gets inserted into their supply chain. It took us three months to put together this research. It’s not something you could just come to intuitively by talking to officials in the regions and talking to those companies. But there is beginning to be more of an understanding that this is an issue.

WWD: What sort of change do you hope will result from this report?

N.R.: The timing of this report is really important — you’re at a crossroads where a lot of companies are reconsidering their strategic relationship with China with the trade war, with the coronavirus and with how tainted that supply chain can become.

It’s not included in the report since there had to be a cut-off time which was prior to the virus outbreak but we have seen photos and reports of people being sent from Xinjiang to provinces that are really impacted by the coronavirus. [A Feb. 27 Radio Free Asia report said that hundreds of Xinjiang workers had been transferred to Hunan, Jiangsu, Jiangxi and Zhejiang.]

I think that goes to show how much in these labor transfer programs that Uighur workers aren’t really seen as people but reduced to the economic value they can add to a company. While so much of the rest of China has locked down and tucked in, the indication is that these Uighur transfers are continuing as if nothing had changed.

With China wanting very aggressively to reboot the economy in a meaningful way, it’s not hard to imagine circumstances where they do rely increasingly on this forced Xinjiang labor transfer to restart manufacturing in factories that have been shut down.

Haoyuanpeng Garment Group: Haoyuanpeng’s web site says customers include Adidas, Fila, Nike and Puma. Adidas says it has no direct relationship with HYP and are investigating their use of their brand name and logo.

Forced labor transfers also occur within Xinjiang itself and among those, major textile players including factories owned by Shandong Ruyi and Esquel Group have been identified as using such workers.