The hopes that some stability had come may be quickly fading in Brazil.

By Samantha Conti and Laure Guilbault and Adriana Brasileiro
with contributions from Catherine Blanchard
on July 19, 2013
View Slideshow 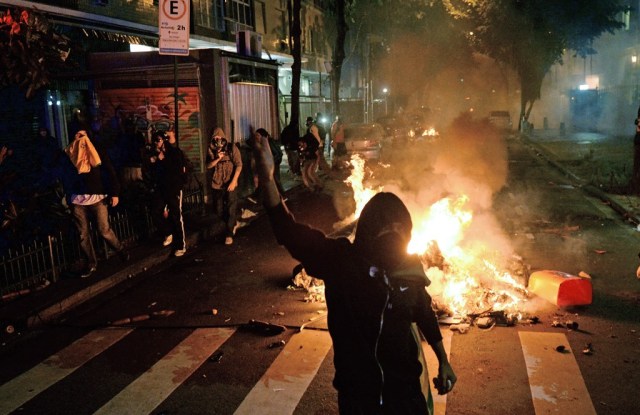 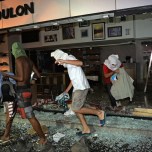 The hopes that some stability had come may be quickly fading in Brazil.

This story first appeared in the July 19, 2013 issue of WWD. Subscribe Today.

Since early June, protests that began out of anger over public transit fare increases have spread across the country, filling the streets of São Paulo, Rio de Janeiro and a dozen other cities. Things had been quieter of late before about 2,000 protesters gathered early Wednesday night in front of the street where Rio de Janeiro state governor Sérgio Cabral lives, in the upscale Leblon neighborhood. They chanted “Get out, Cabral’’ to a samba beat, and protested the misuse of public funds, including the use by the governor of helicopters to take his family to their beach house every weekend at the expense of taxpayers.

After that peaceful protest died down, at about 11 p.m., a group of 200 men wearing masks or with shirts tied around their heads started to attack stores and banks on Leblon’s main street and marched toward the neighboring district of Ipanema. At least 10 bank branches had their windows broken and ATM machines were damaged. The vandals built and set fire to several barricades at different points on the main road using garbage cans and wood from benches.

A store in Leblon owned by Toulon, a Brazilian men’s wear chain, was completely looted as vandals broke all windows and stole even the mannequins. In tears, Eduardo Ballesteros, the store owner, told Globo TV the acts of violence hurt the city and the good people who live and work here. “I never imagined I’d see so much anger,’’ he said.

Not far away, in Ipanema, luxury brands such as Louis Vuitton, H.Stern and Brazilian fashion brands Farm and Mara Mac have large stores on the main street or just a few steps away. Last night, looters weren’t able to reach that part of the neighborhood, as police managed to disperse the crowd.

“We asked them to stay on the lookout for any potential problem and to communicate with other security guards on the street, but we don’t think we need to boost security for now because what we have is already very efficient,’’ said Thiago Costa Rego, NK’s marketing director. “The private security on the street has been increased, and we told our team to get ready to act fast if more acts of violence occur.’’

Louis Vuitton in Brazil said its store in Ipanema will continue to operate normally, and declined to comment on any additional security measures being taken.

Jeweler H.Stern, whose flagship in Rio is located on Ipanema’s main street, already has a robust security system, with metal shutters for store windows and several security guards on the premises, according to its press office. The store is also operating normally.

Recent events have created uncertainty in Brazil’s business environment and hurt sales in many sectors. Companies are reviewing investment plans and postponing expansion projects as the nation’s economy stalls and growth led by consumption and easy credit runs out of steam.

Fashion and luxury brands contacted before this latest event, however, seem undeterred in their goal to expand in one of the world’s largest consumer markets, even amid deteriorating macroeconomic conditions that are made worse by a weakening currency and high inflation.

“There is no change in strategy at all,” Carol Fairweather, Burberry’s chief financial officer designate, said in a conference call last Wednesday. “We’ve been investing in Brazil over the past few years, and for us it’s about having the right Burberry offering there, so that our Brazilian customers who travel see the same merchandise as they would in London or Miami.’’

In 2008, Burberry closed the Brazilian franchise operations it had since 2004, but it returned to Brazil in 2010. It currently has seven stores in the country and plans to open another later this year, Fairweather added.

Dior in February opened a store at Shopping Cidade Jardim, a luxury mecca in São Paulo, with 5,380 square feet of space with the same design created by architect Peter Marino for Avenue Montaigne in Paris. At the time of the opening, chief executive officer Sidney Toledano hinted that Rio de Janeiro could be next, but didn’t detail any plans.

Toledano said Wednesday that Dior has no plans to scale back operations in Brazil, and that “bad weather’’ moments are exactly when companies should invest in markets with great potential.

“We know that after the rain comes the sun,’’ said Toledano. “In Brazil, we know that, medium-, long-term, it’s really good. São Paulo right now is doing well.’’

Brazil’s luxury goods market is expected to grow 15 to 25 percent in the next five years, according to a study by Bain & Co. Revenue from luxury in Brazil in 2012 was estimated at 2.7 billion euros, or $3.54 billion, according to the study. Globally, revenue growth is expected at 4 to 5 percent in 2013 and 5 to 6 percent on average each year until 2015.

But retail in general is not doing so well in Brazil. Retail sales rose in April at less than half the pace economists expected, advancing just 0.5 percent from the previous month after staying flat in March, according to the most recent data by Brazil’s statistics institute, IBGE. Sales rose 1.6 percent from the same month last year.

President Dilma Rousseff has introduced incentives to fuel domestic consumption, which was responsible for much of the strength that kept Brazil’s economy powering ahead while most of the world fell into crisis starting in 2007. The government hoped that tax breaks and subsidized credit for the purchase of furniture and appliances would jump-start growth now, but consumer confidence continues to plummet as inflation corrodes income.

Brazilian families’ year-over-year spending in the first quarter was the slowest in nine years, and consumer confidence in May reached a three-year low. Consumer price increases pro mpted Brazil in April to become the only country among the Group of 20 nations to raise interest rates, which threatens to further limit growth recovery.

The International Monetary Fund slashed Brazil’s gross domestic product growth forecast this year to 2.5 percent from 3 percent previously, an optimistic estimate compared with several economists who see growth of 1.8 percent at the most. Other emerging economies such as China are also expected to expand less this year.

For retailers, June was a very difficult month, as demonstrations that turned violent in many cities and led to the death of at least six people kept shoppers away from stores. Retailers in Brazil lost an estimated 1 billion reais ($440 million) just in the first three weeks after protests started on June 6, according to Daniel Pla, a commerce professor at Fundação Getulio Vargas, a business school in Rio.

A Mercedes-Benz car dealership in Rio was vandalized on June 21, and nearly 40 cars were destroyed. That week, hundreds of stores, including one belonging to Marisa, the largest Brazilian women’s clothing department store chain, were looted in downtown São Paulo. Shopping mall operator Multiplan closed two of its Rio shopping centers early because of concerns over safety. Hundreds of thousands of stores in cities across Brazil simply didn’t open on days when protests were scheduled.

Most luxury brands in Brazil house their stores in shopping malls because of security issues, and weren’t affected by the protests. But the economic slowdown and the current political unrest do inspire concern, even among more established names such as Louis Vuitton, which has been in Brazil since 1989 and has seen its share of boom-and-bust cycles, said Amnon Armoni, a professor at the MBA course in Luxury Management at São Paulo’s FAAP university.

Luxury and fashion brands must be present in Brazil because it’s a market with huge potential. Of its population of 200 million, 40 million recently entered the consumer economy, Armoni said. “But the question is how deep the penetration will be, considering the so-called ‘Brazil cost’ that makes it so expensive and difficult to establish a business here,’’ he added.

Brazil’s protectionist industrial policies impose prohibitive duties on some imports, while taxes and labor costs make it one of the most expensive places in the world to do business, according to the World Bank’s Doing Business study. Brazil imposes much higher tariffs on imports of textiles and apparel, according to the World Trade Organization. In 2012, for 790 textile lines, tariffs averaged 22.7 percent, and for 251 apparel lines, tariffs averaged 35 percent — higher than the 12 percent average for all manufactured goods.

That’s one of the reasons why Zara — which arrived in Brazil in 1999 and has 36 stores — positions itself as a premium brand. The price difference it must charge to make up for importing costs makes it impossible for the brand to fit into the fast-fashion concept it adopted in most markets.

“I’ll bet the hesitation from H&M to set up shop in Brazil has to do with that, and I’m sure right now they are watching everything that’s happening and thinking extra carefully about how to make their business work in Brazil,’’ Armoni added.

H&M said Brazil is one of several interesting markets but that at the moment the Swedish chain has no concrete plans to open stores in the country.

Despite the overall negative mood in Brazil, luxury malls remain optimistic. JK Iguatemi, the newest space in São Paulo dedicated to luxury, will receive new brands this year as expansion plans haven’t changed, said Georgina Brandolini, who represents the group in Europe and declined to provide details. JK Iguatemi is home to Louis Vuitton, Lanvin and Christian Louboutin boutiques, among many others.

Village Mall, which opened in November in Rio and caters to luxury buyers, will soon welcome Anne Fontaine and CH Carolina Herrera stores, adding to a lineup that includes Prada, Vuitton, Tiffany & Co. and dozens of other foreign and local luxury brands.