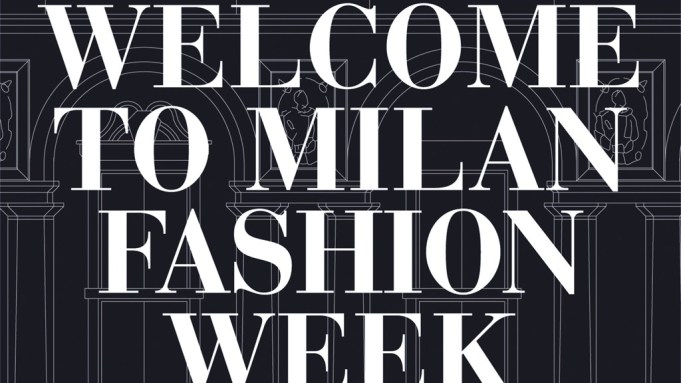 Milan Fashion Week starts Wednesday, a few days after yet another government topple made worldwide news. Prime Minister Enrico Letta resigned following a revolt of his own Democratic Party, clearing the path for rival Matteo Renzi, the mayor of Florence, to become Italy’s new leader of the third government in a year.

The pro-business Renzi has already forged a relationship with the fashion industry, attending Emporio Armani and Ermanno Scervino fashion shows in 2012, and in September last year, announcing with Milan Mayor Giuliano Pisapia a strategic partnership between Florence and Milan focused on the fashion industry and the organization of the Expo, which the latter city will host in 2015.

Photographed wearing a biker jacket and often favoring jeans and informal looks, Renzi attended the presentation of the autobiography of fellow Florentine Roberto Cavalli, “Just Me,” last year. On Saturday, Cavalli was quoted in the Italian daily newspaper La Repubblica saying, “In Florence, a great man is born every 500 years. Matteo is one of these.” That same evening, Renzi sat near Tod’s chief Diego Della Valle and watched the entrepreneur’s Florence soccer team play against Inter. The young politician even asked Luxottica Group chief executive officer Andrea Guerra to be part of the new government, but the executive declined on Sunday, saying he was staying put at the giant Italian eyewear firm.

Despite the political power struggles, the first signs of a pickup in domestic sales are finally bringing some respite from dreary performance locally for several seasons. When the final numbers are in, the fashion industry is expected to close 2013 with a 1.8 percent drop in revenues to 59.27 billion euros, or $78.23 billion at average exchange. But the Italian Chamber of Fashion in its Fashion Economic Trends study predicts 2014 will see a 5.4 percent gain to 62.47 billion euros, or $85.55 billion at current exchange, led by exports but also lifted by a renewed positive contribution of consumer spending in Italy. This performance is close to 2011 levels, according to the study.

The fall shows begin here as Versace is said to be finalizing a deal to sell a minority stake, and rumors build around a possible sale of the Roberto Cavalli group. Cavalli ceo Gianluca Brozzetti unexpectedly left last month on the eve of the opening of Cavalli’s biggest store, to be unveiled on Saturday on Via Montenapoleone.

The week will see the debut of Jeremy Scott as creative director of Moschino and of Graeme Black at Les Copains, while a design team will present its fall collection at Jil Sander after the namesake designer left her brand for the third time in October. Francesca Ruffini, wife of Moncler chairman Remo Ruffini, is presenting her line Coast+Weber+Ahaus for the first time during Milan Fashion Week on Thursday at Giacomo Bistrot.

Store openings include La Perla’s newly renovated Via Montenapoleone unit, Maurizio Pecoraro’s first shop, and units for Les Copains on Via della Spiga and Giambattista Valli on Via Sant’Andrea.

For the first time in more than three decades, a Gianfranco Ferré show will not take place in Milan, as rumors continue to swirl around parent company Paris Group relocating operations to Dubai.

Prada will host an exclusive event Thursday evening, following its runway show, to mark the next chapter of “The Iconoclasts” series with stylist Edward Enninful molding the visual identity of the brand’s two Via Montenapoleone stores. (For more on the project, see page 19.)

Also that evening, Vogue Italia’s Franca Sozzani will host a party in honor of Giancarlo Giammetti for the presentation of his autobiography “Private: Giancarlo Giammetti.” The editor is also part of the judging panel for the 2014-15 International Woolmark Prize competition, the winner of which is to be revealed at Milan’s Museo Della Triennale on Friday.

Jane Reeve, the newly installed ceo of the Italian Chamber of Fashion, said billboards advertising Milan Fashion Week will welcome visitors at Linate and Malpensa airports and at the main train station, and that shows will be live-streamed at La Rinascente department store for the first time.

“We want to bring fashion to the public in some form,” said Reeve. Also, there are plans to open the Chamber’s Fashion Hub to a different school each season, and students from the Istituto Marangoni will be the first to represent their work.

“I see no reason not to open to international schools, too, in the future,” she added. “We need to support the formation of new talents.”

Executives expressed confidence in the months ahead. Versace ceo Gian Giacomo Ferraris said he expected “to continue to see double-digit growth, confirming the performance of the past three years. This year will also be dedicated to consolidation and set the foundations for a strong development in five years. With the arrival of a new minority partner and new financial resources, we will initiate a three-year plan of investments centered on retail, the development of Versus Versace, marketing and e-commerce.”

The company is set to unveil a sprawling boutique in the prestigious Galleria Vittorio Emanuele II in Milan by this summer. Other significant openings include units in Hong Kong, Istanbul, Rio de Janeiro and Moscow, in addition to other key locations in China, Korea and North America.

Gucci president and ceo Patrizio di Marco said the company this year will “continue on the path of implementing the brand’s strategy toward a higher positioning, with a focus on products with a higher average value, encapsulating Gucci’s quality, creativity, innovation and Italian craftsmanship.” The executive noted that further committing to Made in Italy production, Gucci “will be laying the foundations of the relaunch of the historic Florentine brand Richard Ginori,” which Gucci acquired last year.

In 2014, the luxury brand will celebrate its 50th anniversary in Japan. This year also marks the company’s commitment to Russia as it now has direct control of its operations in the country.

Missoni ceo Alberto Piantoni defined 2013 “a difficult year emotionally,” given the death of founder Ottavio Missoni and the disappearance of his son Vittorio, but, financially, “business is growing 4 to 5 percent on a yearly basis.”

Creative director Angela Missoni and her brother Luca have delegated executive decisions to Piantoni. “I am now free to focus on creativity and design,” said Angela Missoni, adding that she is strengthening and fine-tuning her design team. This season, the collection will be presented on fashionable Via Savona and not at the city’s Fabbrica del Vapore, owing to a conflicting exhibition on Vincent Van Gogh.

Piantoni denied ongoing speculation about a sale of the fashion house. “The family wants to retain total control of the brand,” said Piantoni, noting that Vittorio’s son Giacomo has joined the board, flanking Angela and Luca Missoni.

Stores are expected to be opened in Moscow, Turkey (two units) and in Mumbai, India, this year.

Michele Norsa, ceo of Salvatore Ferragamo, also sees “potential” in 2014, after registering double-digit growth last year in all markets except for Japan, due to currency issues. The Florence-based company will hold an event on Sunday, “A Special View of Salvatore Ferragamo’s Atelier,” at the Accademia di Brera, in partnership with Vogue Italia.

“We are rebuilding Salvatore Ferragamo’s original atelier, presenting a selection of his works and designs. It’s an important homage to him and also recognizes the role of Milan and its fashion week,” said Norsa.

As it continues to expand globally — an airport boutique in Shenzen designed by architect Massimiliano Fuksas was unveiled in December and a unit in Chengdu opened in January — Ferragamo will open its fourth boutique in Brazil, in Rio de Janeiro, before the summer, to coincide with the World Cup in that country this year.

Meissen is also leveraging the strength of Milan Fashion Week to present its second couture line, designed by creative director Frida Weyer, at its Via Montenapoleone Villa Meissen on Friday.

“Our couture headquarters is in Milan. We produce clothes, jewelry and furniture in Italy and I believe that a company that wants to be successful globally must first be positioned domestically. It’s a question of taste, buyers and opportunity,” said Christian Kurtzke, ceo of the historic German ceramics company. “Meissen Couture is a 300-year-old start-up, leveraging three centuries of heritage, with collections substantially influenced by the 18th century, 700,000 molds of shapes of ceramics since 1710 and 60,000 designs.”

“The culture of Italy is unique, the economy and politics have an impact on how fast the country can evolve,” he said. “But whenever there is a crisis, Italians are even more motivated — regardless of specific problems, they look at the essence. Creativity and their lifestyle are fundamental and nobody can take that away.”

Mario Filippi Coccetta, an owner of the Fabiana Filippi label, known for its luxury cashmere looks, aims to expand the brand in the U.S. and in China.

“We proved that our brand had been illegally registered in China and, after a two-year hiatus because of this, we have plans to finally develop that market,” said Filippi Coccetta.

On Wednesday, Vogue will once again sponsor The Vogue Talents Corner in collaboration with Thecorner.com and on Sunday, it will hold an Erika Cavallini brunch in honor of the late photographer Deborah Turbeville, who died in October.