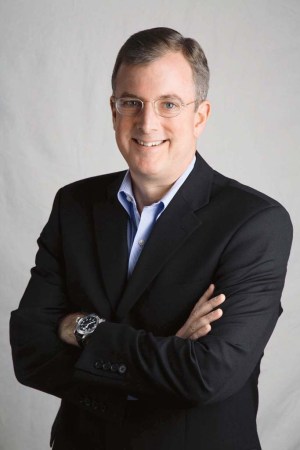 VF Corp. is banking on a big fourth quarter.

This story first appeared in the October 22, 2013 issue of WWD. Subscribe Today.

The Greensboro, N.C.-based apparel giant on Monday reported better-than-expected third-quarter earnings, raised its quarterly dividend and, with its shares hitting an all-time high, enacted a four-for-one stock split in December.

The company also added $30 million to its marketing budget for the fourth quarter, on top of the $10 million added in the just-completed quarter, which will lift its advertising and promotion budget for the year to about 6 percent of its projected revenues, or about $690 million of anticipated revenues of $11.5 billion. In fiscal 2012, A&P approximated 5.3 percent of VF’s $10.77 billion in revenues, or about $570 million.

Eric Wiseman, the firm’s chairman, president and chief executive officer, told WWD that 80 percent of the $40 million second-half increase would be allocated to the company’s outdoor and action sports coalition, which accounts for nearly $3 of every $5 VF takes in, and 70 percent of it to marketing expenditures outside the U.S.

“Coming so late in the year, the increase is really directed at media buying,” he said. “It’s nearly all consumer-facing spend, and our biggest investment is behind The North Face brand in China. There’s a growing outdoor industry in the country and there’s still incredibly low awareness of the brand there. We’re still very small compared to our potential there.”

VF has had regional media buys in China for The North Face in the past, but in the fourth quarter will have its first national television campaign for the brand.

The ceo added that the boost in marketing was instituted because of continuing improvements in gross margin, which grew to 47.6 percent of revenues in the quarter from 46.7 percent in the year-ago period, and the “appropriately conservative” approach the firm has taken to expenses in general. In the third quarter, cost of goods sold rose 3 percent, to $1.73 billion, while selling, general and administrative expenses were up 6 percent to $989.4 million. Year-on-year inventory levels were down 0.4 percent to $1.75 billion.

“We can spend an additional $40 million this year and still deliver our planned 13 percent growth in [earnings per share] for the year while addressing our biggest challenge and opportunity. At a time when consumers aren’t shopping in a robust way, we can increase our voice,” said Wiseman.

Revenues moved ahead 4.7 percent to $3.3 billion from $3.15 billion a year ago, paced by a 6.5 percent advance by the outdoor and action sports coalition to $1.97 billion. Jeanswear revenues rose 4 percent to $747.2 million, while the sportswear and contemporary coalitions were each up less than 1 percent to $155.2 million and $105 million, respectively. The strongest bottom-line gains came from sportswear, with operating income ahead 29.7 percent to $24 million, and jeanswear up 20.5 percent to $158.3 million. Profits at the contemporary unit contracted 29.6 percent to $9.5 million.

VF said that contemporary is expected to perform better in the fourth quarter and that Seven For All Mankind’s business in Europe was up 10 percent during the quarter despite what the firm described as a “challenging business environment” for the contemporary market in general.

Wiseman described Timberland, acquired in September 2011, as “well ahead of the assumptions we made from an earnings contribution standpoint. We’ve reduced the size of the footprint in some channels of distribution and reduced the size of the product line. We’re focusing on the core product categories and on doing fewer things but doing them better. We’re making a lot more money. What we haven’t accomplished yet is achieving the revenue potential that’s there.”

Retail traffic has picked up since the end of the government shutdown, Wiseman said, but he wasn’t certain whether the end of the political impasse, the arrival of colder weather or other factors had sparked the improvement.