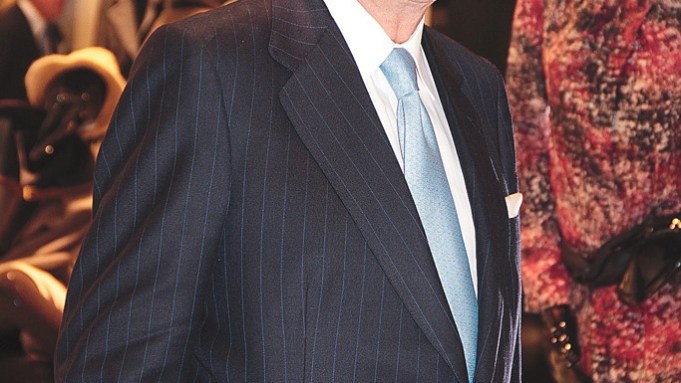 Don Alberto Baillères, owner of the Grupo Bal conglomerate and among Mexico’s richest entrepreneurs, believes that El Palacio de Hierro transcends retailing. In his eyes, it’s a national institution that make Mexicans proud and has an emotional and cultural connection to the population.

“He is very rich, very private and very normal. I don’t think he thinks that differently from the rest of us,” said José Maria Blanco, chief executive officer of El Palacio de Hierro. “He’s told me that Palacio should not have too many stores. He says, ‘Palacio should be the best store. I don’t want it to be the largest store.’”

Though Baillères owns a web of diversified businesses — from mining and silver production to insurance, a stock brokerage, investment funds, a brewery and a university — he stays close to El Palacio de Hierro.

To the outside world, he’s low-profile. Inside El Palacio, he’s a formidable presence. Executives at the store say Baillères is very involved in which brands should be carried, real estate decisions, the design of stores, the advertising and branding the business. In fact, he came up with El Palacio’s enduring and hugely popular tag line, “Soy Totalmente Palacio.” Translation: “I am totally Palacio.”

“He’s got branding under his skin, like that Frank Sinatra song,” said Ernesto Izquierdo Desoche, chief operating officer of the store. “He personally supervises all image campaigns.”

“He cares enough about the brand to get personally involved in the advertising. He looks at the casting, the music, the copy. Not many chairmen would do that,” added José Alberto Terán, ceo of Terán/TBWA, the agency of record for El Palacio de Hierro.

“He has a view of creating wonderful environments, so when you are standing in front of the store and about to go in, there’s this sense of arrival,” said Javier Sordo Madaleno, one of Mexico’s most prominent architects, who has created many of El Palacio’s facades.

“We see him every month or six weeks, and our ceo sees him every two weeks,” noted Carlos Salcido, the store’s chief marketing officer. “He’s got many companies, but when he speaks to us about retail, he is very focused. His vision is very clear: He wants to have the best department store in Mexico and the best luxury destination in Latin America.”

“He calls us his kids,” added Françoise Lavertu, communications director for the retailer.

Baillères graduated in 1950 from Culver Military Academy in Indiana, where his family sent him to study. This experience taught him discipline and to act with precision in business and in life.

While studying, he worked at Banco de Comercio, rising to branch manager in 1956, a year prior to his graduation. A year later, he joined Cervecería Moctezuma, a Mexican brewery, where he rose to ceo in 1964 and added the title of chairman three years later.

With his father, Raúl Baillères — a Mexican industrialist who started in the groceries and grains business and got into mining and a host of other ventures — he purchased El Palacio de Hierro in 1963, and became its ceo and restructured the company.

Baillères is currently executive president and chairman of Grupo Bal, which he founded in 1967, and is a member of several other corporate boards.

An intensely private person, Baillères virtually never extends interviews, though he’s frequently pursued by the media. Yet on the eve of the 125th anniversary of his retail jewel, Baillères broke tradition by agreeing to an interview with WWD. Here’s what he said about the timeless department store.

WWD: At 125, what are the biggest challenges ahead for El Palacio de Hierro?
Alberto Baillères: Retailing has always been a very dynamic and competitive industry. But in the last two decades, retailing has become also a very innovative business. Traditional department stores are facing the challenges imposed by new players, new formats and new distribution channels. Marketing and merchandising are also evolving rapidly. The challenge is to keep efficiently adapting to the new marketplace and technology, and to anticipate new trends to better satisfy consumers’ needs and aspirations.

WWD: How did you come up with the store’s famous slogan, “Soy Totalmente Palacio”?
A.B.: I used to have long brainstorming sessions on marketing and advertising with our advisors [Terán/TBWA] and senior executives. One day, I was trying to express my vision on the main message for our advertising campaign. I was saying concurrent but disconnected phrases, like “El Palacio de Hierro is an inspired vision consumers share,” “an unforgettable experience consumers love,” “an intimate feeling consumers get,” “an aspiration,” “a real dream,” on how well they look, how well they live and how well they feel; how deeply the consumer and Palacio are identified with each other.

Then, Palacio is its customers, consumers are Palacio de Hierro, I am Palacio…I am totally Palacio…Eureka! Soy Totalmente Palacio.

WWD: What gives you the most satisfaction and happiness in owning an important retail company?
A.B.: Retailing is an exciting industry. Of course, it is about business strategy, merchandising, logistics and service. But mainly, it is about the psychology of intimately communicating with customers.…It is about numbers, but also about the art of beautiful displays and functional and inspiring architecture. It is about the magic world of fashion and a way of living. It is much more than just showrooms, but about lively theaters of expectations, findings and even surprises.

WWD: What was your most memorable or pivotal moment at Palacio?
A.B.: The most memorable time was when my father and I acquired it from French investors. It was only two stores, and the company was without any plans for expansion, lacking a sound business strategy.

WWD: Why did you decide to buy the business, and why is it a good fit into the Grupo Bal portfolio of companies?
A.B.: I always envisioned being involved in retailing. We were running operations in mining, brewery and finance. So, retailing was the new frontier, and we found the opportunity to acquire El Palacio de Hierro.

In those years, the Mexican economy was quite closed to international economies. Therefore, diversification was the only option for a high-growth strategy.

WWD: How much time do you spend with the team at El Palacio de Hierro?
A.B.: I follow the sales daily, store by store. I am in constant contact with the team.

WWD: How is Mexico’s retail landscape changing, and how much room is there to grow El Palacio de Hierro, domestically or in other countries?
A.B.: The Mexican retailing market is as competitive and innovative as it is in any other part of the world, and it is changing as fast. El Palacio de Hierro’s growth is closely linked with the growth of the country and the widening of the middle classes. I wholeheartedly trust Mexico’s future.