Starting a swimwear or caftan line in North Dakota might not seem like an intuitive fit. Assuming you are not depending on local Dakotans to buy bikinis, however, it just may be worth a look. North Dakota joins Texas, Utah, Georgia and Oklahoma as the top five “2019’s Best States to Start a Business” by personal finance web site WalletHub, ranking the 50 states in order of how plush is their welcome mat for start-up companies.

The lower end of the list looks unfavorably on the Northeast Coast: Connecticut, New Hampshire, New Jersey and Rhode Island join notorious outlier Hawaii as the five toughest states for entrepreneurial success. Looking at the ranking map, in fact, the clump of lowest-ranking states roughly mirrors the original 13 colonies. Those with a pioneering spirit and a proverbial seed to sow are just as well off heading west or south now, as they were in 1770.

• Business environment accounts for half of the 100 points, including categories such as “start-ups per capita, five-year business “survival rate,” job growth, GDP growth, and both “industry-cluster strength” and industry variety.

• Access to resources makes up another 25 points, and by “resources” they mean humans, brains and money.

In addition to the composite scoring, the report also highlights the “best and worst” of a sampling of metrics. These specific superlatives reveal very few patterns, and some counterintuitive. New Jersey and Connecticut, for example, despite being in the overall bottom five, have among the “most educated” workforce swirling around their respective ivied educational institutions. Georgia and Oklahoma are not outstanding in any particular individual parameter, instead apparently scoring a well-rounded “high enough” score to make the overall top five. 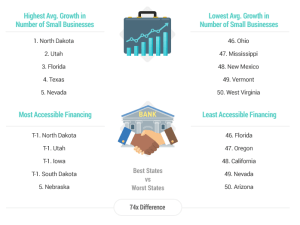 North Dakota makes three top-five lists but is also notably stingy with incentives, and contrarian Utah ranks very highly in both small business growth and accessible financing, despite its residents enjoying the absolute shortest average work week. (Before setting the GPS to Salt Lake City, however, mind the LDS: some critics say the state’s half Mormon/Latter-day Saints population creates a “corporate culture” that can feel “baffling, isolating” according to media reports, and the lifestyle and politics can be difficult for new residents.)

Meanwhile, some measurements need to be considered in context, and it’s important to look at the big picture. States strong on ranching and fishing such as Wyoming and Alaska report longest work weeks, but don’t expect to find employees willing to sit behind a computer working overtime.

The highly educated populations in Massachusetts and Maryland will naturally demand higher wages. While having great tech infrastructure will naturally win a state some points, boasting low unemployment is deemed unattractive. And with a burgeoning interest in something the government of Bhutan calls “Gross National Happiness,” there is no parallel metric here for that either. Still, the research offers valuable insights for any burgeoning entrepreneur pondering the “where” to do business question.