According to Coresight Research, online grocery shopping might be here to stay post-pandemic.

U.S. shoppers say they will likely continue shopping for groceries online post-pandemic, according to Coresight Research.

Creatures of comfort prefer to stay home — so it should come as no surprise that shopping for groceries online may be an enduring trend, according to Coresight Research.

In its latest U.S. weekly consumer survey that provides detailed updates on changing consumer behaviors amid the coronavirus pandemic, the firm found that some 60 percent of respondents had bought groceries online in the past 12 months, up eight percentage points from the 52 percent that was reported in its annual U.S. online grocery survey, taken in March.

And when online shoppers were asked whether they expect to change their frequency of online grocery shopping post-pandemic, consumers confirmed that they’ve taken to the sudden shift of buying most of their food online, a trend that was significantly “boosted” by the pandemic.

“Some 36 percent of online grocery shoppers do not expect to change their online grocery shopping habits once the crisis eases or ends. We found that almost one-fifth of [shoppers new to buying groceries online] plan to retain their current purchase frequency.” A mere seven percent said they plan to stop buying groceries online once the pandemic eases or ends, they added. 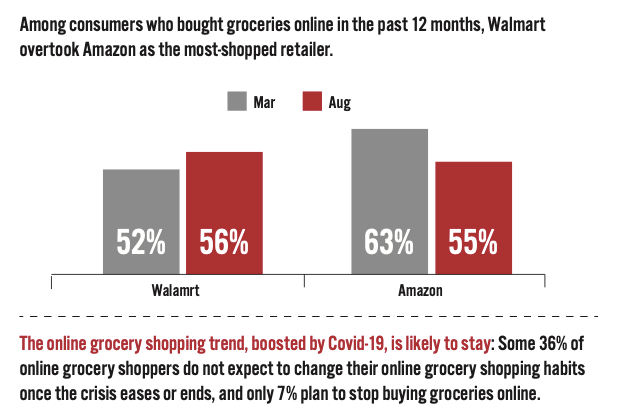 But what does come as a surprise is hearing the news that Walmart overtook Amazon as the most-shopped retailer: The firm said that some 56 percent have bought from Walmart, versus 52 percent in March, indicating that “Walmart’s continued investment in online grocery is paying off in its battle with Amazon. The proportion of online grocery shoppers buying from Amazon declined by nearly eight percentage points to 55 percent, from 63 percent in March.”

“In the past week, Walmart reported 97 percent year-over-year growth in online sales at its Walmart U.S. segment in its second-quarter (including non-grocery orders). Amazon had previously reported a tripling in its global online grocery sales in its second quarter.”

The firm explained, “Squaring these figures with our survey data implies that Amazon grew its U.S. sales primarily through existing customers placing bigger-basket orders or more frequent orders, while Walmart’s growth may also have been fueled by attracting new online shoppers.”

Lastly, avoidance of public places has dropped by five percentage points to 80 percent from 85 percent just last week. “Shopping centers/malls saw a slight decrease in avoidance rate to six in 10 this week but continue to be the most-avoided place,” adding that “This is the lowest level we have seen for one month — although the rate remains high.”