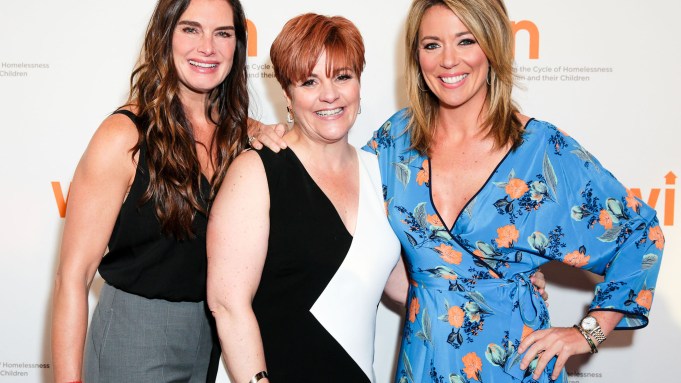 Christine Quinn, president and chief executive officer of WIN, was intent on clearing up prevailing misperceptions about the homeless and raising awareness about the high percentage of women and kids caught in the quandry.

“New Yorkers have to understand her. See her for who she is, not where she lives,” Quinn implored the crowd of 800-plus at Chelsea Piers for Tuesday’s Way to WIN Dinner. “Scary, frightening and beyond help” is how many view the homeless, Quinn said.  “They’re the forgotten faces, but they’re children just like yours. Eighty percent are survivors of domestic violence.”

WIN board chair Jaqui Lividini underscored the mission of WIN, to shelter homeless women and their children and get them back on their feet. “We’re here to break the cycle of homelessness,” said Lividini, who is leaving her post as chair this year.

Behind the speakers was a huge banner with the WIN theme “Forgotten No More” and filling the event space were hundreds of red, yellow and orange balloons, each representing an individual’s contribution on the night, in addition to ticket sales. The “Karin and Steve Sadove Balloon Challenge” is named after the couple that invented the format for motivating spur of the moment contributions and the Sadoves are WIN activists. They matched the first $25,000 raised through the challenge.

Between the balloons, ticket sales and a silent auction, more than $2.8 million was raised, surpassing the goal for the evening. The money benefits WIN’s shelters around the city and WIN programs that help homeless women find permanent housing and jobs, provide counseling, day care, a 10-week day camp and other supportive services. WIN houses nearly 10 percent of the city’s homeless families.

Also during the evening, Paula Bennett, president and ceo of J. Jill, and Efraim Grinberg chairman and ceo of Movado Group were honored; a dinner with Brooke Shields and CNN anchor Brooke Baldwin was auctioned off, and finalists from The Peter Jennings Prize: A Child’s View poetry contest for WIN children were introduced on stage by the widow of Jennings, Kayce Freed Jennings. “If Peter were here tonight, he’d be hanging with the kids and reveling in their wisdom,” she said.

One WIN client, Dinamarca Brito, recounted her plight, from being beaten up in high school, to bouncing from shelter to shelter and feeling “worthless, incompetent and a bother to everyone” but then getting a second chance by WIN and its support services, including proper clothes for job interviews and access to job fairs, enabling her to get back in the workforce as a health aide, support her son and see a bright future.