What Fashion Statements Mean on the TED Talk Stage

Garnering more than 14 billion views to date, the TED Talk stage — or the "nerd red carpet” — is also a place to champion fashion with a cause.

“Ideas worth spreading” is the tag line of the nonprofit TED, which powers short, powerful talks in 18 minutes or less, but another idea worth spreading is how women are using the TED stage to showcase women-owned designs and sustainable choices.

Speaking with Erin Allweiss and Melody Serafino, cofounders of No. 29, the communications firm for cause-based businesses, the TED stage is a “platform for change and [fashion] statements.” They put together a collection of the best-of fashion — on the TED stage and off — since forging a relationship with TED, which extends back nine years, ensuring women are dressed comfortably and powerfully.

To date, the TED Talk platform has garnered more than 14 billion views, with the Oscars tallying 29.6 million viewers this year, according to reports. “TED is like the nerd red carpet for the Met ball or Oscars. So just like your fashion choices matter on those stages, they can also matter on the TED stage,” said Anjali Kumar to WWD. Despite being an accomplished author, attorney and sharing insights from her near decade of experience at two innovative businesses, her humble journey to “find God” detailed in her book and later a speaker series with TEDWomen, “My Failed Mission to Find God — And What I Found Instead,” garnered more than 3 million views, across TED and YouTube streaming platforms. 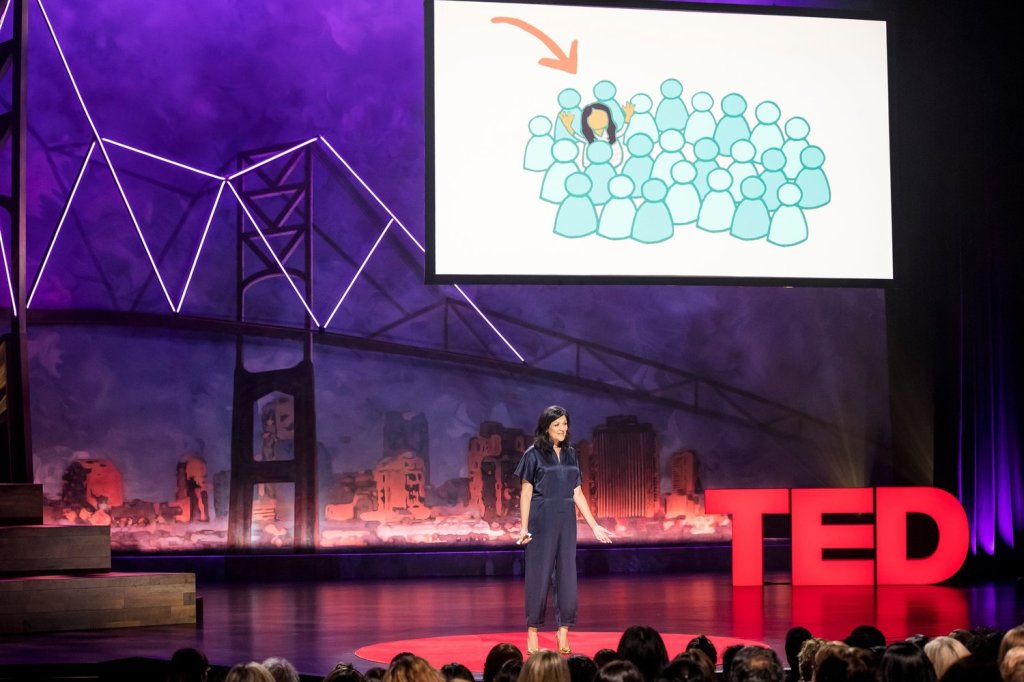 Thanks to the almighty Internet, the video has circulated around the world, being translated into 19 languages. But with such response to her message, another important cue was her jumpsuit from the sustainable, female-founded brand Zero + Maria Cornejo. Kumar balances Brooklyn and Indian American roots, having nurtured innovation at Google and Warby Parker, as senior counsel at Google and former head of social innovation at Warby Parker, respectively before putting the spotlight on conversations embracing diversity, gender quality and innovation in the workplace.

“When I have the spotlight on me, it’s my responsibility to promote this message,” Kumar said about the importance of shining a spotlight on her sustainable, gender equitable choices in dress. Kumar cites the need to feel “strong” and “comfortable” in the high-pressure moment. She posed the question: “So what do you want to say, in addition to your words from stage, when the world is watching?”

Designer and author of the blog, “The Aesthetics of Joy,” Ingrid Fetell Lee spoke of the very joy she vies to create, on the TED stage in “Where Joy Hides and How to Find It,” racking up more than 2.2 million views since being published on ted.com in April 2018. “Color,” she stated in her TED talk, “in a very primal way, is a sign of life, a sign of energy,” and embodied her message, wearing the “bright and colorful” Loop dress, also from Zero + Maria Cornejo. On how her wardrobe aligns with her purchasing practices, Lee also supported wearing women designers and smaller labels. “As a designer myself, it means a lot to feel like I’m supporting other female creatives, that we’re all growing together,” she said to WWD. 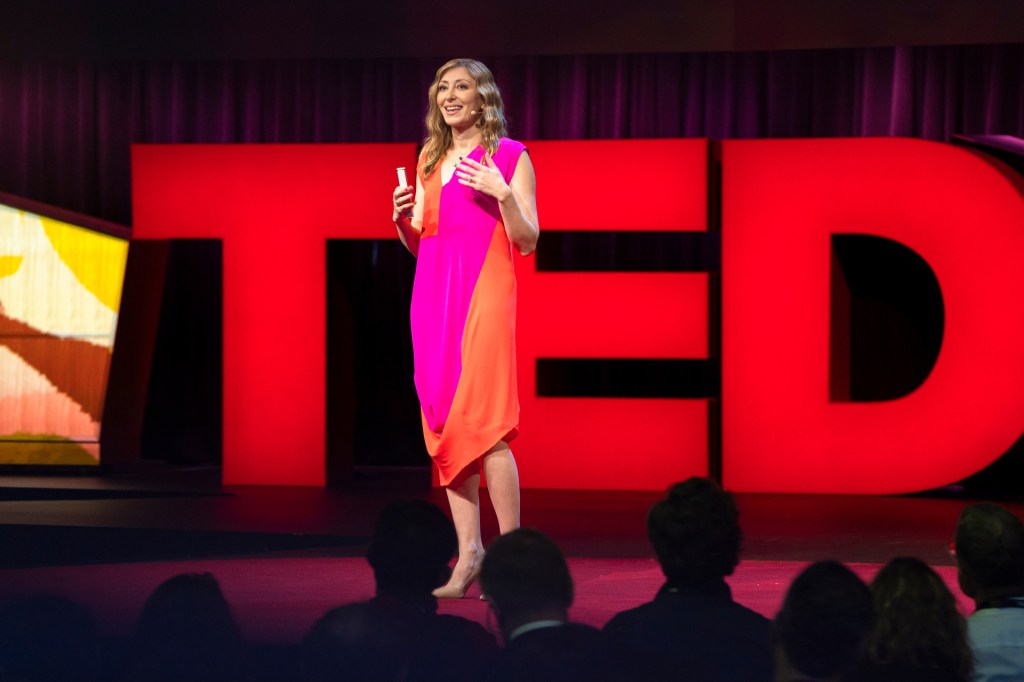 Several women behind the scenes of the TED stage this year wore Zero + Maria Cornejo, with garments being lent as a courtesy. Sustainable messaging was also communicated by Rachel Comey and Rent the Runway. Kyle Landman, communications director at Zero + Maria Cornejo, told WWD that the TEDWomen conference in November 2018, held in Palm Springs, Calif., was the first formal introduction to the women of TED: Helen Walters, head curator of TED; Kelly Stoetzel, head of conferences at TED, and Anna Verghese, executive director of the Audacious Project at TED. Shortly after, the partnership began.

The opportunity to make a subtle statement on sustainability was of concern for the women of TED. “This is something my fellow cohosts and I considered this year as we chose our outfits,” Verghese said. 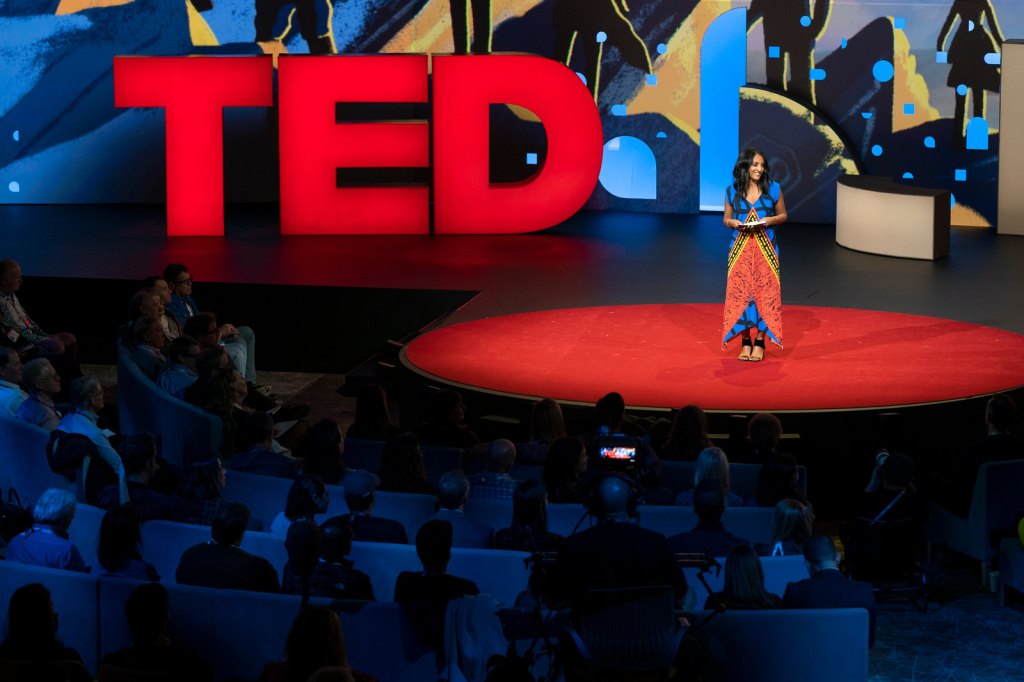 Kumar was already a fan of the brand, having worn the jumpsuit at her TEDWomen talk, and made the introduction to the internal team. “It made a lot of sense for us to dress the women working behind the scenes. If we can help the women of TED feel powerful, put together and like themselves, we’ve done our small part to help them get their job done,” Landman said. Off the stage, Chrissy Teigen, Anne Hathaway, Tracee Ellis Ross and others have worn the designs.

Maria Cornejo, the designer behind the women-owned, locally produced New York label, Zero + Maria Cornejo told WWD that women are drawn to the designs because “we design with a heart.” On the partnership with TED, Cornejo said, “It’s more about supporting women in any way I can. I just want them to go out there, and do their thing and forget about what they are wearing.”

Whatever the stage, too, women are more often denigrated for choice of dress. When Anna Sorokin was found guilty of grand larceny in late April, “her sartorial outfit choices” claimed more fame in headlines than did her lavish lifestyle or crimes of stealing more than $200,000 from investors, banks and many of her friends, as previously reported in WWD. In matters of dress: the courtroom is to imitators, as the TED stage is to innovators. In high-profile positions, it’s in figures such as former first lady and activist, Michelle Obama, we pay attention to the message, the medium and as gender dictates more heavily — her outfit. Although Silicon Valley’s most innovative minds are often championed for uniform dressing and a laissez-faire approach, further inspiration may be drawn from the TED stage, as a more vocal display of values.